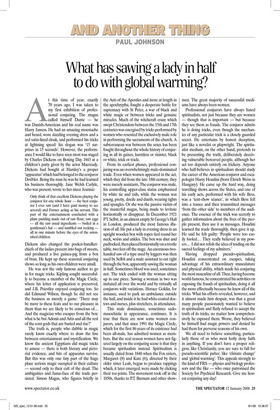 What has sawing a lady in half to do with global warming?

At this time of year, exactly 70 years ago, I was taken to my first exhibition of professional conjuring. The magus called himself Dante — he was Danish-American and his real name was Harry Jansen. He had an amazing moustache and beard, wore dazzling evening dress and a red satin-lined cloak, and performed his tricks at lightning speed: his slogan was ‘15 surprises in 15 seconds’. However, the performance I would like to have seen most was staged by Charles Dickens on Boxing Day 1843 at a children’s party given by the actor Macready. Dickens had bought at Hamley’s a proper ‘apparatus’ which had belonged to the conjuror Doëbler. Being the man he was he had learned his business thoroughly. Jane Welsh Carlyle, who was present, wrote to her niece Jeannie:

Only think of that excellent Dickens playing the conjuror for one whole hour — the best conjuror I ever saw (and I have paid money to see several) and Forster acting as his servant. This part of the entertainment concluded with a plum pudding made out of raw flour, raw eggs — all the raw usual ingredients — boiled in a gentleman’s hat — and tumbled out reeking — all in one minute before the eyes of the astonished children.

Dickens also changed the pocket-handkerchiefs of the ladies present into bags of sweets, and produced a live guinea-pig from a box of bran. He kept up these seasonal conjuring shows so long as his own children were small.

He was not the only famous author to go in for magic tricks. Kipling sought successfully to become a member of the Magic Circle, where his letter of application is preserved, and J.B. Priestley enjoyed conjuring too. So did Edmund Wilson, though he did not see the business as merely a game: ‘There may be more to these feats and to our pleasure in them than we are likely to be conscious of... And the magician who escapes from the box: what is he but Adonis and Attis and all the rest of the corn gods that are buried and rise?’ The truth is, people who dabble in magic rarely know exactly where to draw the line between entertainment and mystification. We know the ancient Egyptians did magic tricks to amuse — there is both literary and pictorial evidence, and bits of apparatus survive. But this was only one tiny part of the huge place serious magic occupied in their culture — second only to their cult of the dead. The ambiguities and Janus-face of the trade persisted. Simon Magus, who figures briefly in the Acts of the Apostles and more at length in the apochrypha, fought a desperate battle for supremacy with St Peter, a war of black and white magic or between tricks and genuine miracles. Much of the witchcraft craze which swept Christendom between the 15th and 17th centuries was energised by tricks performed by women who resented the exclusively male role in performing the sacraments of the church. A subterranean war between the sexes has been fought throughout the whole history of conjuring in all its guises, harmless or sinister, black or white, trick or trade.

From its earliest phases, professional conjuring was an overwhelmingly male-dominated trade. Even when women appeared in the act, which they did from the late 18th century, they were merely assistants. The conjuror was male, his controlling upper-class status emphasised by white tie and tails, while the woman was young, pretty, docile and dumb, wearing tights and spangles. Or she was the passive victim of the masterful magus, being made to levitate horizontally or disappear. In December 1921 P.T. Selbit, in an almost empty St George’s Hall in London, produced the most famous illusion of all. He put a lady in evening dress in an upright wooden box with ropes tied round her neck, wrists and ankles. The box was shut and padlocked, then placed horizontally on a trestle table, two feet off the stage. An enormous twohanded saw of a type used by loggers was then used by Selbit and a male assistant to cut right through the box, apparently sawing the woman in half. Sometimes blood was used, sometimes not. The trick ended with the woman sitting up in one piece. Sawing a woman in two was imitated all over the world and by virtually all conjurors with variations. Horace Goldin, for instance, used to park an ambulance outside the hall, and inside it he had white-coated doctors and nurses, plus stretchers, in attendance.

This male dominance, sometimes sadomasochistic in appearance, continues. It is true that there are now some women conjurors, and that since 1991 the Magic Circle, which for the first 86 years of its existence had been all-male, has admitted women as members. But the real reason women have not figured largely on the conjuring scene is that they became spiritualists instead. Spiritualism is usually dated from 1848 when the Fox sisters, Margaret (8) and Kate (6), directed by their older sister Leah, began to produce rappings which, it later emerged, were made by clicking their toe-joints. The movement took off in the 1850s, thanks to P.T. Barnum and other show men. The great majority of successful mediums have always been women.

Professional conjurors have always hated spiritualists, not just because they are women — though that is important — but because they see them as frauds. The conjuror admits he is doing tricks, even though the mechanics of any particular trick is a closely guarded secret. He entertains by honest deception, just like a novelist or playwright. The spiritualist medium, on the other hand, pretends to be presenting the truth, deliberately deceiving vulnerable bereaved people, although her act too depends entirely on trickery. Anyone who half-believes in spiritualism should study the career of the American conjuror and escapologist Harry Houdini (born Ehrich Weiss in Hungary). He came up the hard way, doing travelling shows across the States, and one of his early acts, performed with his wife Bess, was a ‘tent-show séance’, in which Bess fell into a trance and then transmitted messages ‘from the other side’ to members of the audience. The essence of the trick was secretly to gather information about the lives of the people present, then use it as messages. Houdini learned the trade thoroughly, then gave it up. He said he felt guilty: ‘People were too easily fooled... They really believed in my powers... I did not relish the idea of trading on the sacred feelings of my admirers.’ Having dropped pseudo-spiritualism, Houdini concentrated on escapes, taking advantage of his extraordinary musculature and physical ability, which made his conjuring the most masculine of all. Then, having become world-famous, he concentrated his activities on exposing the frauds of spiritualists, doing it all the more effectually because he knew all of the tricks. What his efforts revealed, however, and it almost made him despair, was that a great many people passionately wanted to believe in spiritualism and flatly refused to accept the truth of its tricks, no matter how comprehensively he exposed them. Worse, they believed he himself had magic powers and denied he had them for perverse reasons of his own.

We all need to believe something, particularly those of us who most hotly deny faith in anything. If you don’t have a proper religion, like Christianity, you are sure to fall for pseudo-scientific patter, like ‘climate change’ and ‘global warming’. This appeals strongly to the kind of FRS — physics and biology professors and the like — who once patronised the Society for Psychical Research. Give me honest conjuring any day!