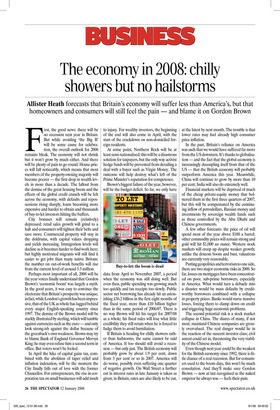 The economy in 2008: chilly showers but no hailstorms

Allister Heath forecasts that Britain’s economy will suffer less than America’s, but that homeowners and consumers will still feel the pain — and blame it on Gordon Brown First, the good news: there will be no recession next year in Britain. But while avoiding ‘the Big R’ will be some cause for celebration, the overall outlook for 2008 remains bleak. The economy will not shrink but it won’t grow by much either. And there will be plenty of pain to go round. House prices will fall noticeably, which means that most members of the property-owning majority will become poorer — the first drop in wealth levels in more than a decade. The fallout from the demise of the great housing boom and the effects of the global credit crunch will be felt across the economy, with defaults and repossessions rising sharply, loans becoming more expensive and harder to obtain and thousands of buy-to-let investors hitting the buffers.

City bonuses will remain (relatively) depressed; retail sales growth will grind to a halt and consumers will tighten their belts and save more. Commercial property will stay in the doldrums, with capital values dropping and yields increasing. Immigration levels will decline as it becomes harder to find work here; but highly motivated migrants will still find it easier to get jobs than many native Britons: the number on out-of-work benefits will rise from the current level of around 5.3 million.

Perhaps most important of all, 2008 will be the year voters finally understand that Gordon Brown’s ‘economic boom’ was largely a myth. In the good years, it was easy to convince the electorate that Britain’s prosperity was unique; in fact, while London’s growth has been impressive, that of the UK as whole has lagged behind every major English-speaking country since 1997. The demise of the Brown model will be starkly illustrated by sterling, which will tumble against currencies such as the euro — and only look strong-ish against the dollar because of the greenback’s own weakness. Brown may try to blame Bank of England Governor Mervyn King; he may even refuse him a second term in office. But voters won’t be fooled.

In April the hike of capital gains tax, combined with the abolition of taper relief and inflation indexation, will be the moment the City finally falls out of love with the former Chancellor. For entrepreneurs, the rise in corporation tax on small businesses will add insult to injury. For wealthy investors, the beginning of the end will also come in April, with the start of the crackdown on non-domiciled foreign residents.

At some point, Northern Rock will be at least semi-nationalised; this will be a disastrous solution for taxpayers, but the only way activist hedge funds will be prevented from derailing a deal with a buyer such as Virgin Money. The outcome will help destroy what’s left of the Prime Minister’s reputation for competence.

Brown’s biggest failure of the year, however, will be the budget deficit. So far, we only have data from April to November 2007, a period when the economy was still doing well. But even then, public spending was growing much too quickly and tax receipts too slowly. Public sector net borrowing has already hit an astonishing £36.2 billion in the first eight months of the fiscal year, more than £10 billion higher than in the same period of 2006/07. There is no way Brown will hit his target for 2007/08 as a whole; his fiscal rules will lose what little credibility they still retain when he is forced to fudge them to avoid humiliation.

If Britain is heading for chilly showers rather than hailstorms, the same cannot be said of America. It too should still avoid a recession — but only just. The British economy will probably grow by about 1.9 per cent, down from 3 per cent or so in 2007. America will do worse, possibly even suffering one quarter of negative growth. On Wall Street a further cut in interest rates in late January is taken as given; in Britain, rates are also likely to be cut, at the latest by next month. The trouble is that lower rates may fuel already high consumer price inflation.

In the past, Britain’s reliance on America was such that we would have suffered far more from the US downturn. It’s thanks to globalisation — and the fact that the global economy is increasingly decoupling itself from that of the US — that the British economy will probably outperform America this year. Meanwhile, China will continue to grow by more than 10 per cent; India will also do extremely well.

Financial markets will be deprived of much of the cheap private-equity money that bolstered them in the first three quarters of 2007, but this will be compensated by the continuing inflow of petrodollars, Russian money and investments by sovereign wealth funds such as those controlled by the Abu Dhabi and Chinese governments.

A few other forecasts: the price of oil will spend most of the year above $100 a barrel; other commodity prices will remain strong and gold will hit $1,000 an ounce. Western stock markets will creep up despite weaker growth; unlike the dotcom boom and bust, valuations are currently very reasonable.

Putting geopolitics and terrorism to one side, there are two major economic risks in 2008. So far, losses on mortgages have been concentrated on poor, sub-prime borrowers, especially in America. What would turn a debacle into a disaster would be mass defaults by creditworthy borrowers combined with a collapse in property prices. Banks would nurse massive losses, forcing them to clamp down on credit and triggering huge economic problems.

The second potential risk is a stock market collapse in China. The shares of many, if not most, mainland Chinese companies are grossly overvalued. The real danger would lie in the reaction of the nascent investor class; civil unrest could set in, threatening the very viability of the Chinese model.

Even though next year could be the weakest for the British economy since 1992, there is little chance of a real recession. But for consumers used to the boom days, this won’t be much consolation. And they’ll make sure Gordon Brown — now at last recognised as the naked emperor he always was — feels their pain.