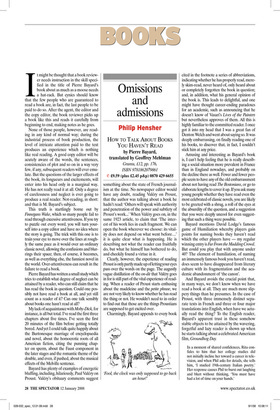 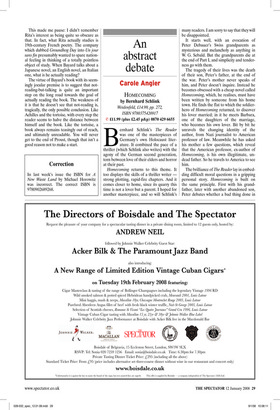 HoW To TALK ABoUT BooKS YoU HAVEN’T READ by Pierre Bayard, translated by Geoffrey Mehlman Granta, £12, pp. 176, ISBN 9781862079861 ✆ £9.59 (plus £2.45 p&p) 0870 429 6655 It might be thought that a book reviewer needs instruction in the skill specified in the title of Pierre Bayard’s book about as much as a moose needs a hat-rack. But cynics should know that the few people who are guaranteed to read a book are, in fact, the last people to be paid to do so. After the agent, the editor and the copy editor, the book reviewer picks up a book like this and reads it carefully from beginning to end, making notes as he goes.

None of those people, however, are reading in any kind of normal way; during the industrial process of book production, the level of intricate attention paid to the text produces an experience which is nothing like real reading. A good copy editor will be acutely aware of the words, the sentences, consistencies of plot and so on in a way very few, if any, subsequent readers will ever emulate. But the questions of the larger effects of the book, its longueurs and excitements, will enter into his head only in a marginal way. He has not really read it at all. Only a degree of carelessness and neglect is ever going to produce a real reader. Not-reading, in short: and that is M. Bayard’s subject.

This truth is startlingly borne out by Finnegans Wake, which so many people fail to read through excessive attentiveness. If you try to puzzle out every word, you will turn yourself into a copy editor and have no idea where the story is going. The trick with this one is to train your eye to move over the lines at roughly the same pace as it would over an ordinary classic novel, allowing the confusions and blurrings their space; then, of course, it becomes, as well as everything else, the funniest novel in the world. Over-attentiveness can result in the failure to read a book.

Pierre Bayard has written a small study which tries to establish what degree of neglect can be attained by a reader, who can still claim that he has read the book in question. Could one possibly not have read a book at all, and yet still count as a reader of it? Can one talk sensibly about books one hasn’t read at all?

My lack of acquaintance with Moby-Dick, for instance, is all but total. I’ve read the first three chapters about five times. I’ve seen the first 20 minutes of the film before getting totally bored. And yet I could talk quite happily about the Burtonesque marriage of encyclopaedia and novel, about the homoerotic roots of all American fiction, citing the punning chapter on sperm, about the Faust component in the later stages and the romantic theme of the double, and even, if pushed, about the musical effects of the Melville sentence.

Bayard has plenty of examples of energetic bluffing, including, hilariously, Paul Valéry on Proust. Valéry’s obituary comments suggest something about the state of French journalism at the time. No newspaper editor would have any doubt, reading Valéry on Proust, that the author was talking about a book he hadn’t read: ‘Others will speak with authority and penetration of the power and subtlety of Proust’s work...’ When Valéry goes on, in the same 1923 article, to claim that ‘The interest of his work lies in each fragment. We can open the book wherever we choose: its vitality does not depend on what went before...’ it is quite clear what is happening. He is describing not what the reader can fruitfully do, but what he himself has bothered to do, and cheekily found a virtue in it.

Clearly, however, the experience of reading Proust is only partly made up of letting your eyes pass over the words on the page. The augustly vague distillation of the on-dit that Valéry goes in for is still part of the vital experience of reading. When a reader of Proust starts enthusing about the madeleine and the petite phrase, we are not very likely to know whether he has read the thing or not. He wouldn’t need to in order to find out that those are the things Proustians are supposed to get excited over.

Charmingly, Bayard appends to every book cited in the footnote a series of abbreviations, indicating whether he has properly read, merely skim-read, never heard of, only heard about or completely forgotten the book in question; and, in addition, what his general opinion of the book is. This leads to delightful, and one might have thought career-ending paradoxes for an academic, such as announcing that he doesn’t know of Vasari’s Lives of the Painters but nevertheless approves of them. All this is highly familiar to the committed reader. I once got it into my head that I was a great fan of Denton Welch and went about saying so. It was deeply embarrassing, on finally reading one of his books, to discover that, in fact, I couldn’t stick him at any price.

Amusing and interesting as Bayard’s book is, I can’t help feeling that he is really describing a social situation more prevalent in France than in England nowadays, and probably on the decline there as well. Fewer and fewer people seem to have any of the old embarrassment about not having read The Bostonians, or go to elaborate lengths to cover it up. If you ask many young people whether they have read even the most celebrated of classic novels, you are likely to be greeted with a shrug, a roll of the eyes at the absurdity of the question, and a suggestion that you were deeply uncool for even suggesting that such a thing were possible.

Bayard mentions David Lodge’s famous game of Humiliation whereby players gain points for naming books they haven’t read which the other players have — my regular winning entry is Far From the Madding Crowd. But could you play that with anyone under 40? The element of humiliation, of naming an immensely famous book you haven’t read, does seem to have disappeared from literary culture with its fragmentation and the academic abandonment of ‘the canon’.

And Bayard avoids the crucial point that, in many ways, we don’t know when we have read a book at all. They are much more slippery things than he presumes. In the case of Proust, with three immensely distinct separate texts in French and three or four major translations into English, when have we actually read the thing? To the English reader, Bayard’s apparent trust in these somehow stable objects to be attained by the wavering, forgetful and lazy reader is shown up when he starts talking about a celebrated American film, Groundhog Day.

In a moment of shared confidences, Rita confides to him that her college studies did not initially incline her toward a career in television, and when Phil asks for details, she tells him, ‘I studied 19th-century Italian poetry.’ Her response causes Phil to burst out laughing and blurt without thinking, ‘You must have had a lot of time on your hands.’

This made me pause: I didn’t remember Rita’s interest as being quite so obscure as that. In fact, what Rita actually studies is 19th-century French poetry. The company which dubbed Groundhog Day into Un jour sans fin presumably wanted to spare national feeling in thinking of a totally pointless object of study. When Bayard talks about a Japanese novel, an English novel, an Italian one, what is he actually reading?

The virtue of Bayard’s book with its seemingly jocular premise is to suggest that notreading-but-talking is quite an important step on the long road towards the goal of actually reading the book. The weakness of it is that he doesn’t see that not-reading is, tragically, the only possible conclusion. Like Achilles and the tortoise, with every step the reader seems to halve the distance between himself and the book. Like the tortoise, a book always remains teasingly out of reach, and ultimately unreadable. You will never get to the end of Proust, though that isn’t a good reason not to make a start.

In last week’s issue the ISBN for A New Waste Land by Michael Horowitz was incorrect. The correct ISBN is 9780902689268.