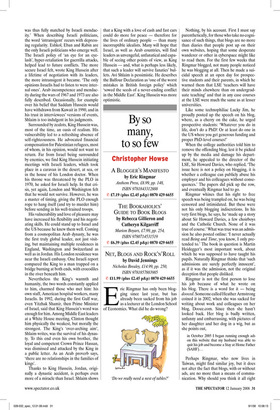 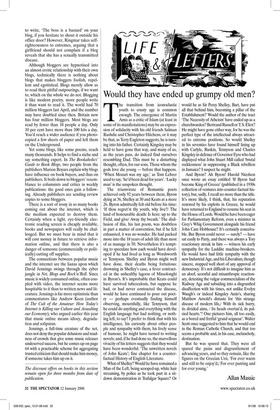 By so many, to so few

Like some technophiliac Lucky Jim, he proudly posted up the speech on his blog, where, as a cherry on the cake, he urged prospective students: ‘Whatever you do in life, don’t do a PhD! Or at least do one in the US where you get generous funding and proper PhD-level courses!’ When the college authorities told him to remove the offending blog, lest it be picked up by the media and damage his department, he appealed to the director of the LSE, Sir Howard Davies, who replied, ‘The issue here is not a policy on blogging, it is whether a colleague can publicly abuse his employer and his colleagues without consequences.’ The papers did pick up the row, and eventually Ringmar had to go.

Ringmar whines that his right to free speech was being trampled on, he was being censored and intimidated. But these were not his only blogging indiscretions. In his very first blogs, he says, he ‘made up a story about Sir Howard Davies, a few choirboys and the Catholic Church. None of it was true of course.’ What was true was an admission he also posted online: ‘I never actually read Being and Time, you know, I only pretended to.’ The book in question is Martin Heidegger’s most important work, about which he was supposed to have taught his pupils. Naturally Ringmar thinks that ‘such admissions are surely perfectly innocent’, as if it was the admission, not the original deception that people disliked.

Ringmar is not the first person to lose his job because of what he wrote on his blog. There is a word for it — being dooced. Someone called Heather Armstrong coined it in 2002, when she was sacked for writing about work and colleagues on her blog, Dooce.com. Since then she hasn’t looked back. Her blog is badly written, unfunny and embarrassing, with pictures of her daughter and her dog in a wig, but as she points out,

in October 2005 I began running enough ads on this website that my husband was able to quit his job and become a Stay at Home Father (SAHF).. .

Perhaps Ringmar, who now lives in Taiwan, might find similar joy, but it does not alter the fact that blogs, with or without ads, are no more than a means of communication. Why should you think it all right to write, ‘The boss is a bastard’ on your blog, if you hesitate to shout it outside his office door? However, Ringmar takes selfrighteousness to extremes, arguing that a girlfriend should not complain if a blog reveals that she has a sexually transmitted disease.

Although bloggers are hypnotised into an almost erotic relationship with their own blogs, technically there is nothing about blogs that makes bloggers foolish, repellent and egotistical. Blogs merely allow us to read their pitiful outpourings, if we want to, which on the whole we do not. Blogging is like modern poetry, more people write it than want to read it. The world had 70 million bloggers last April, and the number may have doubled since then. Britain now has four million bloggers. Most blogs are read by fewer than 10 people a day. Only 10 per cent have more than 100 hits a day. You’d reach a wider audience if you photocopied a few sheets of paper and left them on the Underground.

Yet some blogs, like some poems, reach many thousands. It helps to find a niche and say something expert. In The Bookaholics’ Guide to Book Blogs, two people from the publishers Marion Boyars explain why blogs have influence on book buyers, and thus on publishers. It boils down to bloggers’ resemblance to columnists and critics in weekly publications: the good ones gain a following. Already publishers are sending review copies to some bloggers.

There is a sort of irony in so many books coming out about the internet, which is the medium expected to destroy them. Certainly when a light, eye-friendly electronic reading screen is cheaply available, books and newspapers will really be challenged. But we must bear in mind that it will cost money in future to retrieve information online, and that there is also a danger of someone (commercially or politically) cutting off supplies.

The connections between popular music and the internet are the lianas upon which David Jennings swings through the cyber jungle in Net, Blogs and Rock’n’Roll. Since music is widely consumed online, often coupled with video, the internet seems more hospitable to it than to written news and literature. Jennings is far more optimistic than commentators like Andrew Keen (author of The Cult of the Amateur: How Today’s Internet is Killing our Culture and Assaulting our Economy), who argued earlier this year that music online means idiocy, degradation and solipsism.

Jennings, a full-time creature of the net, does not deny the popular delusions and madness of crowds that give some music releases undeserved success, but he comes up on page 64 with a practicable scheme for aggregating trusted criticism that should make him money, if someone takes him up on it.