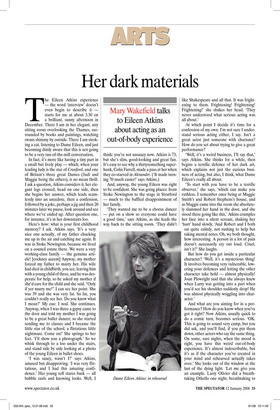 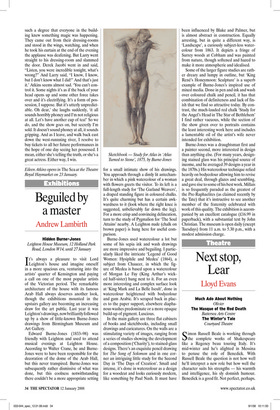 The Eileen Atkins experience — the word ‘interview’ doesn’t even begin to describe it — starts for me at about 3.30 on a brilliant, sunny afternoon in December. There I am in her elegant, airy sitting room overlooking the Thames, surrounded by books and paintings, watching swans shimmy by outside. There I am stroking a cat, listening to Dame Eileen, and just becoming dimly aware that this is not going to be a very run-of-the-mill conversation.

In fact, it’s more like having a tiny part in a small but lively play — which, when your leading lady is the star of Cranford, and one of Britain’s three great Dames (Judi and Maggie being the others), is no mean thrill.

I ask a question, Atkins considers it, her ele gant legs crossed, head on one side, then she begins her answer, which leads seam lessly into an anecdote, then a confession, followed by a joke, perhaps a jig and then 20 minutes later we pause, look around and see where we’ve ended up. After question one, for instance, it’s in her downstairs loo.

Here’s how: what is your first childhood memory? I ask. Atkins says, ‘It’s a very nice one actually, of my father chucking me up in the air and catching me again. It was in Stoke Newington, because we lived on a council estate there. We were a very working-class family — the genuine article! [cockney accent] Anyway, my mother forced my father to marry her. His wife had died in childbirth, you see, leaving him with a young child of three, and he was desperate for help, so he asked my mother if she’d care for the child and she said, “Only if yer marry me!” I can see her point. She was 39 and she was very fat. So fat, you couldn’t really see her. Do you know what I mean?’ My cue: I nod. She continues. ‘Anyway, when I was three a gypsy came to the door and told my mother I was going to be a great ballet dancer; so she started sending me to classes and I became the little star of the school, a flirtatious little nightmare. Come on!’ She springs to her feet. ‘I’ll show you a photograph.’ So we whisk through to a loo under the stairs, and stand side by side looking at a photo of the young Eileen in ballet shoes.

‘I was saucy, wasn’t I?’ says Atkins, amused but disapproving. ‘I was very flirtatious, and I had this amazing confidence.’ Her young self stares back — all bubble curls and knowing looks. Well, I think: you’re not unsaucy now. Atkins is 73, but she’s slim, good-looking and great fun. It’s easy to see why a thirtysomething superhunk, Colin Farrell, made a pass at her when they co-starred in Alexander. (‘It made turning 70 much easier!’ says Atkins.) And, anyway, the young Eileen was right to be confident. She was going places: from Stoke Newington to the stage in Stratford — much to the baffled disappointment of her family.

‘They wanted me to be a chorus dancer — put on a show so everyone could have a good time,’ says Atkins, as she leads the way back to the sitting room. ‘They didn’t like Shakespeare and all that. It was frightening to them. Frightening! Frightening! Frightening!’ she shakes her head. ‘They never understood what serious acting was all about.’ At which point I decide it’s time for a confession of my own. I’m not sure I understand serious acting either, I say. Isn’t a great actor just someone with charisma? How do you set about trying to give a great performance?

‘Well, it’s a weird business, I’ll say that,’ says Atkins. She thinks for a while, then begins a terrific defence of her dark art, which explains not just the curious business of acting, but also, I think, what Dame Eileen’s really all about.

‘To start with you have to be a terrific observer,’ she says, ‘which can make you ruthless. I remember once being at Maggie Smith’s and Robert Stephens’s house, and as Maggie came into the room she absolutely slammed her hand in the door, and she stood there going like this,’ Atkins crumples her face into a silent scream, shaking her ‘hurt’ hand slowly. ‘And Robert and I both sat quite calmly, not rushing to help but taking mental notes. Oh, we both thought, how interesting. A person in a lot of pain doesn’t necessarily cry out loud. Cruel, isn’t it?’ She laughs.

But how do you get inside a particular character? ‘Well, it’s a mysterious thing! It involves becoming very vulnerable, lowering your defences and letting the other character take hold — almost physically! Joan Plowright said that she always knew when Larry was getting into a part when you’d see his shoulder suddenly drop! He was almost physically wriggling into character.’ And what are you aiming for in a performance? How do you know when you’ve got it right? Now Atkins, usually quick to do a comic turn, becomes serious. ‘OK. This is going to sound very camp, but you did ask, and you’ll find, if you pin them down, other actors who say the same thing. On some, rare nights, when the mood is right, you have this weird out-of-body experience. It’s almost indescribable, but it’s as if the character you’ve created in your mind and rehearsed actually takes over.’ She looks out of the window at the last of the dying light. ‘Let me give you an example. Larry Olivier did a breathtaking Othello one night, breathtaking to such a degree that everyone in the building knew something magic was happening. They came out from their dressing-rooms and stood in the wings, watching, and when he took his curtain at the end of the evening the applause was deafening. But Larry went straight to his dressing-room and slammed the door. Derek Jacobi went in and said, “Listen, you were incredible tonight, what’s wrong?” And Larry said, “I know, I know, but I don’t know what I did!” And that’s just it.’ Atkins seems almost sad. ‘You can’t control it. Some nights it’s as if the back of your head opens up and some other force takes over and it’s electrifying. It’s a form of possession, I suppose. But it’s utterly unpredictable. Oh dear,’ she laughs suddenly, ‘it all sounds horribly phoney and I’m not religious at all. Let’s have another cup of tea!’ So we do, and the show goes on, but secretly I’m sold. It doesn’t sound phoney at all, it sounds gripping. And as I leave, and walk back east down the west-runnning river, I resolve to buy tickets to all her future performances in the hope of one day seeing her possessed. I mean, either she’s telling the truth, or she’s a great actress. Either way, I win.