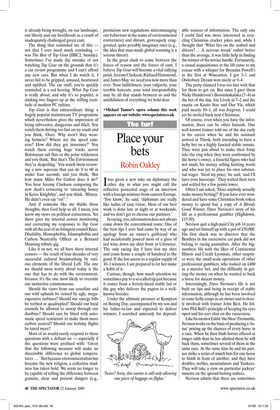 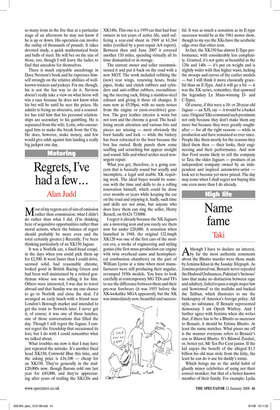 Iwas given a new take on diplomacy the other day in what you might call the reflective postcoital stage of an interview with a foreign minister from eastern Europe. ‘You know,’ he said, ‘diplomats are really like ladies of easy virtue. Most of our best work is done late at night or at weekends, and we don’t get to choose our partners.’ In racing, too, information does not always come down the conventional route. One of the best tips I ever had came by way of an apology from an owner’s girlfriend who had accidentally poured most of a glass of red wine down my shirt front at Uttoxeter. The only racing day I have lost my shirt and come home a couple of hundred to the good. If she has access to a regular supply of 10–1 winners, I am prepared to let her make a habit of it.

Curious, though, how much attention we sometimes pay to a so-called tip just because it comes from a ferrety-faced stable lad or the guy who delivers the papers to a wellknown breeder.

Under the ultimate pressure at Kempton on Boxing Day, accompanied by my son and his father-in-law and expected to deliver winners, I searched anxiously for depend able sources of information. The only one I could find was more interested in recycling Christmas cracker jokes and, while I thought that ‘What lies on the seabed and shivers? ... A nervous wreck’ rather better than the average, it was little help in finding the winner of the novice hurdle. Fortunately, a casual acquaintance in the lift came to my rescue with a whisper for Brendan Powell’s in the first at Wincanton. I got 3–1 and Owlesbury Dream won nicely at 9–4.

The party claimed I was too late with that for them to get on. But since I gave them Nicky Henderson’s Boomshakalaka (7–4) as the bet of the day, Joe Lively at 7–2 and the exacta on Kauto Star and Our Vic, which paid nearly 10–1, all was forgiven. I could yet be invited back next Christmas.

Of course, even when you have the information, there can be other hazards. One well-known trainer told me of the day early in his career when he and his assistant arrived at Thirsk, both intending to have a hefty bet on a highly fancied stable inmate. They were just about to make their foray into the ring when they were confronted by the horse’s owner, a forceful figure who had not made his money selling knitting wools and who was yet to place his own substantial wager. ‘Steal my price,’ he said, ‘and I’ll have your kneecaps.’ They waited their turn and settled for a few points lower.

Often I am asked, ‘Does anybody actually make money betting?’ If you have ever wondered and have some Christmas book-token money to spend buy a copy of A Bloody Good Winner, Dave Nevison’s story of his life as a professional gambler (Highdown, £15.99).

Nevison quit a high-paid City job 14 years ago and set himself up with a pot of £50,000. His first shock was to discover that the Bentleys in the racecourse car park did not belong to racing journalists. After the bignumbers life with the likes of Continental Illinois and Credit Lyonnais, other surprises were the small-scale operations of other professional gamblers, who looked on £400 as a massive bet, and the difficulty in getting the money on when he wanted to back a horse for decent money.

Interestingly, Dave Nevison’s life is not built on tips and being in receipt of stable information, although he has been involved in some hefty coups as an owner and is closely involved with trainer John Best. He follows Phil Bull’s principle of keeping his eyes open and his ears shut on the racecourse.

Like his mentor Eddie ‘the Shoe’ Fremantle, Nevison works on the basis of producing a ‘tissue’ pricing up the chances of every horse in a race. When he then finds horses offered at longer odds than he has allotted them he will back them, sometimes several of them in the same race. At the same time he and his partner strike a series of match bets for one horse to finish in front of another, and they have doubles, trebles, accumulators and Yankees. They will take a view on particular jockeys’ mounts on the spread-betting indices.

Nevison admits that there are sometimes so many irons in the fire that at a particular stage of an afternoon he may not know if he is up or down. His operation can involve the outlay of thousands of pounds. It takes devoted study, a quick mathematical brain and balls of steel. He will bet on the size of those, too, though I will leave the ladies to find that anecdote for themselves.

There is much enjoyable anecdotage in Dave Nevison’s book and he expresses himself strongly on the relative abilities of wellknown trainers and jockeys. For me, though, his is not the fun way to do it. Nevison doesn’t really take a view on what horse will win a race because he does not know what his bet will be until he sees the prices. He admits to being an obsessive, and a counsellor has told him that his personal relationships are secondary to his gambling. He is separated from the wife, Lotte, who encouraged him to make the break from the City. He does, however, make money, and few would give odds against him landing a really big jackpot one day.