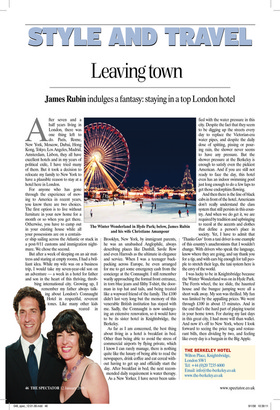 James Rubin indulges a fantasy: staying in a top London hotel After seven and a half years living in London, there was one thing left to do. Paris, Rome, New York, Moscow, Dubai, Hong Kong, Tokyo, Los Angeles, Madrid, Amsterdam, Lisbon, they all have excellent hotels and in my years of political exile, I have tried many of them. But it took a decision to relocate my family to New York to have a plausible reason to stay at a hotel here in London.

For anyone who has gone through the experience of moving to America in recent years, you know there are two choices. The first option is to live without furniture in your new home for a month or so when you get there. Otherwise, you have to camp out in your existing house while all your possessions are on a container ship sailing across the Atlantic or stuck in a post-9/11 customs and immigration nightmare. We chose the second.

But after a week of sleeping on an air mattress and staring at empty rooms, I had a brilliant idea. While my wife was on a business trip, I would take my seven-year-old son on an adventure — a week in a hotel for father and son in the heart of this thriving, throbbing international city. Growing up, I remember my father always talking about London’s Connaught Hotel in respectful, reverent tones. Like many other kids reared in Brooklyn, New York, by immigrant parents, he was an unabashed Anglophile, always describing places like Dunhill, Savile Row and even Harrods as the ultimate in elegance and service. When I was a teenager backpacking across Europe, he even arranged for me to get some emergency cash from the concierge at the Connaught. I still remember warily approaching the formal front entrance, in torn blue jeans and filthy T-shirt, the doorman in top hat and tails, and being treated like a wayward friend of the family. The £100 didn’t last very long but the memory of this venerable British institution has stayed with me. Sadly, the Connaught is now undergoing an extensive renovation, so it would have to be its sister hotel in Knightsbridge, the Berkeley.

As far as I am concerned, the best thing about living in a hotel is breakfast in bed. Other than being able to avoid the stress of commercial airports by flying private, which I know I can rarely manage, there is nothing quite like the luxury of being able to read the newspapers, drink coffee and eat cereal without having to get up and officially start the day. After breakfast in bed, the next recom mended daily requirement is water therapy.

As a New Yorker, I have never been satis fied with the water pressure in this city. Despite the fact that they seem to be digging up the streets every day to replace the Victorian-era water pipes, and despite the daily dose of spitting, pissing or pouring rain, the shower never seems to have any pressure. But the shower pressure at the Berkeley is enough to satisfy even the pickiest American. And if you are still not ready to face the day, this hotel even has an indoor swimming pool just long enough to do a few laps to get those endorphins flowing.

And then there is the line of black cabs in front of the hotel. Americans don’t really understand the class system that still persists in this country. And when we do get it, we are required by tradition and upbringing to recoil at the accents and clothes that define a person’s place in society. Yet, I have to admit that ‘Thanks Guv’ from a taxi driver is one example of this country’s anachronisms that I wouldn’t change. With drivers who speak the language, know where they are going, and say thank you for a tip, and with cars big enough for tall people to stretch their legs, the taxi system here is the envy of the world.

I was lucky to be in Knightsbridge because the Winter Wonderland was on in Hyde Park. The Ferris wheel, the ice slide, the haunted house and the bungee jumping were all a short walk away. My son was thrilled. My fun was limited by the appalling prices. We went through £100 in about 15 minutes. And in the end that’s the hard part of playing tourist in your home town. For during my last days in this great city, I had more will than wallet. And now it’s off to New York, where I look forward to seeing the price tags and restaurant bills, then dividing by two, and feeling like every day is a bargain in the Big Apple.