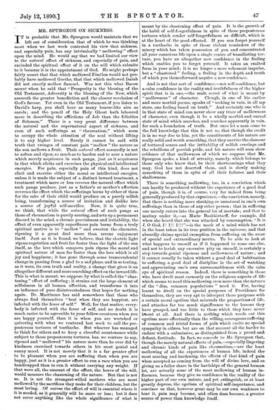 TTis probable that Mr. Spurgeon would maintain that we left out of consideration that of which he was thinking most when we last week contested his view that sickness, and especially pain, has any intrinsically " mellowing " effect upon the mind. He would say that we had limited our view to the natural effect of sickness, and especially of pain, and excluded the spiritual effect of it on the will which submits to it because it is the appointment of God. He might perhaps fairly assert that that which mellowed Fenelon would not pro- bably have mellowed Goethe, that that which mellowed Isaiah did not exactly mellow Samuel. Was not this what Bacon meant when he said that "Prosperity is the blessing of the Old Testament, Adversity is the blessing of the New, which assureth the greater benediction and the clearer revelation of God's favour. Yet even in the Old Testament, if you listen to -David's harp, you shall hear as many hearse-like airs as carols ; and the pencil of the Holy Ghost hath laboured more in describing the afflictions of Job than the felicities of Solomon." There is a very great difference between -the natural and the supernatural aspect of sickness, and even of such sufferings as "rheumatism," which seem to occupy the whole attention of the soul without lifting -it to any higher level. Surely it cannot be said with truth that twinges of constant pain " mellow " the nature as the sun mellows a fruit. Their natural effect assuredly is not to soften and ripen, so much as to harden and to sour a nature • which merely acquiesces in such pangs, just as it acquiesces in that which elicits and exercises the physical and intellectual energies. For pain, especially pain of this kind, does not elicit and exercise either the moral or intellectual energies, unless it is made the subject of a distinct inward treatment, a treatment which more or less reverses the natural effect which such pangs produce, just as a father's or mother's affection reverses the effect which the sufferings borne by either of them for the sake of their child would produce on a purely selfish being, transforming a source of irritation and dislike into a source of joyful self-sacrifice. Now, it is quite true, we think, that while the natural effect of such pangs as those of rheumatism is purely souring, and sets up a permanent discord in the mind, a chronic peevishness and irritability, the effect of even apparently superfluous pain borne from a truly spiritual motive is to " mellow " and sweeten the character, ripening it a great deal more than serene enjoyment itself. Just as it is found, we believe, that the electric light ripens vegetation and fruit far faster than the light of the sun itself, so the love which conquers pain ripens the moral and spiritual nature of man far faster than the love which is all joy and happiness ; it has gone through some transcendental change in passing from a glad to a sad phase, and in so testing, as it were, its own truth and reality, a change that gives it an altogether different and more searching effect on the inward life. This is what is meant, we suppose, by what is called the " chas- tening" effect of suffering ; it strains out the large element of selfishness in all human affection, and transforms it into an influence of pure disinterestedness that hopes for nothing again. Dr. Martineau has said somewhere that those who always find themselves "best when they are happiest, are infected with the fever of self." Well, for that matter, every- body is infected with the fever of self, and no doubt it is much easier to be agreeable to your fellow-creatures when you are happy yourself, than it is when you are wretched or quivering with what we ventured last week to call the pre- posterous tortures of toothache. But whoever has managed to think for others and to keep a cheerful countenance while subject to those preposterous tortures, has, we venture to say, ripened and " mellowed " his nature more than he ever did by kindness exercised towards others in his most genial and • sunny mood. It is not merely that it is a far greater effort to be pleasant when you are suffering than when you are happy, just as it is a greater effort to ran a race when you are handicapped than to run it without carrying any weight. If that were all, the amount of the effort, the heave of the will, would measure the chastening of the nature. But that is not so. It is not the strongest-willed mothers who are most mellowed by the sacrifices they make for their children, but the most loving. Of course the effort of will is essential where it it is needed, as it generally will be more or less; but it does not cover anything like the whole significance of what is

meant by the chastening effect of pain. It is the growth of the habit of self-forgetfulness in spite of those preposterous. tortures which render self-forgetfulness so difficult, which is at the heart of the good effected. If you can forget yourself in a toothache in spite of those violent reminders of the misery which has taken possession of you and concentrated all your conscious life upon a single centre of humiliating tor- ture, you have an altogether new confidence in the feeling which enables you to forget yourself. It takes an exalted form in your mind ; it is no longer a mere vehement impulse,. but a " chastened " feeling, a feeling in the depth and truth of which you thenceforward acquire a new confidence.

And is not that sort of confidence,—not self-confidence, but a calm confidence in the reality and truthfulness of the higher spirit that is in one,—the main secret of what is meant by " mellowness " of character. Clough, in one of his earlier- and more morbid poems, speaks of "seeking in vain, in all my store, one feeling based on truth." And certainly one who in in that state of mind can never show any trace of mellowness of character, even though it be a wholly morbid and unreal state of mind which searches, and searches apparently in vain, for such a foundation of truth. But once let a man come to, the full knowledge that this is not so, that though the credit is in no way due to him, yet the constituents of his nature are really solid and worth something, that they survive the clamour of tortured senses and the irritability of selfish cravings and the rebellions of peevish pride, and his nature will soon show- evidence of that mellowness of which we suppose that Mr. Spurgeonspoke, a kind of serenity, namely, which belongs to those only who know that, be their shortcomings what they may, God has not deserted them, and is slowly making something of them in spite of all their failures and their shallowness.

There is something mellowing, too, in a conviction which can hardly be produced without the experience of a good deal of pain, though it is, of course, very far indeed from being generally produced by that experience,—the conviction, namely, that there is nothing more shocking or unnatural in one's own sufferings than in those of any other person; that in suffering one merely enters into the general lot of mortals; and that to- mutiny under it,—as Marie Bashkirtseff, for example, did when she heard that she was attacked by consumption, "It is. I, 0 God, I! I!! I!!!"—is the mark of a mind which has not in the least taken in its true position in the universe, and that absurdly claims special exemption from suffering on the score- of special and extraordinary merits. To be able to look at what happens to oneself as if it happened to some one else, and not to lavish any excessive pity on oneself, is certainly a step towards genial ripeness and mellowness of nature ; and it cannot usually be taken without a good deal of habituation to suffering, a good deal of discipline in the art of watching and appreciating one's own unreasonableness with the calm eye of spiritual reason. Indeed, there is something in those- who have dwelt most earnestly on the religious aspects of life which seems to need this mellowing even more than the natures. of the "dim, common populations" need it. For, having- learnt to dwell on the special purposes of Providence for themselves, they are very apt to interpret these purposes with a certain moral egotism that misreads the proportion& of life, and attaches far too much significance to the lessons they have grasped, and too little to those which they have never leanat at all. And there is nothing which weeds out this. egotism more effectually than the willing, courageous suffering- of common and trivial forms of pain which excite no special, sympathy in others. but are on that account all the harder to endure with a submissive, as distinguished from a proud and defiant, fortitude. In fact, we concede to Mr. Spurgeon that,. though the merely natural effects of pain,—especially lingering- and chronic kinds of pain like rheumatism,—are the least mellowing of all the experiences of human life, indeed the most souring and hardening, the effects of that kind of pain when accepted as coming from the will of divine love, and as- giving us a fuller share in the hardships of the general humam lot, are actually some of the most mellowing of human in- fluences, because they give us confidence in the reality of the- higher part of our own nature, and yet extinguish, or at least greatly depress, the egotism of spiritual self-importance, and convince us that, however great may be our own weakness to bear it, pain may become, and often does become, a greater source of power than knowledge itself.