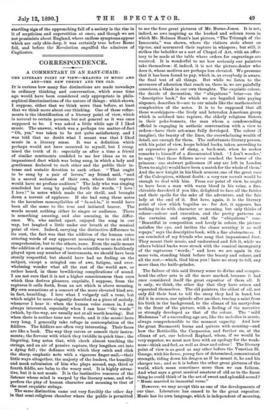 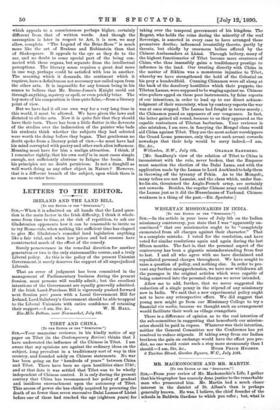 A COMMENTARY IN AN EASY-CHAIR:

?HE LITERARY POINT OF VIEW-MEANING IN MUSIC AND ART-THE NEW THEORY AND THE OLD.

IT is curious how many fine distinctions are made nowadays in ordinary thinking and conversation, which some time ago would have been considered only appropriate in philo- sophical discriminations of the nature of things : which shows, I suppose, either that we think more than before, at least that we think more about our thinking. One of these refine- ments is the identification of a literary point of view, which is natural to certain persons, but not general as it was once

supposed to be. I was asked a little while ago if I liked music. The answer, which was a perhaps too matter-of-fact "Oh, yes," was taken to be not quite satisfactory, and I was told that no doubt what I meant was that I liked music in a literary sense. It was a definition which perhaps would not have occurred to myself, but I recog- nised the truth of it: especially as after a time a friend of similar sentiments confided to me her ideas as to an impassioned duet which was being sung, in which a lady and gentleman declared to each other and the public their in- tense and ecstatic devotion to each other. "That ought to be sung by a pair of lovers," my friend said, "and in a sacred seclusion of their own, where their rapture would have no profane auditors." The lady who was singing concluded her song by pealing forth the words, "I love ! I love !" in notes which made the air thrill, and brought down a torrent of applause. If she had sung these notes to the harmless monosyllables of " fa-sol-la," it would have been all the same to the true and initiated hearer. The words meant nothing either to singer or audience. There is something amazing, and also amusing, in the differ- ence. We, who smiled apart, enjoyed the song in our way, but laughed a little under our breath at the musical point of view. Indeed, carrying the distinctive difference to its root, the fact was that the addition of the human voice uttering words of any apparent meaning was to us an aid to -comprehension, but to the others, none. Even the smile meant the addition of a meaning : towards scientific music faultlessly played upon any number of instruments, we should have been stonily respectful, but should have had no feeling on the -subject, except a mingled one of awe, fatigue, and over- whelming wonder what all the rest of the world saw, or rather heard, in those bewildering complications of sound. I am not sure that it is not a higher consciousness than ours which thus derives pleasure, exquisite, I suppose, from the -raptures it calls forth, from an art which is above meaning. My own sensations at a concert of the more elevated kind are, in fact, humbling. I love what I vulgarly call a tune, but which might be more elegantly described as a piece of melody, whenever I hear it : when the human voice comes in, I am always interested, especially when I can hear "the words" (which, by-the-way, are usually not at all worth hearing). But when there is neither tune nor words, and it (the music) lasts very long, I generally take refuge in contemplation of the fiddlers. The fiddlers are often very interesting. Their faces are like a book. The way they caress or assault their instru- ments; the fervour with which they twiddle in quick time ; the lingering, long notes that, with cheek almost touching the strings, and an air of pensive rapture, they lengthen out into a dying fall ; the defiance with which they catch and click the sharp, emphatic Rote with a vigorous finger-nail,—their little ways altogether, the majesty of the leaders, the humility and meek submission of him who plays second, nay, third or fourth fiddle, are balm to the weary soul. It is highly attrac- tive, but it is not music. It is the instinctive resource of the listener whose mind is warped by the literary sense, and who prefers the play of human character and meaning to that of the most exquisite strings.

to see the four great pictures of Mr. Burne-Jones. It is not, indeed, so awe-inspiring as the bushed and solemn room in which Mr. Holman Hunt's last picture, "The Triumph of the Innocents," was shown, where the visitors stole about on tip-toe, and murmured their rapture in whispers; but still, it strikes the beholder as a sort of Chapel of Art, with an offer- tory to be made at the table where orders for engravings are received. It is wonderful to me how seriously our painters take themselves : if, indeed, it is not the picture-dealer who does it, whose motives are perhaps less elevated. We presume that it has been found to pay, which is, as everybody is aware, the final test of all things. But while we listen to the murmurs of adoration that reach us, there is, we are painfully conscious, a blank in our own thoughts. The exquisite colour, the dazzle of decoration, the " ubiquitous " briar—as the "descriptive book," for which we are beguiled into paying sixpence, describes it—are to our minds like the mathematical complexities of the notes. It is to be supposed that all these worshippers—the lively and heterodox American group which is subdued into rapture, the elderly religious Sisters in their poke-bonnets, the man whom a condescending official is engaging in Eesthetic conversation with a view to orders—have their art-sense fully developed. The colour (I imagine), the beauty of the lines, the overwhelming wealth of detail, are enough for them. The unfortunate literary person, with his point of view, keeps behind backs, takes, according to an expressive piece of slang, a back-seat, when he makes remarks to himself of a discontented kind. I don't wonder,' he says, 'that those fellows never reached the bower of the princess : one stalwart policeman (if any are left in London Town to-night) would have been a match for the whole of them.' And the new knight in his black armour, one of the great race of the Coleoptera., without doubt : a very raw recruit would be enough to deal with him. From our point of view, he ought to have been a man with warm blood in his veins, a fine, chivalric daredevil if you like, delighted to face all the fairies and their spells for the sake of the adventure, and the fair lady at the end of it. But here, again, it is the literary point of view which beguiles us : for Art, it appears, has nothing to do with character or meaning, but only thinks of colour—colour and execution, and the pretty patterns on the curtains and carpets, and the " ubiquitous " rose. "Beautiful in composition and lovely in colour, the picture satisfies the eye, and invites the closer scrutiny it so well repays," says the descriptive book, with a fine abstractness. I am reminded of my friends who sang that impassioned duet. They meant their music, and understood and felt it, while we others behind backs were struck with the comical incongruity of the rapturous " words ; " and here we are again in the same vein, standing blank before the beauty and colour, and all the rest,—which, God bless you! have no story to tell, any more than the knife-grinder.

The failure of this said literary sense to divine and compre- hend the other arts is all the more marked, because it had once considered itself the great expositor of them all. It is only, we think, the other day that they have arisen and separated themselves. The old painters, the oldest of all, not only did their beet to tell the story they had in hand, but did it in scenes, one episode after another, tracing a saint from his birth in the background, to the climax of his martyrdom in the front of the picture, with a feeling of the narrative as strongly developed as that of the colour. The "mild Madonnas "of a succeeding age are, like the melodies in music, always comprehensible to the meanest capacity. And how the great Buonarotti burns and quivers with meaning—and how the Botticellis, the Carpaccios, and further on, at the climax of art, our beloved Raphael, whom, if we would be very superior, we must now love with an apology for the weak- ness—think and feel, as well as draw and colour ! The literary point of view is as good as any other before the Venetian St. George, with his fierce, young face of determined, concentrated strength, riding down his dragon as if he meant it, he and his charger too; and so it is before the other great pictures of the world, which mean sometimes more than we can fathom. And what says a great musical amateur of old as to the finest thing he could think of in the art of sweet and splendid sound ? "Music married to immortal verse."

However, we may accept this as one of the developments of our time. Literature has ceased to be the great expositor. Music has its own language, which is independent of meaning, which appeals to a consciousness perhaps higher, certainly different from that of written words. And though the assumption is later in respect to Art, it is now, we may allow, complete. "The Legend of the Briar-Rose" is much more like the art of Brahms and Rubinstein than that of Shakespeare. It appeals to the eye as they do to the ear, and no doubt to some special part of the being con- nected with these organs, but separate from the intellectual perceptions. The literary sense requires a great deal more in -one way, perhaps could be satisfied with less in another. The meaning which it demands, the sentiment which it requires, have a definiteness not necessary nor called upon from the other arts. It is impossible for any human being in his senses to believe that Mr. Burne-Jones's Knight could cut through anything, mystery or spell, or even prickly briar. The key-note of his composition is thus quite false,—from a literary point of view.

But we have had it all our own way for a very long time in this world, it must be allowed. We have given the laws and dictated to all the arts. Now it is quite fair that they should have their turn. There has been a little flutter in the dovecots of the studios over the indiscretion of the painter who bade his students think whether the subjects they had selected were worth the doing before they began. That gentleman no doubt spoke from a literary point of view,—he must have had his mind corrupted with poetry and other such alien influences. Meaning must have for him a malign attraction. I think, if I remember rightly, that his own motif is in most cases simple enough, not sufficiently abstruse to fatigue the brain. But his principles are no doubt pernicious. Is not a dunghill as well worth doing as any other object in Nature ? However, that is a different branch of the subject, upon which there is no room to enter here.