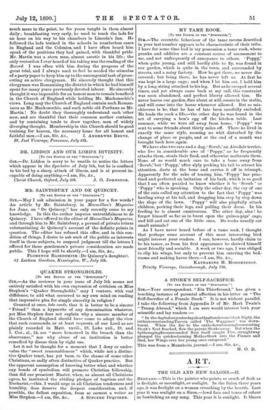 [To TEE EDITOR OP THE " SPECTATOR:1 SIB,—The eccentric behaviour of the tame ravens described in your last number appears to be characteristic of their tribe. I have for some time had in my possession a tame rook, whose pranks and oddities are a constant source of amusement to me, and not unfrequently of annoyance to others. Poppy,' when quite young, and still hardly able to fly, was found in our garden, which is quite in the town, and surrounded by streets, and a noisy factory. How he got there, we never dis- covered; but being there, he has never left us. At first he was kept in a large cage ; and when I let him out, I held him by a long string attached to his leg. But as he escaped several times, and yet always came back at my call, this constraint was soon abandoned, and perfect liberty allowed him. He never leaves our garden, flies about at will, roosts in the stable, and will come into the house whenever allowed. But so mis- chievous is he, that he has of late been carefully excluded. He leads the cook a life,—the other day he was found in the act of carrying a hen's egg off the kitchen table. Last summer, while we were all away from home, 'Poppy' was sent to some friends about thirty miles off. There he lived in exactly the same style, seeming no whit disturbed by the change of place or people, and at the end of a month was brought back here again.

We have also two cats and a dog, Scrub,' an Airedale terrier, who live in .considerable awe of Poppy,' as he frequently attacks them, steals their food, and otherwise maltreats them. None of us would much care to take a bone away from Scrub,' but Poppy,' after slyly pecking his tail to attract his attention, darts at the bone and carries it off in triumph. Apparently for the sake of teasing him, ' Poppy ' has prac- tised and perfected an imitation of his bark, which is so good that I am often puzzled to know whether it be 'Scrub' or 'Poppy' who is speaking. Only the other day, the cry of one of the cats called my attention to the fact that 'Poppy' was hauling away at his tail, and dragging him step by step down the slope of the lawn. 'Poppy' will also playfully attack children, pecking their legs, and pulling their dress. In his feeding he is almost omnivorous. The other day, alas ! he forgot himself so far as to burst open the guinea-pigs' cage, and kill and eat one of the little ones. Do rooks usually eat small animals As I have never heard before of a tame rook, I thought that perhaps some account of this most interesting bird might interest your readers. I can, however, hardly claim to be his tamer, as from his first appearance he showed himself most friendly and sociable. A week or two ago, I was obliged to clip his wings, but only to prevent him entering the bed- rooms and making havoc there.—I am, Sir, &c., KATHARINE H. HODGKINSON.