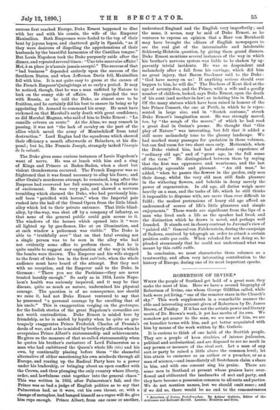 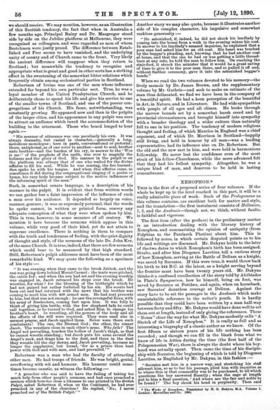 WHEN the people of Scotland get hold of a great man, they make the most of him. Here we have a second biography of Robertson of Irvine, one whom George Gilfillan called, while both were yet living, " one of the remoter stars in the Church's sky." This work supplements in a remarkable manner the able and interesting account given of Robertson by Dr. James Brown, of Paisley. If it has not the artistic power and literary merit of Dr. Brown's work, it yet has merits of its own. We somehow get nearer to the man, we see more of him, we are on homelier terms with him, and get better acquainted with him by means of the work written by Mr. Guthrie.

It is curious to think of one habit of the Scottish people. They are a people of keen rivalries, of intense jealousies, political and ecclesiastical, and are disposed to see no merit in any person or measure of the rival sect. Let a man of any sect or party be raised a little above the common level ; let him attain to eminence as an author or a preacher, or as a. man of science,—and immediately all Scotchmen claim a share in him, and with one consent sing his praise. There are some men in Scotland at present whose praises have over- flowed and obliterated the landmarks of sect and party, and they have become a possession common to all sects and parties. We do not mention names, lest we should omit some ; and if we did so, there would be no end to the remonstrances

• Robertson of Irvine, Poet-Preacher. By Arthur Guthrie, Editor of the drdrossan and &Moats Herald. London: Hearten and Bons,

we should receive. We may mention, however, as an illustration of this Scottish tendency, the feet that when in Australia a iew months ago, Principal Rainy and Dr. Macgregor stood side by side on the Jubilee platform at Melbourne, they were recognised as colleagues, and were regarded as men of whom Scotchmen were justly proud. The difference between Estab- lished and Free seems to have vanished, and the underlying unity of county and of Church came to the front. Very likely the ancient difference will reappear when they return to Scotland ; but meanwhile the tendency to recognise and appropriate what is great and good in other sects has a striking effect in the sweetening of the somewhat bitter relations which frequently obtain among ecclesiastical parties in Scotland.

Robertson of Irvine was one of the men whose influence extended far beyond his own particular sect. True, he was a loyal member of the United Presbyterian Church, and he deliberately ohose to spend his life and give his service to one of the smaller towns of Scotland, and one of the poorer con- gregations of his Church. His fame, notwithstanding, was constantly growing. He appeared now and then in the pulpits of the larger cities, and his appearance in any pulpit was sure to attract an audience which taxed the accommodation of the building to the uttermost. Those who heard longed to hear again :—

"His manner of utterance was one peculiarly his own. It was always dramatic, but varied in character,—generally a long, melodious monologue ; here in parts, conversational or pictorial ; there, antiphonal, as of one voice to another—soul to soul, brother unto brother—and the burden of his cry, in answer to the Woe is me !' of the prophets of the earth, was ever to magnify the holiness and the glory of God. His manner in the pulpit or on the platform was always that of one who waited for the divine afflatus to fill his soul. While he was musing, the fire burned ; then spake he with his tongue. And when this afflatus came, as sometimes it did during the congregational singing of a psalm or hymn, his very body became subject to the motive influences of the informing spirit of the man."

Such, in somewhat ornate language, is a description of his manner in the pulpit. It is evident that from written words we can gather but a faint impression of the influence of such a man over his audience. It depended so largely on voice, manner, gesture ; it was so supremely personal, that the words he spoke cannot, in written or printed form, convey any adequate conception of what they were when spoken by him. 'This is true, however, in some measure of all oratory. We mention it here because the sermons which appear in this volume, while very good of their kind, yet do not attain to supreme excellence. There is nothing in them to compare with the truth and tenderness of feeling, with the quiet dignity of thought and style, of the sermons of the late Dr. John Ker, of the same Church. It is true, indeed, that there are few sermons which could bear to be measured by that high standard. Still, Robertson's pulpit addresses must have been of the most remarkable kind. We may quote the following as a specimen of his style :— "It was evening when they came to the brook Jabbok, and the sun was going down behind Mount Carmel : the tents were pitched, the cattle fed : and when the sun had set and the evening worship was engaged in, Jacob retraced his steps over the brook. He wrestles, for what ? for the blessing of the birthright which he had not gained but rather forfeited by his sin. His scouts had been out and had returned with the news that his brother was coming to meet him with 400 armed men. He had sent presents to him, but that was not enough : he saw the revengeful Esau, with his army of freebooters, coming fast upon him. It was folly to think of giving him battle, with the few shepherd lads he could call together, so he turned to God, and asked Him to change his brother's heart. In wrestling, all the powers of the body and all the efforts of the will were required. They were used also in earnest prayer, and Jacob applied them. Never were there such combatants ! The one, the Eternal God ; the other, the sinner Jacob. The wrestlers close in each other's arms. Who falls? The Angel not prevailing, touches the hollow of Jacob's thigh, so that he cannot wrestle standing ; but Jacob puts his arms around the Angel's neck, and drags him to the dust, and there in the dust they wrestle till the day dawns, and, Jacob prevailing, becomes no longer the supplanter, but Israel, for as a prince thou haat power with God and with men, and haat prevailed.' " Robertson was a man who had the faculty of attracting other men. He had troops of friends. He was bright, genial, overflowing with wit and humour. His humour could some- times become caustic, as witness the following :— " A preacher who was said to have the failing of taking too much help from other people's sermons, and had once preached a sermon which bore too close a likeness to one printed in the British Pulpit, asked Robertson if, when on the Continent, he had ever preached in any of the churches? He replied, 'No; I never preached out of the British Pulpit.' "

Another story we may also quote, because it illustrates another side of his complex character, his impulsive and somewhat reckless generosity :—

" He astonished, if, indeed, he did not shock his landlady by coming into the house from a walk in the evening minus his coat. In answer to his landlady's amazed inquiries, he explained that a poor man had asked him for an old coat. His heart was touched by the beggar's pleading, and, knowing that he had another coat at home, and that the one he had on was getting a little thread- bare at any rate, he told the man to follow him. On reaching the stair-foot, it struck the minister that it would be a great saving of time to give it to the poor man there, and so pulled it off and, without further ceremony, gave it into the astonished beggar's hands."

When we read the two volumes devoted to his memory—the lively memoir by Dr. James Brown, and the supplementary volume by Mr. Guthrie—and seek to make an estimate of the man thus delineated, we find we have been in the company of a beautiful spirit. He had a keen perception of the beautiful in Art, in Nature, and in Literature. He had wide sympathies with people of all ages and all climes. He broke through the narrow bounds set by a somewhat harsh creed and by provincial circumstances, and brought himself into sympathy with a broader theology and a wider culture than naturally fell to one in his position. The tendency of modern religious thought and feeling, of which Maurice in England was a chief exponent, and of which Dr. Morrison in Scotland—happily still living, and held in honour by all men—was a leading representative, had its influence also on Dr. Robertson. But the old and the new met in him, and were held in harmonious fellowship. He never lost the confidence even of the most strait of his fellow-Churchmen, while the more advanced felt that they had his fullest sympathy. Altogether, he was a unique kind of man, and deserves to be held in lasting remembrance.