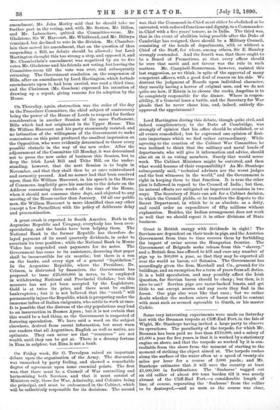 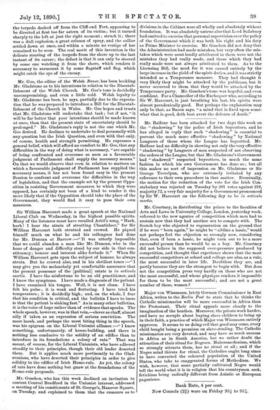 Page 2, 12 July 1890 — Some very interesting experiments were made on Saturday last with
Close

Some very interesting experiments were made on Saturday last with

the Brennan torpedo at Cliff-End Fort, in the Isle of Wight, Mr. Stanhope having invited a large party to observe its operations. The peculiarity of the torpedo, for which Mr. Brennan has been paid no less than 2110,000, and a salary of £1,000 a year for five years, is that it is worked by a stationary engine on shore, and that the torpedo so worked by it is con- trollable from the shore from the moment of starting to the moment of striking the object aimed at. The torpedo rushes along the surface of the water often at a speed of twenty-six miles per hour for a course of 3,000 yards ; and Mr. Stanhope estimates that it will save the country at least £1,000,000 in fortifications. The Seahorse ' tugged out an old collier of about 400 tons burden till it was nearly abreast of the Cliff-End Fort,—a considerable length of line, of course, separating the Seahorse ' from the collier to be destroyed,—and as soon as the course was clear,

the torpedo dashed off from the Cliff-end Fort, appearing to be directed at first too far astern of its victim; but it turned sharply to the left at just the right moment; struck it ; there was a dull explosion, a great column of spray, and the collier settled down at once, and within a minute no vestige of her remained to be seen. The real merit of this invention is the delicate steering of the torpedo from the shore up to the last instant of its career; the defect is that it can only be steered by some one watching it from the shore, which renders it necessary to *surmount it by some flagstaff and flag, which might catch the eye of the enemy.