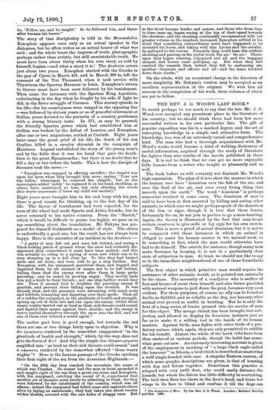 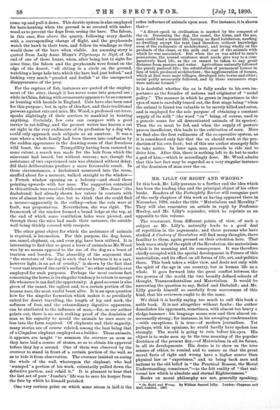 IT would perhaps be too much to say that the late Mr. J. G. Wood ever occupied any prominent place in the literature of his country; but we should think there had been few more successful writers in his own particular line. The gift of popular exposition was his to a marked degree, and the art of conveying knowledge in a simple and attractive form. The knowledge, too, was of an extremely varied and comprehensive kind. The man who had a thorough acquaintance with Mr. Wood's works would become a kind of walking dictionary of useful information, acquired through the study of literature far lighter than nine-tenths of the novels published in these days. It is sad to think that we can get no more enjoyable little lessons from a writer who taught so pleasantly and so well.

The book before us will certainly not diminish Mr. Wood's high reputation. The plan of it is to show the manner in which the human race have "dominion over the fish of the sea, and over the fowl of the air, and over every living thing that moveth upon the earth." The word "dominion" is perhaps somewhat strained in some cases. The dominion of man is said to have been at first asserted by killing and eating other animals, in which case we might perhaps speak of the dominion of the lion or tiger, though it is true that these beasts, fortunately for us, do not join in parties to go a-man-hunting. Again, the theory is illustrated by the fact that man keeps certain creatures to give milk or lay eggs for his own susten- ance. This is more a proof of actual dominion, but it is not to be compared with those instances in which an animal is obliged to assist his human master in his natural work, to do something, in fact, which the man would otherwise have had to do himself. The ostrich, for instance, though many men make fortunes by keeping it, is not in a particularly clear state of subjection to man. At least, we should not like to say so in the immediate neighbourhood of one of those formidable subjects.

The first object in which primitive man would require the assistance of other animals, would, as is pointed out, naturally be the chase. The necessity of a coadjutor who is swifter of foot and keener of scent than himself, and also better provided with natural weapons to pull down the prey, becomes very soon evident. For these purposes, of course, no ally can be found so docile, so faithful, and so reliable as the dog, nor has any other animal ever proved so useful in hunting. But he is only the first of a long series of beasts pressed into the service of man for this object. The savage chetah has been brought into sub- jection, and allowed to display its ferocious instincts just so far as to make it a willing tool in the hands of its human masters. Against birds, man fights with other birds of a pre- datory nature, which, again, they are only permitted to exhibit for his benefit. Almost the whole of the hawk tribe have been thus enslaved at various periods, though the habit has some- what gone outflow. An extremely interesting account is given of the employment in hawking of "a large black eagle called the bearc.00t " in Siberia, a bird which is described as mastering a wolf single-handed with ease. A singular Eastern custom, of which some graphic descriptions are given, is that of hunting with dog and falcon together. Sometimes this practice is adopted with very swift deer, who could easily distance the hounds, but whom the falcon has little difficulty in overtaking. The bird then fixes her claws in the deer's head, and beats her wings in its face to blind and confuse it till the dogs can

• The Dominion of Man. By the Rev. J. G. Wood. London Richard Bentley and Son. 1889. come up and pull it down. This double system is also employed for hare-hunting when the ground is so covered with under- wood as to prevent the dogs from seeing the hare. The falcon, in this case, flies above the quarry, following every double with a corresponding change of flight, and the greyhounds watch the hawk in their turn, and follow its windings as they would those of the hare when visible. An amusing story is quoted from Lady Anne Blunt's- Pilgrimage to Nejd, of the end of one of these hunts, when, after being lost to sight for some time, the falcon and the greyhounds were found on the edge of the desert, "all sitting in a circle on the ground, watching a large hole into which the hare had just bolted," and looking very much "puzzled and foolish" at the unexpected disappearance of the prey.

For the capture of fish, instances are quoted of the employ- ment of the otter, though it has never come into general use ; while in China, fishing with cormorants appears to be as common as hunting with hounds in England. Cats have also been used for this purpose ; but in spite of this fact, and their traditional prowess against rats and mice, Mr. Wood, a professed cat-lover, speaks slightingly of their services to mankind in hunting anything. Certainly, few cats can compare with a good terrier in rat-killing, and the present writer has known a cat set right in the very rudiments of its profession by a dog who could only approach such subjects as an amateur. It was a case where a whole family had been thrown into confusion by the sudden appearance in the drawing-room of that ferocious wild beast, the mouse. Tranquillity having been restored to some extent, a search was made for the hole from which the miscreant had issued, but without success ; nor, though the assistance of two experienced cats was obtained without delay, did their deliberations produce a more favourable result. In these circumstances, a dachshund sauntered into the room, snuffed about for a moment, walked straight to the window— a French window opening on a balcony—and stood there pointing upwards with her nose. The suggestion contained in this attitude was received with contumely. 'Mrs. Jones' (the dachshund) had already shown her valour in contests with rats of almost her own size, but to think that she could find a mouse—apparently in the ceiling—when the cats were at fault, was preposterous. Nevertheless, she was right. The framework of the window formed a broad ledge at the top, at the end of which some ventilation holes were pierced, and through these the mice had made their entrance, the outside wall being thickly covered with creepers.

The other great object for which the assistance of animals is required, is locomotion. For this purpose, the dog, horse, ass, camel, elephant, ox, and even pig, have been utilised. It is interesting to find that so great a lover of animals as Mr.Wood was by no means opposed to the use of the dog as a beast of traction and burden. The absurdity of the argument that "the structure of the dog is such that to harness it to a cart, however light, is an act of cruelty," is shown by the fact that "over vast tracts of the earth's surface " no other animal is ever employed for such purposes. Perhaps the most curious fact concerning the horse, is its singular tendency to return to savage life whenever it can find the opportunity. A good account is also given of the camel, the ugliest and, to a certain portion of the human race, the most useful beast alive. It is an open question how far the singular formation which makes it so peculiarly suited for desert travelling, the length of leg and neck, the softness of foot, and the extraordinary digestive apparatus, can be attributed to the influence of man,—for, as our author points out, there is no such striking proof of the dominion of man as his capacity to mould the animals he uses more or less into the form required. Of elephants and their sagacity, many stories are of course related, among the best being that of a Cingalese elephant employed as a builder. These animals, it appears, are taught "to summon the overseer as soon as they have laid a course of stones, so as to obtain his approval before they lay a second. One of them was observed by the overseer to stand in front of a certain portion of the wall, so as to hide it from observation. The overseer insisted on seeing the whole of the wall, whereupon the elephant, who had stamped' a portion of his work, voluntarily pulled down the defective portion, and rebid it." It is pleasant to hear that the last act of poor 'Jumbo's' life was to save his keeper from the fate by which he himself perished.

reflex influence of animals upon man. For instance, it is shown that—

"A. direct epoch in civilisation is marked by the conquest of the ox. Possessing the dog, the camel, the horse, and the ass, man could lead a nomad life, having no fixed habitation, needing no dwelling except the tent (and therefore without knowledge even of the rudiments of architecture), and living wholly on the products of the chase, or the milk and coat of the animals with which he was associated. But when the ox was added to man's possessions, the nomad existence must needs give way to a com- paratively fixed life, as the ox cannot be taken to any great distance from pasture and water. Agriculture naturally followed the purely pastoral life ; the substitution of permanent houses in lieu of tents produced architecture ; the agglomeration of houses, which at first were mere villages, developed into towns and cities ; social polity necessarily followed, and by these successive steps were nations formed."

polity." The manner in which he grows in importance in the eyes of man is carefully traced out, the first stage being "when the animal is found too valuable to be merely killed and eaten, and is employed for the sole purpose of obtaining a constant. supply of its milk" (the word "ox" being, of course, used in a generic sense for all domesticated animals of its species). Then the ox must be fed, and when the supply of pasture proves insufficient, this leads to the cultivation of corn. Here we find also the first rudiments of the co-operative system, as it is considered only fair that the ox should work at the pro- duction of his own food ; but of this our author strangely fails to take notice. In later ages, man proceeds to ride and to drive him. After this, there is nothing left to do but to make a god of him,—which is accordingly done. Mr. Wood admits that this last fact may be regarded as a very singular instance of the dominion of man over the ox.