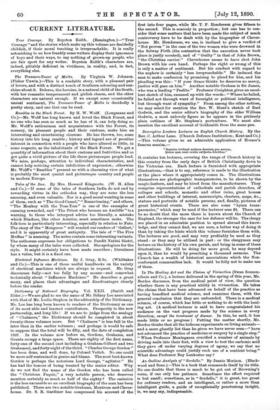 Tales of the Sun. By Mrs. Howard Kingscote. (W. H.

Allen and Co.)—If some of the tales of Southern India do not end by rewarding virtue in the orthodox way, they are none the less amusing, and even valuable. Nor is a good moral wanting in some of them, such as " The Good Camel," " Ranavirasing," and others. "The Monkey with the Tom-Tom" is one of the examples of cunning rewarded, and "The Priest who became an A.milditr " is a warning to those who interpret advice too literally, a mistake which Hindoos, like other Asiatics, must sometimes make. The folk-lore is particularly interesting, especially in relation to Fate. The story of the " Mongoose " will remind our readers of 'Gellert,' and it is apparently of great antiquity. _The tale of "The Five Muffins" is amusing. The notes contain some interesting variants. The authoress expresses her obligations to Pandit Natesa

by whom many of the tales were collected. She apologises for the style. It might certainly have been made smoother ; literalness has a value, but it is a fixed one.