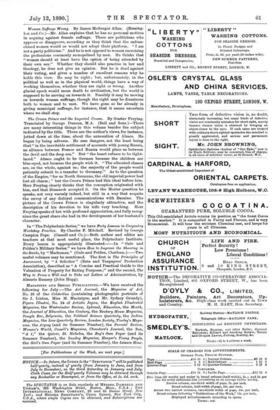 Co.)—Mr. Allan explains that he has no personal motives in arguing against female suffrage. There are politicians who approve or disapprove, according as they think that the enfran- chised women would or would not adopt their platform. "I am not a party politician." And he is not opposed to women exercising the professions commonly monopolised by men. He thinks that "women should at least have the option of being attended by their own sex." Whether they should also practise in law and theology, he does not give an opinion. But he is dead against their voting, and gives a number of excellent reasons why he holds this view. He may be right ; but, unfortunately, in the political as well as in the physical world, things have a way of working themselves, whether they are right or wrong. Another glacial epoch would mean death to civilisation, but the world is supposed to be moving on towards it. Possibly it may be moving on towards woman suffrage, though the right may be disastrous both to women and to men. We have gone so far already in giving municipal suffrage, for instance, that it seems uncertain where we shall stop.