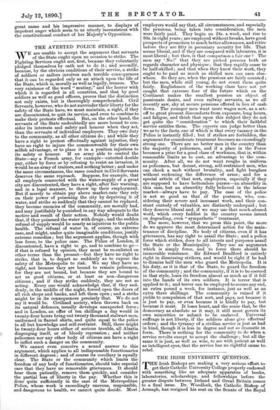 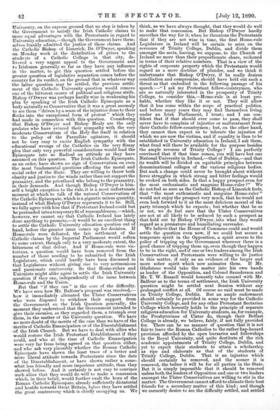 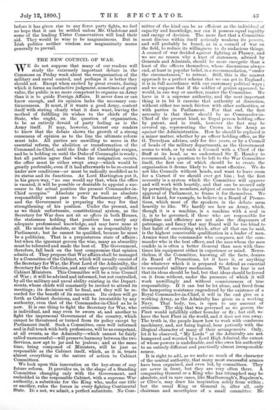 rICHE Irish Bishops are making a very serious effort to 1 get their Catholic University College properly endowed with something like an adequate apparatus of books,. laboratories, scholarships, and. fellowships before the greater dispute between Ireland and. Great Britain comes to a final issue. Dr. Woodlock, the Catholic Bishop of Armagh, has resigned his seat on the Senate of the Royal -University, on the express ground that no step is taken by -the Government to satisfy the Irish Catholic claims to artore equal advantages with the Protestants in regard to University education,—though the Government have them- selves frankly admitted the justice of these claims. And the Catholic Bishop of Limerick, Dr. O'Dwyer, speaking on Monday week at the distribution of prizes to the students of a Catholic College in that city, de- livered a very urgent appeal to the Government and to Irishmen generally so far as they have any influence in the matter, to get this question settled before the greater question of legislative separation comes before the country for its verdict, on the ground that in whatever way the latter question may be settled, the previous settle- ment of the Catholic University question would remove one of the bitterest causes of political and religious strife. Bishop O'Dwyer was perhaps hardly wise in weakening his Plea by speaking of the Irish Catholic Episcopate as a body naturally so Conservative that it was a great anomaly to see them "driven by a sense of the injustice done to their flocks into the exceptional form of protest" which they had made in connection with this question. Considering -that Bishop O'Dwyer and Bishop Healy are the only prelates who have evinced their sympathy with the very moderate Conservatism of the Holy See itself in relation to the policy of the Parnellite agitators, - it should not be very easy to excite English sympathy with the -educational wrongs of the Catholics on the very flimsy plea that only very powerful considerations would lead the Episcopate into so Radical an attitude as they have -assumed on this question. The Irish Catholic Episcopate, as an order, have shown no sign of Conservatism on even the most fundamental questions affecting the moral and social order of the State. They are willing to throw both -charity and justice to the winds rather than not support the peasantry, and the priesthood who belong to the peasantry, in their demands. And though Bishop O'Dwyer is him- self a bright exception to the rule, it is a most unfortunate moment at which to talk of the natural Conservatism of the Catholic Episcopate, which is a gigantic minus quantity, instead of what Bishop O'Dwyer represents it to be. Still, we fully agree with him that if Protestant Ireland could but be persuaded into a temporary fit of reasonableness,—which, kowever, we cannot say that Catholic Ireland has lately done anything to promote,—it would be an excellent thing to settle the Catholic University education question out of hind, before the greater issue comes up for decision. If Home-rule were defeated, the fair settlement of the 'Catholic claims by the Imperial Parliament would soften to some extent, though only to a very moderate extent, the bitterness of that defeat. And if Home-rule were vic- torious, a question would have been removed from the number of those needing to be submitted to the Irish Legislature, which could hardly have been discussed in that Legislature without giving rise to very acrimonious and passionate controversy. So that Home-rulers and Unionists might alike agree to settle the Irish University question if they can, independently of the issue between Home-rule and the Union.