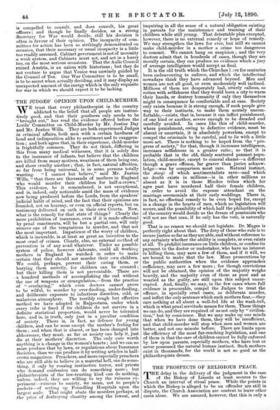 THE JUDGES' OPINION UPON CHILD-MURDER.

WE trust that every philanthropist in the country addicted to the belief that all people are instinc- tively good, and. that their goodness only needs to be -" brought out," has read the evidence offered before the - Lords' Committee on Child-Murder by Mr. Justice Day and Mr. Justice Wills. They are both experienced. Judges in criminal affairs, both men with a certain hardness of head and indisposition alike to sentiment and to exaggera- tion; and both agree that, in their experience, child-murder is frightfully common. They do not think, differing in this from many medical witnesses, that it is solely due to the insurance of infants, but believe that the children are killed from many motives, weariness of them being one, and sheer cruelty another ; that, in fact, natural affection, .so far from being universal, is in some persons totally wanting. "I cannot but believe," said Mr. Justice "that there are thousands of mothers in England -who would murder their children for half-a-crown."

• This evidence, be it remembered, is not exceptional, and is, indeed, only noticeable amid. the mass of evidence now being produced before the Lords, from the speakers' • judicial habit of mind, and the fact that their opinions are founded, not on hearsay, or even on official reports, but on testimony delivered on oath in their own Courts. Now, what is the remedy for that state of things ? Clearly the mere prohibition of insurance, even if it is made effectual by penal enactments, will be but a partial one, will only remove one of the temptations to murder, and that not the most important. Impatience of the worry of children, -which is incurable, is at least as great an incentive to the .most cruel of crimes. Clearly, also, no external method of prevention is of any avail whatever. Under no possible system of police, however elaborate, could all working mothers in England be watched. in order to make s certain that they should not murder their own children. We could, perhaps, prevent their eating them, or burying them secretly, for children can be counted ; but their killing them is not preventable. There are a hundred methods of accomplishing the end without • the use of weapons or strangulation.—from the practice of "overlaying," which even doctors cannot prove to be wilful, to murder by over-feeding, under-feeding, and deliberate exposure to infectious disorders, cold, or malarious atmosphere. The terribly rough but effective method we have adopted in Rajpootana, under which every tribe is fined if its children do not survive in a definite statistical proportion, would never be tolerated here, and is, in truth, only just in a peculiar condition • of society. There is, in fact, no defence for young s. children, and can be none except the mother's feeling for .them ; and when that is absent, or has been changed into • abhorrence, they must, as far as society can help it, just die at their mothers' discretion. The only cure worth anything is a change in the women's hearts ; and we can no more produce that by laws, or regulations about Insurance Societies, than we can produce it by writing articles in half- crown magazines. Preachers, and more especially preachers :who are still able to believe in a material hell, can do some- thing, if only by rousing instinctive terror, and priests who demand confession can do something more ; but philanthropists of the law-trusting kind can do nothing, -unless, indeed, they are willing to try the ruinous ex- periment—ruinous to society, we mean, not to people's pockets—of setting up Foundling Hospitals upon the largest scale. That might abate the murders perhaps, at the price of destroying chastity among the lowest, and. impairing in all the sense of a natural obligation existing in parents for the maintenance and training of their children while still young. That detestable plan excepted, however, there is no external remedy or hope of remedy. We may strengthen the laws for ever, but still we cannot make child-murder in a mother a crime too dangerous to commit. We cannot hang on suspicion ; and. the iery doctors admit that in hundreds of cases, though they are morally certain, they can produce no evidence which a jury of average intelligence would accept as final. It is the old. truth which the Churches Live for centuries been endeavouring to enforce, and which the intellectual nowadays think they have advanced beyond. Men and women are not all good, or even moderately well inclined. Millions of them are desperately bad, utterly callous, so rotten with selfishness that they would burn a city to warm their hands, or destroy humanity if only they themselves might in consequence be comfortable and at ease. Society only exists because it is strong enough, if such people give way to their instincts, to make them acutely uncom- fortable,—exists, that is, because it can inflict punishment, of one kind or another, severe enough to be dreaded and carefully avoided. In cases like this of child-murder, where punishment, owing to defective evidence, must be absent or uncertain, it is absolutely powerless, except to compel the criminals to be careful, and to lie with a little more art. There is nothing to be hoped from the "pro- gress of society," for that, though it increases intelligence, increases selfishness in a greater ratio ; so that it is probable that in the old, thinly scattered peasant popu- lation, child-murder, except to conceal shame—a different though a grave offence, far graver than juries acknow- ledge—was by comparison most rare. Natural instinct, the storge of which sentimentalists rave—and which no doubt exists in millions—is in other millions as absent as it is in those Hindoo tribes which for ages past have murdered half their female children, in order to avoid. the expense attendant on the marriage oeremonials at their early weddings. There is, in fact, no effectual remedy to be even hoped for, except in a change in the hearts of men, which no legislation will secure, and the possibility of which half the philanthropists of the country would deride as the dream of pessimists who will not see that man, if he only has the vote, is naturally good.

That is no reason we should not legislate. Dr. Magee is perfectly right about that. The duty of those who rule is to secure justice so far as they are able, and without reference to any certainty whether the ability is complete, or even exists at all. To prohibit insurance on little children, or confine its payment to the doctor or undertaker, who have no interest in killing them, may save a few of them, and if it will, we are bound to make that the law. More prosecutions by the public authorities when the evidence approaches sufficiency, may save a few more ; for though convictions will not be obtained, the. opinion of the majority weighs heavily, and the majority even of those as poor and as wearied. as the guilty, are still upon this subject uncor- rupted. And, finally, we may, in the few cases where full evidence is procurable, compel the Judges to treat the offence, in specially cruel cases, as deliberate murder, and inflict the only sentence which such mothers fear,—they care nothing at all about a well-fed life at the wash-tub, which is what penal servitude means for them. These things we can do, and they are required of us not only by "civilisa- tion," but by conscience. But we may make up our minds that -when we have done them, they will be insufficient, and that child-murder will stop when men and women are better, and not one minute before. There are limits upon the efficiency of the most far-reaching legislation, and one of them is that the care of children cannot be fully enforced. by law upon parents, especially mothers, who have lost or never possessed the natural human instinct. Such mothers exist in thousands, for the world is not so good as the philanthropists dream.