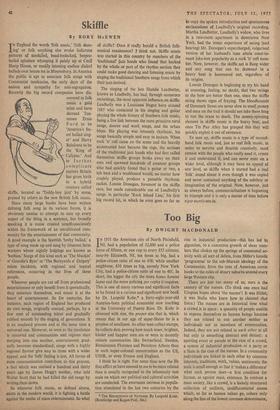 By RORY McEWEN Since many large books have been written defining folk song in its various forms, it . is obviously unwise to attempt to sum up every aspect of the thing in a sentence, but broadly speaking it is music created unselfconsciously within the framework of an uncultivated com- munity for the entertainment of that community. A good example is the Scottish 'bothy ballad,' a type of song made up and sung by itinerant farm workers whose nightly lodgings are known as 'bothies.' Songs of this kind such as The Muckin' o' Geordie's Byre' or 'The Barnyards o' Delgaty' relate incidents, with regional and topical references, occurring in the lives of these people.

Wherever people are cut off from professional entertainment or only benefit from it sporadically, they entertain themselves, and music is at the heart of entertainment. So for centuries, for instance, each region of England has produced its own songs, originally created, perhaps, by a few men of outstanding talent and gradually rubbed smooth by the singing of generations. It is an insulated process and at the same time a universal one. However, as soon as the insulation is removed and communities and regions start merging into one another, entertainment grad- ually becomes standardised; songs with a highly regional flavour give way to those with a wider appeal, and the 'folk' feeling is lost. All forms of mass communication contribute to this process, a fact which was realised a hundred and thirty years ago by James Hogg's mother, who told Walter Scott that he had killed the old songs by writing them down.

So wherever folk music, as defined above, exists in the modern world, it is fighting a battle against the media of mass entertainment. So what of skiffle? Does it really herald a British folk- musical renaissance? I think not. Skiffle music was started in this country by members of the 'traditional' jazz bands who found that backed by the whole or part of the rhythm section they could make good dancing and listening music by singing the traditional Southern songs from which their jazz derived.

The singing of the late Huddie Leadbettcr, known as Leadbelly, has had, through numerous recordings, the most apparent influence, on skiffle. Leadbelly was a Louisiana Negro born around 1885 who contained in his singing and guitar playing the whole history of Southern folk music, being a live link between the most primitive rural songs, dances and work songs, and the urban blues. His playing was intensely rhythmic, his songs basically simple and easy to imitate. When rock 'n' roll came on the scene and the heavily accentuated beat became the rage, the sections of the traditional jazz bands who had first called themselves skiffle groups broke away on their own and spawned hundreds of amateur groups who had quickly found that a guitar or two, a tub bass and a washboard would, no matter how crudely played, produce a passable rhythmic racket. Lonnie Donegan, foremost in the skiffle race, has made considerable use of Leadbelly's songs, in particular 'Rock Island Line,' his first big record hit, in which he even goes so far as to copy the spoken introduction and spontaneous exclamations of Leadbelly's original recording. Martha Leadbetter, Leadbelly's widow, who lives in a two-room apartment in downtown New York, had the ironic experience of seeing (and hearing) Mr. Donegan's supercharged, vulgarised version of her husband's tune attain coast-to- coast juke-box popularity as a rock 'n' roll num- ber. Now, however, the skiffle net is flung wider and any song that can be drowned in a heavy beat is hammered out, regardless of its origins.

Lonnie Donegan is beginning to try his hand at crooning, feeling, no doubt, that two strings to the bow are better than one, since the skiffle string shows signs of fraying. The bloodhounds of Denmark Street are never slow to smell money and once on the trail it should not take them long to run the craze to death. The money-spinning element in skiffle music is the heavy beat, and once Tin Pan Alley has grasped this they will quickly exploit it out of existence.

To sum up, skiffle music is a type of second- hand folk music and, just as real folk music, in order to survive and flourish creatively, must remain with the people who really need it, create it and understand it, and can never exist on a wider level, although it may have an appeal at any level, so skiffle when it started had a real 'folk' sound about it even though it was copied and never contained anything of the subtlety or imagination of the original. Now, however, just as always before, commercialisation is beginning to triumph and it is only a matter of time before rigor mortis sets in.