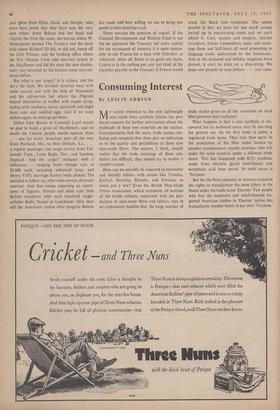 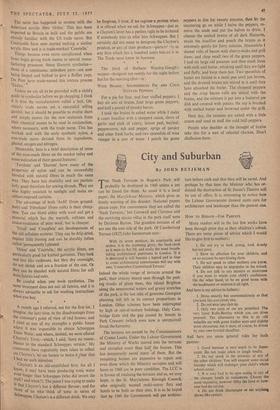 MY recent reference to the new lightweight suits made from synthetic fabrics has pro- duced requests for further information about the multitude of these new materials on the market. Correspondents find the many trade names con- fusing and complain that these give no indication as to the quality and possibilities of these new man-made fibres. The makers, I think, should realise that the trade markings of these syn- thetics are difficult; they should try to evolve a simpler system.

How can we possibly be expected to remember and identify fabrics with names like Tyrenka, Kirksyl, Seraceta, Britenka and Fortisan, to name just a few?' Even the British Man-Made Fibres Association, which represents all sections of the textile industry concerned with the pro- duction of man-made fibres and fabrics, says in an explanatory booklet that 'the large number of trade marks given to all the variations on each fibre prevents their inclusion.'

What happens is that a new synthetic is dis- covered but its technical name may be too long for general use. So the firm make it under a registered trade name. They may then agree to the production of the fibre under licence , by another manufacturer, usually overseas, who will make the same material under a different trade name. This has happened with ICI's synthetic made from ethylene glycol (anti-freeze) and terephtalic acid from petrol. Its trade name is `Terylene.'

But the Du Pont company in America acquired the rights to manufacture the same fabric in the States under the trade name 'Dacron.' Few people who buy the expensive and much-boosted im- ported American clothes in 'Dacron' realise this transatlantic wonder-fabric is our own `Terylene;

The same has happened in reverse with the American acrylic fibre 'Orion.' This has been imported to Britain in bulk and the public are already familiar with the US trade name. But Courtaulds have now started making a similar acrylic fibre and it is trade-marked 'Courtelle.'

Things become even more complicated when firms begin giving trade names to special manu- facturing processes. Some filament synthetics— those of a continuous, unbroken yarn—are now being looped and bulked to give a fluffier yarn. Du Pont have trade-named this texture process `Taslan.'

Unless we are all to be provided with a child's guide to synthetics before we go shopping, I think it is time the manufacturers called a halt. Ob- viously trade names are a successful selling gambit, but it should be possible to evolve short and simple names for the new materials from their chemical names to be used in conjunction, where necessary, with the trade name. This has worked well with the early synthetic nylon, a non-trade name devised from its ingredients, phenol, oxygen and nitrogen.

Meanwhile, here is a brief description of some of the man-made fibres on the market today and some indication of their special features : `Terylene' and 'Dacron' have many of the properties of nylon and can be successfully blended with natural fibres in much the same way. They have less elasticity and are particu- larly good therefore for sewing threads. They are also highly resistant to sunlight and make ex- cellent rotproof curtains. .

The advantage of both 'Ardir (from ground- nuts) and 'Fibrolane' (from milk) is their cheap- ness. You can blend either with wool. and get a material which has the warmth, softness and crease-resistance of pure wool, but is cheaper.

`Tricel' and 'Courpleta' are developments of the old cellulose acetates. They can be drip-dried, require little ironing and can be durably (often called 'permanently') pleated.

`Orlon' and 'Courtelle,' the acrylic fibres, are particularly good for knitted garments. They look and feel like cashmere, but they dry overnight, do not shrink and are a fraction of the cost. Or they can be blended with natural fibres for soft dress fabrics and suits.

Be careful when you wash synthetics. The same treatment does not suit all fabrics, and it is always advisable to ask for washing instructions When you buy.

A month ago I referred, not for the first (or, I imagine, the last) time, to the disadvantages from 10' the customer's point of view of tied houses; and I cited as one of my examples a public house where it was impossible to obtain Schweppes Tonic Water, and where, instead, we were offered Clayton's Tonic—which, I said, 'bore no resem- blance to the standard Schweppes version.' My comments have regrettably been taken to reflect on Clayton's; let me hasten to make it clear that I had no such intention. Clayton's is an old-established firm; for all I know, it may have been producing tonic water even longer than Schweppes (who did invent the !tuft? and when?). The point I was trying to make LS that Clayton's has a different flavour; and for those of us who think of tonic in terms of °ChWePPeS, Clayton's is a different drink. We may

be forgiven, I trust, if we register a protest when it is offered when we ask for Schweppes—just as a Clayton's lover has a perfect right to be irritated if somebody tries to offer him Schweppes. But I certainly did not mean to denigrate the Clayton's product, or any of their products—particut rly as any firm which has a hundred years beh.nJ it in The Trade must know its business.

The third of Barbara Worsley-Gough's recipes—designed not merely for the night before but for the morning after—is :

WITH BRAINS: SHEPHERDESS PIE AND COLD STUFFED PEPPERS For a pie for four, and four stuffed peppers, 1 buy six sets of brains, ,four large green peppers, and half a pound of streaky bacon.

I soak the brains in salted water while I make a court bouillon with a chopped onion, clove of garlic and stick of celery, lemon peel, bayleaf, peppercorns, salt and pepper, sprigs of parsley and other fresh herbs, and two spoonfuls of wine vinegar in a pint of water. I poach the green peppers in this for twenty minutes, then let the simmering go on while I halve the peppers, re- move the seeds and put the halves to drain. I cleanse the soaked brains of all dark filaments, strain the bouillon and poach the brains in it extremely gently for forty minutes. Meanwhile I skewer rolls of bacon with cherry-sticks and grill them; and chop small two of the green peppers.

I boil six large old potatoes and then mash them with milk and butter, whisking until they are light and fluffy, and keep them hot. Two spoonfuls of butter are heated in a saute pan until just brown, and the drained brains are stirred in it until they have absorbed the butter. The chopped peppers and the crisp bacon rolls are mixed with the brains, and the mixture is put into a buttered pie dish and covered with potato, the top is brushed with melted butter and browned under the grill.

Next day, the remains are mixed with a little cream and used to stuff the cold half-peppers.

People who shudder at the thought of brains take this for a sort of celestial chicken. Don't disillusion them.