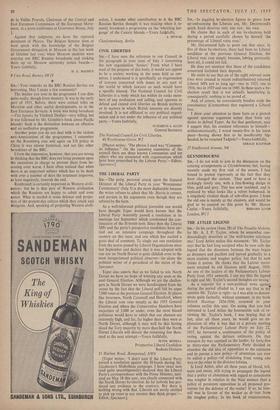 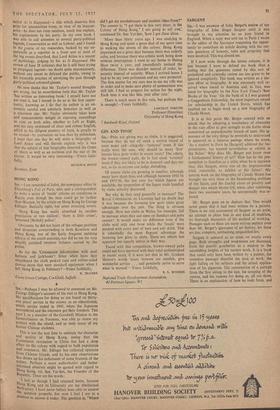 SIR,—In his review (June 28) of The Trouble-Makers, by Mr. A. J. P. Taylor, whom he somewhat con- descendingly describes as 'the well-known television star,' Lord Attlee makes this statement : 'Mr. Taylor says that he had long accepted what he now calls the legend that the dissenters between the wars began as dreamers and pacifists and moved gradually to a more realistic and tougher policy, but that he now thinks it untrue. He thinks that the Labour move- ment retained its, old illusions until August, 1939. As one of the leaders of the Parliamentary Labour Party from 1931 onwards, I can say that the legend is right and Mr. Taylor's second thoughts are wrong.'

As a reporter for a non-political news agency during the period alluded to, I can say that in my opinion Mr. Taylor is right—as I was able to demon- strate quite factually, without comment, in my book British Hustings 1924-1950, reviewed in your columns earlier this year. On seeing that you had entrusted to Lord Attlee the honourable task of re- viewing Mr. Taylor's book, I was hoping that at last, after all these years, he would give an ex- planation of why it was that at a private meeting of the Parliamentary Labour Party on July 22, 1937, he favoured a continuance of the policy of voting against the defence estimates. On that occasion he was capsized as the leader; by forty-five to thirty-nine the Parliamentary Party decided to abandon the old idea of opposition to the estimates and to pursue a new policy—if abstention can ever be called a policy—of abstaining from voting one way or the other in the division lobbies.

Is Lord Attlee, after all these years of blood, toil, tears and sweat, still trying to propagate the legend that a policy of abstention with regard to armaments was tougher in relation to the Nazi menace than a policy of persistent opposition to all proposed pro- visions for the defence of the realm? If so, he him- self was in favour of the weaker as di-'inct from the tougher policy. In his book of reminiscences,

called As It Happened—a title which deserves first prize for unconscious irony, in view of its inaccur- acies—he does not even mention, much less explain, his capsizement by his party. In my own book I was able to call attention to several party-political legends, Conservative as well as Labour, and I found in the course of my researches, backed by my ex- periences as a reporter in a front seat at most of the big events described, that Lord Attlee is a master of mythology, judging by his As It Happened. His review of June 28 indicates that he is still busy trying to propagate legends—no doubt quite unconsciously, without any intent to defraud the public, owing to his incurable practice of surveying the past through Party-political coloured glasses.

He now thinks that Mr. Taylor's second thoughts are wrong, but he nevertheless feels that Mr. Taylor has written an interesting book.' I myself have not yet read it, but I intend to do so at the first oppor- tunity, knowing as I do that its author is an ex- tremely careful and scholarly historian as well as a television star. Mr. Taylor obviously takes keen and commendable delight in exposing camouflage or cant on both sides, whether to Left or Right, and his easy command of clear and robust English, allied to his diligent mastery of facts, is greatly to be envied—by journalists no less than by politicians. I hope that one day he will write a biography of Lord Attlee and will therein explain why it was that the subject of that biography deserved the Order. of Merit as well as an earldom and the star of the Garter, It would be very interesting.—Yours faith- fully, ARTHUR H. BOOTH