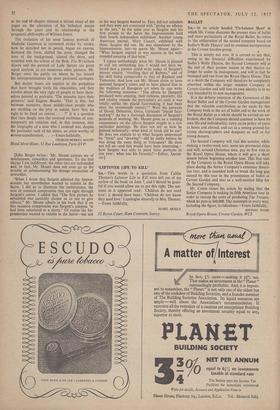 SIR,—In an article headed 'Un-balance Sheet' in which Mr. Coton

discusses the present state of ballet and more particularly of the Royal Ballet, he refers to 'the obliteration of the second company based on Sadler's Wells Theatre' and its eventual incorporation

in the Covent Garden group. •

This is simply not true. It is correct to say that, owing to the financial difficulties experienced by Sadler's Wells Theatre, the Second Company will at the end of their present season in that theatre no longer be under its management, and will in fact be 'managed and run from the Royal Opera House. That as a result the Company will therefore be completely absorbed within the larger resident Company at Covent Garden and will lose its own identity is in no way intended by its new management.

It is the definite intention of the Governors of the Royal Ballet and of the Covent Garden management that the valuable contribution so far made by this Company both to the art of ballet and to the work of the Royal Ballet as a whole should be carried on un- broken; that the Company should continue to have its own life and individuality, carry on its policy of tours at home and abroad, and act as a testing ground for young choreographers and designers as well as for young dancers.

The Second Company will visit this autumn, while making a twelve-week tour, some ten provincial cities and will, around Christmas time, pay its first visit to the Royal Opera House, where it will give a short season before beginning another tour. This first visit of the Company to the Royal Opera House will take place during the Senior Company's extensive Ameri- can tour, and is intended both to break the long gap caused by this tour in the presentation of ballet at Covent Garden and also as a well-merited fillip for the Second Company.

Mr. Coton closes his article by stating that the Senior Company is making its fifth American tour in order to recoup the costs of producing The Trojans, which he puts at £60,000. The statement in every way, including the figure, is ridiculous.—Yours faithfully,