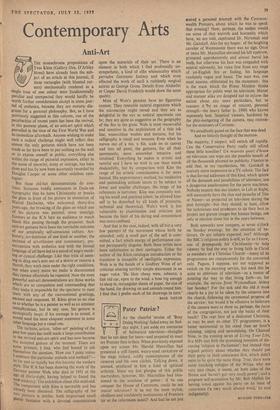 THE monochrome propositions of Yves Klein (Gallery One, D'Arblay Street) have already been the sub- ject of an article in this journal; if these rectangles (with blunted cor- ners) mechanically rendered in a single tone of one colour were fundamentally Peculiar and unexpected they would hardly be worth further consideration except in some jour- nal of esthetics, because they are esoteric dia- grams for a personal philosophy. But, as I have previously suggested in this column, one of the peculiarities of recent years has been the revival, in this postwar phase, of an anti-art spirit which prevailed in the time of the First World War and its immediate after?nath. Anyone wishing to make such a radical challenge might well reflect that almost the only gestures which have not been made so far have been to put nothing on the wall or to expose oneself in public; everything else within the range of pictorial expression, either in the name of sincerity, irony or outrage, has been done and has by now been accurately recorded by Douglas Cooper or some other sedulous cata- loguer.

" But these old-hat demonstrations do con- tinue. Someone boldly announces in Dada-ish typography that he hates Christianity or breaks the glass in front of his picture in emulation of Marcel Duchamp, who welcomed, thirty-five years ago, the breaking of the glass on which one of his pictures was painted; some nostalgic funsters at the ICA lure an audience to watch blank film passing through the. projector. Such anti-art gestures have been the inevitable outcome of our artistically self-conscious culture. Art- history, art-institutes of one kind or another, the increase of art-criticism and commentary, pre- occupation with aesthetics and with the formal language of art have led to a mood of angry mock- ing ot,cynical challenge. Like that trick of seem- ing to drag one's arm out of a sleeve or remove a thumb, they work once under the right conditions, but when every move we make is documented they cannot effectively be repeated. Now the most Powerful anti-art demonstrations are those works which are so compulsive and commanding that they make it impossible for the spectator to meet them with any of the conventional greetings, excuses and responses. M. Klein gives us no clue as to whether he is a painter as well as an amateur metaphysician, but in any case, his gesture is strategically inept; if his message is to sound, it would need the most eloquent statement in some other language but a visual one. The tachiste, action, 'other-art' painting of the Past few years has itself made a large contribution to the revived anti-art spirit and has now become the accepted gesture of the moment. There are some painters, I find, who feel bound to ask themselves the question, 'How can I paint unless I embrace this particular attitude and method?'— so far and so rapidly has this become the modern style. The ICA has been showing the work of the German painter Wols who died in 1951 at the age of thirty-eight, having helped to found the new tendency. The exhibition closes this weekend. The comparison with Klee is inevitable and has already been discussed. The calligraphy of the "ve painters is similar, both improvised small Poetic fantasies with a devoted concentration

upon the materials of their art. There is an element in both which I find profoundly un- sympathetic, a kind of elfin whimsicality which pervades Germanic fantasy and which even affected the work of such a ruthlessly surgical satirist as George Grosz. Details from Altdorfer or Caspar David Friedrich would show the same quality.

Most of Wols's pictures have nb figurative content. They resemble natural organisms which the microscope might reveal and they are as delightful to the eye as natural specimens can be; they are quite as suggestive as the geography of the fire in the grate. Wols is most resourceful and sensitive in, the exploitation of a thin ink line, watercolour washes and textures, but his calligraphy is timid and tenuous. Even when he moves out of a 6in. x 8in. scale on to canvas and into oil paint, the gestures, for all their spontaneity, seem somewhat tentative and inhibited: Everything he makes is artistic and tasteful and I have no wish to use these words disdainfully, but by comparison with Klee the range of his artistic consciousness is far more limited. His improvisatory method, his meditative and painstaking attitude seems to be subject to fewer and smaller challenges, the range of his references is narrower. Klee was constantly test- ing his small and precious talent; he allowed him- self to be disturbed by all kinds of pressures, technical and theoretical. Wols's work is less vulnerable to examination and criticism just because the limit of his daring and commitrhent was more confined.

And that is the case, indeed, with all but a very few painters of the movement whose birth he attended; only a small part of the self is com- mitted, a fact which energy of performance can- not permanently disguise. Both these artists have been unfortunate in their apologists. Either the author of the Klein catalogue introduction or his translator is incapable of intelligible expression. Wols is in the hands of a Godfrey Winn of art criticism uttering terribly simple statements in an eager voice. 'He likes cheap wine, tobacco, a fast old car, open to the wind, a boat big enough to sleep in, rectangular sheets of paper, the size of the hand, for drawing on and animals round him. I find that I prefer each of his drawings in turn.'