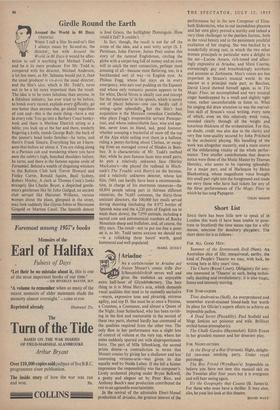 As a curtain-raiser to Ariadne auf Naxos Mozart's comic trifle Der Schauspieldirektoi serves well and gives the audience an enjoyable extra half-hour of GlyndebOurnery. The best thing in it is Mme Hens aria, which demands vocal qualities that tend to be mutually exclusive —warm, expressive tone and phrasing, extreme agility, and top D. She must be at once a Pamina, a Countess, a Constanze, and almost a Queen of the Night. Joan Sutherland, who has been ravish- ing in the first and memorable in the second of these two parts, showed hardly less command of the qualities required from the other two. The only flaw in her performance was a slight loss of control of volume at the very top, where her notes suddenly spurted out with disproportionate force. The part of Mlle Silberklang, the second prima donna—a contradiction in terms that Mozart creates by giving her a shallower and less ' interesting virtuoso-aria—was given its due equally well by Naida Labay. If she left a fainter impression the responsibility was the composer's. Lively orchestral playing under Bryan Balkwill, a pretty and elegant set by Peter Rice, and Anthony Besch's neat production contributed the

rest to an agreeable entertainment. • In the revival of the admirable Ebert-Messel production of Ariadne, the greatest interest of the

performance lay in the new Composer of Elisa- beth Soderstrom, who to our incredulous pleasure and her own glory proved a worthy and indeed a very close challenger to the peerless Jurinac, both in the vocal beauty and in the passionate youthful exaltation of her singing. She was backed by a wonderfully strong cast, in which the two other women principals in particular were a delight to the ear—Lucine Amara, rich-toned and affect- ingly expressive as Ariadne, and Mimi Coertse, entrancingly gay and breathtakingly acrobatic and accurate as Zerbinetta. Men's voices are less important in Strauss's musical world. In the nearest to a principal male part, as Bacchus, David Lloyd showed himself again, as in The Magic Flute, an accomplished and very musical singer handicapped by a small and slightly tight voice, rather uncomfortable to listen to. What his singing did draw attention to was the marvel- lous skill of Strauss's vocal writing, every note of which, even on this relatively weak voice, sounded clearly through all the weight and luxurious thickness of the orchestration. For this, no doubt, credit was also due to the clarity and very fine tone-quality secured by John Pritchard in the orchestral playing. His handling of the work was altogether masterly, and a main source of the exhilarating vitality of the whole perfor- mance. Two smaller contributions that deserve notice were those of the Music Master by Thomas Hemsley, who seems to be ripening splendidly for a major part, and of Harlequin by Heinz Blankenburg, whose magnificent voice brought this small part right into the foreground and made me envy those who have had tickets for any of the three performances of The Magic Flute in which he has sung Papageno.