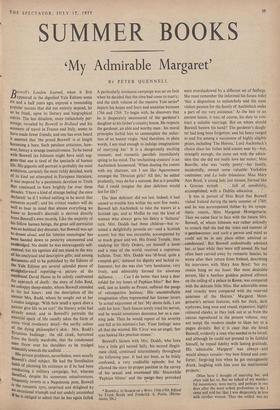 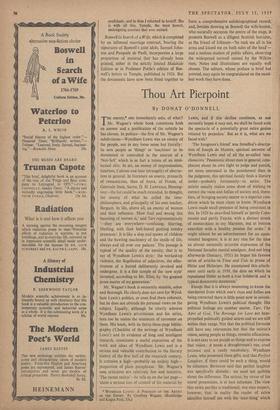 Doswell's London Journal, when it first p appeared in the dignified Yale Edition some six and a half years ago, enjoyed a resounding Popular success that did not entirely depend, let us be frank, upon its literary and biographical merits. The less dissolute, more melancholy per- sonage, revealed by Boswell in Holland and his accounts of travel in France and Italy, seems to have made fewer friends; and one has even heard it asserted that 'the proud Boswell' is at length becoming a bore. Such petulant criticisms, how- ever, betray a strange insensitiveness. To be bored with Boswell (as Johnson might have said) sug- gests that one is tired of the spectacle of human life. His gigantic self-portrait is probably the most ambitious, certainly the most richly detailed, work of its kind yet attempted in European literature; it was inspired by a passionate devotion to Truth that continued to burn brightly for over three decades. 'I have a kind of strange feeling' (he once declared) 'as if I wished nothing to be secret that concerns myself'; and his critical readers will do well to bear in mind that almost everything we know to Boswell's discredit is derived directly from Boswell's own recordq. Like the majority of his fellow human beings, the great self-portraitist was an habitual day-dreamer; but Boswell was apt to dream aloud, and his 'interior monologue' has been handed down to posterity uncensored and unabridged. No doubt he was extravagantly self- centred; but his egotism did not stand in the way of his analytical and descriptive gifts; and among documents still to be published by the Editors of the Yale Edition are several splendid pieces of straightforward reporting—a picture of the moribund David Hume as he calmly confronted the approach of death: the story of John Reid, an unhappy sheep-stealer, whom Boswell attended in his last hours : and the description of the sinister Mrs. Rudd, whom he sought out at her London lodgings. 'With how small a speck does a painter give life to an eye!' the literary artist had already noted; and in Boswell's portraits the essential spark of life usually takes the form of some vivid revelatory detail—the earthy colour of the dying philosopher's skin : Mrs. Rudd's flirtatious badinage : the old cloak, borrowed from the family wardrobe, that the condemned man threw over his shoulders as he trudged miserably towards the scaffold. . . . His private problems, nevertheless, were usually Boswell's chief subject. He had the Stendhalian habit of planning his existence as if he had been conducting a military campaign; but, whereas Stendhat, despite his numerous misadventures, frequently reverts to a Napoleonic pose, Boswell Is the romantic tyro, surprised and delighted by an occasional triumph and not unduly astonished if he is obliged to admit that he has again failed.

A particularly strenuous campaign was set on foot when he decided that the time had come to marry; and the sixth volume of the massive Yale series* depicts his hopes and fears and anxieties between 1766 and 1769. To begin with, he discovers that he is desperately enamoured of the gardener's daughter at his father's country house. He respects the gardener, an able and worthy man : his moral principles forbid him to contemplate the seduc- tion of an honest virgin. 'And therefore, in plain words, I am mad enough to indulge imaginations of marrying her.' It is a dangerously exciting moment; and romantic parallels immediately spring to his mind. The 'enchanting creature' is an Auchinleck housemaid. 'When dusting the rooms with my charmer, am I not like Agamemnon amongst the Thracian girls? All this,' he added prudently, 'may do for a summer. But is it possible that I could imagine the dear delirium would last for life?'

The 'dear delirium' did not last. Indeed, it had ceased to trouble him within the next few weeks. Boswell left Auchinleck to take the waters at a Scottish spa; and at Moffat he met the kind of woman who always gave his fancy a 'Sultanic' turn. Mrs. Dodds had three children—but re- tained a delightfully juvenile air—and a Scottish accent; but that was excusable, accompanied by so much grace and wit. His friend Temple, then studying for Holy Orders, yet himself a lover and a man of the world, received a rapturous bulletin. True, Mrs. Dodds was 'ill-bred, quite a rompish girl,' debased his dignity and lacked re- finement; but she was also 'very handsome, very lively, and admirably formed for amorous dalliance. . . . Can I do better than keep a dear infidel for my hours of Paphian bliss?' But Bos- well, just as keenly as Proust, suffered the pangs of retrospective jealousy. His uncontrollable imagination often represented her former lovers 'in actual enjoyment of her. My desire fails, I am unfit for love.' Such fiascos sorely tried his nerves, and he would sometimes denounce her as a cun- ning jade. Then he would repent of his severity and fall at his mistress's feet. 'Finer feelings' were all that she wanted. His 'Circe' was an angel; her eyes looked like precious stones.'

Boswell's liaison with Mrs. Dodds, who bore him a little girl named Sally, his second illegiti- mate child, continued intermittently throughout the following year. It had not been, as he freely confessed, a very creditable episode; but he allowed the story its proper position in the survey of his sexual and emotional life. Meanwhile 'Paphian blisses' and the pangs they provoked

were overshadowed by a different set of feelings. She must remember (he informed his future wife) 'that a disposition to melancholy and the most violent passion for the family of Auchinleck make a part of my very existence.' As the heir to an ancient house, it was, of course, his duty to con- tract a suitable marriage. But on whom should Boswell bestow his hand? The gardener's daugh- ter had long been forgotten; and his fancy ranged to and fro among a succession of highly eligible prizes, including 'The Heiress,' Lord Auchinleck's choice since her father held estates near by—but, strangely enough, she came out with the admis- sion that she did not really love her suitor; Miss Bosville, who was 'vastly pretty'—her family, incidentally, owned some valuable Yorkshire coalmines; and La belle Irlandaise, Miss Mary Ann Boyd, 'a young lady just sixteen, formed like a Grecian nymph . . . full of sensibiliity, accomplished, with a Dublin education. . .

It was in pursuit of Miss Boyd that Boswell visited Ireland during the early summer of 1769; and he was accompanied thither by his sympa- thetic cousin, Miss Margaret Montgomerie. Thus we come face to face with the future Mrs. Boswell, of whom Johnson was rather unkindly to remark that she had the 'mien and manner of a-gentlewoman; and such a person and mind as could not be in any place either admired or condemned.' But Boswell undoubtedly admired her, at least while they were still unwed. He had often been carried away by romantic fancies, he wrote after their return from Ireland, describing his interviews with Mary Ann Boyd; 'but my cousin hung on my heart. Her most desirable person, like a heathen goddess painted alfresco on the ceiling of a palace in Rome, was compared with the delicate little Miss. Her admirable sense and vivacity were compared with the reserved quietness of the Heiress.' Margaret Mont- gomerie's serious features, with her thick, dark eyebrows, long nose and round, expansive, highly coloured cheeks, as they look out at us from the canvas reproduced in the present volume, may not tempt the modern reader to liken her to a pagan divinity. But it is clear that she loved Boswell, evidently a man who needed to be loved; and although he could not pretend to be faithful himself, he repaid fidelity with lasting gratitude. His 'admirable Margaret' was always—and would always remain—'my best friend and com- forter,' forgiving him when he got outrageously drunk, laughing with him over his matrimonial projects :

Often have 1 thought of marrying her, and

often told her so. But we talked of my wonder- ful inconstancy, were merry, and perhaps in two days after the most ardent professions to her I came and told her that I was desperately in love with another woman. Then she smiled, was my

confidante, and in time I returned to herself. She is with all this, Temple, the most honest, undesigning creature that ever existed.

Boswell in Search of a Wife, which is completed by an informal marriage contract, bearing the signatures of Boswell's joint idols, Samuel John- son and Pasquale de Paoli, incorporates a large proportion of material that has already been printed, either in the strictly limited Malahide Edition or in Professor Pottle's edition of Bos- well's letters to Temple, published in 1924. But the documents have now been fitted together to form a comprehensive autobiographical record; and, besides showing us Boswell the wife-hunter, who naturally occupies the centre of the stage, it presents Boswell as a diligent Scottish barrister, as the friend of Johnson—'he took me all in his arms and kissed me on both sides of the head'— and a zealous student of public affairs, observing the widespread turmoil caused by the Wilkite riots. Notes and illustrations are equally well chosen. The editors, whose preface is brief but pointed, may again be congratulated on the excel- lent work they have done.