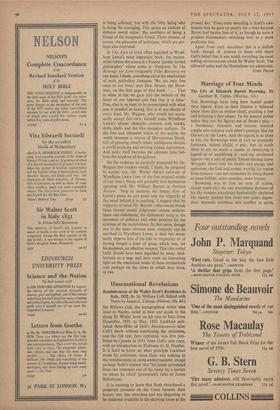 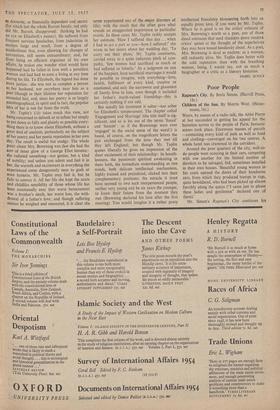 THE Brownings have long been buried under their legend. Even in their lifetime it billowed about them like an outsize cloak, puzzling a few and irritating a few others. To the general public today they are the figures out of Besier's play- a handsome, romantic and famous married couple who enhance each other's prestige, like the Oliviers or the Lunts. And the legend is so close to life, the Brownings were in fact so unusually fortunate, indeed idyllic, a pair, that to reach them is not so much a matter of destroying a legend as of amplifying it : and the cardboard figures—he a sort of poetic Tarzan blazing down Wimpole Street with his health and energy and optimism; she frail and ardent, waiting for rescue from tyranny—are not minimised by being shown as more fallible, more complex, more human.

Browning was in fact no man of action, except poetically; the one precipitous decision of his (by modern standards) fantastically sheltered life merely pitched him from one quiet, depen- dent, domestic existence into another as quiet, as domestic, as financially dependent and secure (for which last the whole Barrett family, not only old Mr. Barrett, disapproved : thinking he had an eye on Elizabeth's money). He suffered from frequent nervous headaches, from indecision in matters large and small, from a degree of maidenliness that, even allowing for changes of convention, still seems extraordinary; and, far from being an efficient organiser of his own affairs, he makes one wonder what would have happened had he fallen in love with a penniless woman and had had to earn a living at any time during his life. To Elizabeth, the legend has done more justice : she was not as complex a person as her husband, nor anywhere near him as a poet (though in their lifetime her reputation far exceeded his), and, since her poetry is so largely autobiographical, in spirit and in fact, the popular idea of her is not far from the truth.

Mr. Taplin's Life takes much this view, not being concerned to debunk or to inflate but simply to put down as fully and plainly as possible every- thing there is to know about Elizabeth, without a great deal of analysis, particularly on the subject of her poetry and her poetic reputation in her own day. The result is useful but stodgy. The whole point about Mrs. Browning was that she had the sort of inner glow of a George Eliot heroine : she radiated something—not genius, but a kind of nobility; and unless you admit and feel it in her, the warmth and excitement in everything she experienced come dangerously near to gush or even hysteria. Mr. Taplin may feel it, but he fails to convey it. All her life she kept the acute and childlike sensibility of those whose life has been emotionally easy (her worst bereavement was a brother's death, her worst loss, the with- drawal of a father's love; and though suffering cannot be weighed and measured, it is clear she

never experienced any of the major disasters of life); with the result that she often gave what sounds an exaggerated importance to particular events. In these cases Mr. Taplin rashly accepts her estimate. 'How I suffered that day ... when I had to act a part to you—how-I suffered!' she wrote to her sisters about her wedding day. `To carry out their plans,' Mr. Taplin comments, carried away to a quite ludicrous pitch of sym- pathy, 'few women had sacrificed as much or had suffered so bitterly.' As a judgment on one of the happiest, least sacrificial marriages it would be possible to imagine, with everything—love, health, fulfilment of every kind, creative or emotional, and only the narrowest and gloomiest of family lives to lose, even though it included her father's much-valued friendship—this is certainly nothing if not odd.

But usually his treatment is sober—too sober for Elizabeth's temperament. The chapter called `Engagement and Marriage' (the title itself is sig- nificant, and so is his use of the terms 'fiancé' and 'fiancée' : as if the Brownings were ever `engaged' in the social sense of the word I) is based, of course, on the magnificent letters the pair exchanged from the time they met till they left England; but though Mr. Taplin quotes liberally he gives no impression of the sheer excitement of their relationship : its breath- lessness, the passionate spiritual awakening in them both, the immediate understanding as two minds, both delicate intellectual mechanisms, highly trained and prejudiced, clicked into their complementary positions; the miracle it must have seemed to two such inexperienced people, neither very young and he six years the younger, to know their future from the moment they met (Browning declared his love after the first meeting). You would imagine it a rather prosy intellectual friendship blossoming forth into an equally prosy love, if you went by Mr. Taplin. Where he is good is on the critics' estimate at Mrs. Browning's worth as a poet, one of those dated estimates that send shudders down modern critics' spines at the thought of the superlatives they may have tossed heedlessly about. As a poet, Mrs. Browning is dead as mutton; as a woman, still radiantly alive. Mr. Taplin does better with the cold reputation than with the breathing woman, being, I would say, not so much a biographer or a critic as a literary historian.