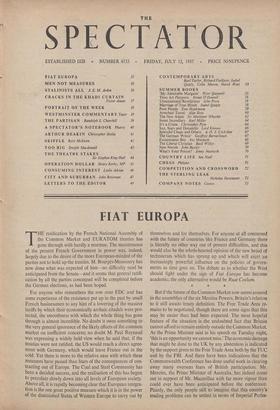 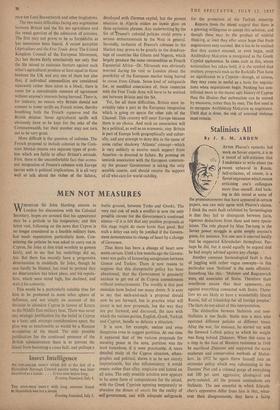 THE ratification by the French National Assembly of the Common Market and EURATOM treaties has gone through with hardly a murmur. The maintenance of the present French Government in power was, indeed, largely due to the desire of the more European-minded of the parties not to hold up the treaties. M. Bourges-Maunoury has now done what was expected of him—no difficulty need be anticipated from the Senate—and it seems that general ratifi- cation by all the parties concerned will be completed before the German elections, as had been hoped.

For anyone who remembers the row over EDC and has some experience of the resistance put up in the past by small French businessmen to any hint of a lowering of the massive tariffs by which their economically archaic citadels were pro- tected, the smoothness with which the whole thing has gone through is almost incredible. No doubt it owes something to the very general ignorance of the likely effects of the common market on inefficient concerns; no doubt M. Paul Reynaud was expressing a widely held view when he said that, if the treaties were not ratified, the US would reach a direct agree- ment with Germany, which would leave France out in the cold. Yet there is more to the relative ease with which these measures have passed than fears of the consequences of con- tracting out of Europe. The Coal and Steel Community has been a decided success, and the realisation of this has begun to percolate slowly down into all levels of European society. Above all, it is rapidly becoming clear that European integra- tion is the one great positive measure which it is in the power of the diminished States of Western Europe to carry out by themselves and for themselves. For anyone at all concerned with the future of countries like France and Germany there is literally no other way out of present difficulties, and this would also be the whole-hearted opinion of the new breed of technocrats which has sprung up and which will exert an increasingly powerful influence on the policies of govern- ments as time goes on. The debate as to whether the West should fight under the sign of Fiat Europa has become academic; the only alternative would be Ruat Coelum.

But if the future of the Common Market now seems assured in the assemblies of the six Messina Powers, Britain's relation to it still awaits treaty definition. The Free Trade Area re- mains to be negotiated, though there are some signs that this may be easier than had been expected. The most hopeful feature of the situation is the undoubted fact that Britain cannot afford to remain entirely outside the Common Market. As the Prime Minister said in his speech on Tuesday night, `this is an opportunity we cannot miss.' The economic damage that might be done to the UK by any abstention is indicated by the support given to the Free Trade Area both by the TUC and by the FBI. And there have been indications that the Commonwealth Conference has done useful work in clearing away many overseas fears of British participation. Mr. Menzies, the Prime Minister of Australia, has indeed come out in support of Mr. Macmillan with far more vigour than could ever have been anticipated before the conference. Plainly, the only people still to imagine that this country's trading problems can be settled in terms of Imperial Prefer-

ence are Lord Beaverbrook and other troglodytes.

The two main difficulties facing any negotiation between Britain and the Six are agriculture and the vexed question of the admission of colonies. The first may not prove to be as formidable as has sometimes been feared. A recent pamphlet (Agriculture and the Free Trade Area: The United Kingdom Council of the European Movement, 2s.) has shown fairly conclusively not only that the Six intend to maintain barriers against each other's agricultural produce at least equal to those between the UK and any one of them but also that, if individual commodities are considered separately rather than taken in a block, there is room for a considerable measure of agreement without anyone's interests being harmed. There is, for instance, no reason why Britain should not consent to lower tariffs on French wines, thereby benefiting both the French vigneron and the British drinker. Some agricultural tariffs will obviously have to be kept for the sake of the Commonwealth, but their number may not turn out to be very great.

More difficult is the question of colonies. The French proposal to include colonies in the Com- mon Market creates two separate types of prob- lem which are liable to affect Britain's attitude. First, there is the uncomfortable fact that econo- mic integration of France's colonies with Europe carries with it political implications. It is all very well to talk about the riches of the Sahara, developed with German capital, but the present situation in Algeria makes an ironic gloss on these optimistic phrases. Any underwriting by the Six of Trance's colonial policies could prove a serious embarrassment to the West in general. Secondly, inclusion of France's colonies in the Market may prove to be greatly to the disadvan- tage of countries like Ghana and Nigeria, which largely produce the same commodities as French Equatorial Africa—Dr. Nkrumah was obviously worried during his visit to London about the possibility of the European market being barred to cocoa from Ghana. Some kind of safeguards for, or modified association of, these countries with the Free Trade Area will have to be worked out between Britain and the Six.

Yet, for all these difficulties, Britain must in- evitably take a part in the European integration which is going on apace the other side of the Channel. This country will enter Europe because there is no choice. And such an association will be a political, as well as an economic, step. Britain is part of Europe both geographically and cultur- ally, and any attempt to deny this in the name of some rather shadowy 'Atlantic' concept—which is very unlikely to receive much support from America—is doomed to failure. By pressing on towards association with the European commun- ity the present Government is taking the only sensible course, and should receive the support of all who care for world stability.