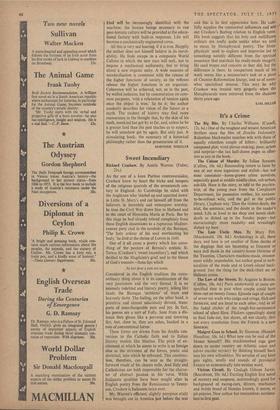 As the son of a keen Puritan controversialist, Crashaw knew by heart the tricks and tempers of the religious quarrels of the seventeenth cen- tury in England. At Cambridge he sided with the Anglicans who 'started up and squatted down' in Little St. Mary's and cut himself off from the believers in immobile and extempore worship. In time the Civil War drove him to Holland and to the court of Henrietta Maria at Paris. But by this stage he had already retired completely from these English dissensions to a rapturous Mediter- ranean piety clad in the symbols of the Baroque. `The holy ardour of his soul overheating his body,' he died at the shrine of Loreto in 1649.

Out of it all came a poetry which has some- thing of the posture of Bernini's ecstatic St. Teresa (Crashaw's 'sweet incendiary'), and which thrilled to the Magdalen's grief and to the theme of God's wounds—those lips which At too dear a rate are roses.

Considered in the English tradition the extra- ordinary thing about it is its combination of the very passionate and the very formal. It is an intensely indebted and literary poetry, telling like beads the Baroque 'emblems' of tears and heavenly darts. The feeling, on the other hand, is primitive and almost salaciously devout, trans- ports of interchangeable pain and joy. In fact, his poems are a sort of Folly. Seen from a dis- tance they gleam like a perverse and towering fire, but, close to, they are ashes, banked in a rote of conventional forms.

These forms are drawn from his double con- version to the Catholic faith and to Italian literary models like Marino. The pitch of ex- citement at which he seems to write is as foreign also as the strictness of the forms, poetic and doctrinal, into which he retreated. This combina- tion, therefore, can be seen as the straight- forward result of his chosen exile. And Italy and Catholicism are both responsible for the charac- ter of abstract passion in his verse. While Italianate qualities have been sought after in English poetry from the Renaissance to Tenny- son, Crashaw is Italianate twice over.

Mr. Warren's efficient, slightly pompous study was brought out in America just before the war and this is its first appearance here. He care- fully supplies the continental influences and sets r out Crashaw's fleeting relation to English verse. His book suggests that his holy and mellifluous ardours are really quite unlike what we tend to mean by Metaphysical poetry. The Meta- physicals' need to explore and improvise led to something notably different from the spiritual assurance that marshals his ready-made imagery.. He used tropes and conceits as they did, but the difference is there. In comparison much of his work seems like a seminarian's task or a piece of Counter-Reformation liturgy, and so of some- what specialised interest. This may be why Crashaw was treated very gingerly when the Metaphysicals were retrieved from the shadows thirty years ago.