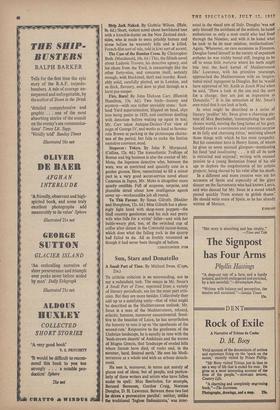 A Small Part of Time. By Michael Swan. (Cape, 21s.) To criticise criticism is an unrewarding, not to say a redundant, task. The essays in Mr. Swan's A Small Part of Time, reprinted from a variety of literary periodicals, are for the most part criti- cism. But they are more besides. Collectively they add up to a satisfying unity—that of what might be described as the Mediterranean outlook. Mr. Swan is a man of the Mediterranean, relaxed, eclectic, humane, moreover unsentimental. Sensi- tive to the beauties of Lecce, he has nevertheless the honesty to sum it up as 'the apotheosis of the second-rate.' Responsive to the gentleness of the Umbrian landscape, he is equally in tune with the 'bush-strewn deserts' of Andalusia and the wastes of Magna Grwcia, that 'landscape of eroded hills where forests have died, of rocks and, in the summer, hard, fissured earth.' He sees his Medi- terranean as a whole and with an urbane detach- ment.

He sees it, moreover, in terms not merely of places and of ideas, but of people, and particu- larly of those writers and artists who have fallen under its spell: Max Beerbohm, for example, Bernard Berenson, Gordon Craig, Norman Douglas, D. H. Lawrence. Between these two last he draws a provocative parallel: neither, unlike the traditional 'Inglese Italianizzato: was inter- ested in the visual arts of Italy. Douglas 'was not only himself the antithesis of the [esthete, he hated estheticism as only a man could who had lived through the Nineties; and with it he hated what he took to be its near relation, intellectualism.' Again, 'Whenever, on rare occasions in Florence, Douglas found himself in the society of expatriate aesthetes he was visibly bored stiff, longing to be off to some little trattoria where his teeth might bite into the hard kernel of Mediterranean life.' Lawrence, with his primitive yearnings, approached the Mediterranean with an 'inspira- tional mind' repugnant to Douglas. But he 'would have approved of Mr. Keith in South Wind when he said, "Have a look at the sun and the stars for a change; they are just as impressive as Donatello."' It is the attraction of Mr. Swan's own mind that it can look at both.

In what might be described as a series of literary 'profiles' Mr. Swan gives a charming pic- ture of Max Beerbohm, 'contemplating his small chosen world, moving the long lashes of his grey, hooded eyes in a continuous and innocent surprise at its folly and charming betise: satirising always those things with which he has most sympathy. But his consistent hero is Henry James, of whom he gives us some unusual glimpses—masticating his food `and insalivating . . . it till all its taste is extracted and enjoyed'; writing with unusual passion to a young Bostonian friend of his old age to deplore the megalomania of his artistic projects; being shaved by his valet after his death.

In a different and more creative vein are his accounts of Spain and especially of the gipsy dancer on the Sacromonte who had known Lorca, and who danced for Mr. Swan in a mood which passed quickly 'from ecstasy to girlish shame.' He should write more of Spain, as he has already written of Mexico.