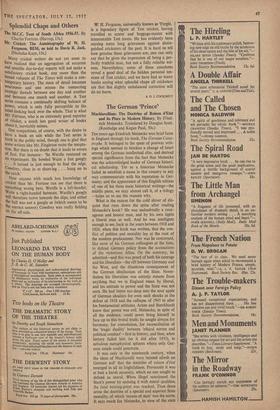 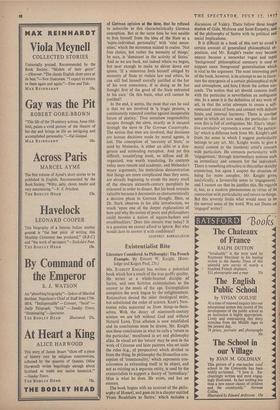 Machiavellism: The Doctrine of Raison d'Etat and its Place in Modern History. By Fried- rich Meinecke. Translated by Douglas Scott. (Routledge and Kegan Paul, 50s.)

TEN years ago Friedrich Meinecke won brief fame in England through his book, The German Catas- trophe. It belonged to the spate of postwar writ- ings which seemed to betoken a change of heart among the German intellectual elite, and derived special significance from the fact that Meinecke was the acknowledged leader of German histori- cal scholarship. Yet as a historian Meinecke failed to establish a name in this country in any way commensurate with his reputation in Ger- many; and the appearance of this English edition of one of his three main historical writings—the middle piece, we may almost call it, of a trilogy —helps us to see the reasons why.

What is the reason for the cold shiver of dis- quiet that runs down the spine after reading Mcinecke's book? He was undoubtedly a cour- ageous and honest man, and by his own lights a liberal man as well. And he was intelligent enough to see, back in the years between 1918 and 1924, when this book was written, that the con- flict of politics and morality lay at the root of the modern predicament. Nor was he concerned, like most of his German colleagues at the time, to defend German policy from the accusations of the victorious Allies. On the contrary, he admitted—and this was proof of both his courage and his liberalism—the rift between Germany and the West, and the disastrous consequences of the German idealisation of the State. Never- theless his liberalism was entirely remote from anything that we in England mean by liberal, and his attitude to power and the State was not ours. He had bitten too deep into the sour apple of German idealism for even such shocks as the defeat of 1918 and the collapse of 1945 to alter his fundamental attitudes. Acton and Burckhardt knew that power was evil. Meinecke, in spite of all the evidence, could never bring himself to face up to this brutal truth; he sought always for harmony, for consolation, for reconciliation of the 'tragic duality' between 'ethical norms and political conduct'—first in history, and then, when history failed him (as it did after 1933), in nebulous metaphysical spheres where only Ger- man minds could penetrate.

It was only in the nineteenth century, when the ideas of Machiavelli were 'minted afresh on German soil' that the doctrine of raison d'Etat emerged in all its frightfulness. Previously it was at best a harsh necessity, which no one sought to defend as moral. When Hegel sanctioned the State's power by enduing it with moral qualities, the fatal turning-point was reached. Then there arose the doctrine of a special and superior State morality, of which 'reason of state' was the norm. It says much for Meinecke, in view of the state of German opinion at the time, that he refused to subscribe to this characteristically German conception. But at the same time he was unable to free himself from the idea of the State as a `supra-individual personality' with 'vital neces- sities,' which the statesman existed to realise. 'Not free choice, but rather the necessity of things,' he says, is 'dominant in the activity of States.' And so we are back, not indeed where we began, but near enough to make us shiver down our spines. 'If a statesman feels himself obliged by necessity of State to violate law and ethics, he can still feel himself morally justified at the bar of his own conscience, if in doing so he has thought first of the good of the State entrusted to his care.' On this basis, what evil cannot be justified?

In the end, it seems, the most that can be said is that we are involved in 'a tragic process, a continuously repeated combat against insuperable forces of destiny.' Thus somehow responsibility escapes through the sieve, exactly as it escaped through the sieve in The German Catastrophe. The notion that men are involved, that decisions are human decisions made by moral agents, is lost. The conception of 'necessity of State,' as used by Meinecke, is either an alibi or a dan- gerous and misleading metaphor. And yet this difficult, unsatisfying book, so diffuse and ill- organised, was worth translating. Its contents today seem remote and academic, and Meinecke's weary arguments, his meticulous demonstration that things are more complicated than they seem, are already beginning to exude the musty smell of the obscure sixteenth-century pamphlets he exhumed in order to dissect. But his book remains valuable because it documents so characteristically a decisive phase in German thought. Here, as Dr. Stark observes in his able introduction, we touch 'upon one of the deeper explanations of how and why the nation of poets and philosophers could become a nation of square-bashers and swashbucklers.' Does this remain true today? It is a question we cannot afford to ignore. But who would dare to answer it with confidence?