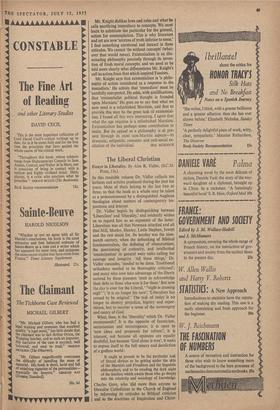 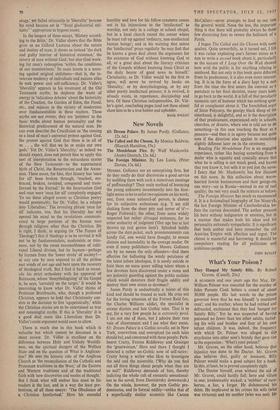 IN this readable volume Dr. Vidler collects ten lectures and articles produced during the past ten years. Most of them belong to the last two or three, so that the book as a whole may be taken as a pronouncement by a distinguished Anglican theologian about matters of contemporary im- portance and interest.

Dr. Vidler begins by distinguishing between `Liberalism' and 'liberality,' and evidently wishes us to regard him as an exponent of the latter. Liberalism was all that Newman attacked and all that Mill, Morley, Huxley, Leslie Stephen, Jowett and the rest stood for. Its heyday was the nine- teenth century, when the debunking of Biblical fundamentalism, the deflating of obscurantism, the questioning of authority, and intellectual `emancipation' in general were tasks calling for courage and integrity. 'All these things,' Dr. Vidler concedes, 'needed to be done. Traditional orthodoxy needed to be thoroughly criticised'; and many who now take advantage of the liberty secured by these pioneers 'omit to acknowledge their debt to those who won it for them.' But now the day is over for the Liberal, "night is drawing nigh" '; 'it is no longer his turn'; 'Liberalism has ceased to be original.' The task of today is no longer to destroy prejudice, bigotry and super- stition, but to recover a sense of the sovereignty and mercy of God.

What, then, is the 'liberality' which Dr. Vidler recommends? It is the opposite of fanaticism, sectarianism and intransigence; it is open to 'new ideas and proposals for reform'; it is tolerant, not because all opinions are equally doubtful, but because 'God alone is true'; it seeks to expose itself to the full misery and dereliction of a godless world :

It ought at present to be the particular task of liberal divines to be getting under the skin of the Marxists and Freudians and the linguistic philosophers, and to be treading the dark night of the intellect which awaits those who go deeply into the relativity and sociology of knowledge.

Charles Gore, who 'did more than anyone to liberalise Catholicism in the Church of England by reforming its attitudes to Biblical criticism and to the doctrines of Inspiration and Christ-

ology,' yet failed ultimately in 'liberality' because his mind became set in "fixed gladiatorial atti- tudes" ' appropriate to bygone issues.

In the longest of these essays, 'History accord- ing to the Bible,' Dr. Vidler shows that the Bible gives us no Gifford Lectures about the nature and destiny of man; it shows us instead 'the dark and guilty interior of historical existence,' the misery of man without God; but also God work- ing for man's redemption 'within the conditions of our transitoriness.' Its main lesson is a warn- ing against original sinfulness—that is, the in- veterate tendency of individuals and nations alike to seek power and self-sufficiency. Dr. Vidler's 'liberality' appears in his treatment of the Old Testament myths; he deplores the waste of energy in 'ridiculous debates' about the historicity of the Creation, the Garden of Eden, the Flood, etc., and rejoices in the victory of modernists over fundamentalists in these matters. These myths are not events; they are 'pointers' to the basic truths about human personality and the historical predicament of the natural man. He can even describe the Crucifixion as 'the coming to a head of man's universal protest against God, the protest against God that there is in all of us . . ., the will that we be or make our own gods.' Yet Dr. Vidler's 'liberality,' as indeed we should expect, does not permit him to apply this sort of interpretation to the miraculous stories of the New Testament—to the supernatural birth of Christ, the Resurrection and the Ascen- sion. These mean, for him, that history has 'once for all' been broken through, 'touched, em- braced, broken, ravished, conquered and trans- formed by the Eternal.' In the Incarnation God and man were 'once for all' completely engaged. To see these alleged events as Christian poetry would presumably, for Dr. Vidler, be a relapse into 'Liberalism.' The revealing phrase 'once for all' indicates, too, that his liberality has not opened his mind to the revelations communi- cated to large portions of the human race through religions other than the Christian. He is right, I think, in arguing (in 'The Future of Theology') that if theology is to be revived it will not be by fundamentalists, modernists or trim- mers, nor by the sweet reasonableness of culti- vated Liberal divines, but by laymen—perhaps by laymen from the 'lower strata' of society?— at any rate by men exposed to all the pitiless east winds of our age and bent upon the recovery of theological truth. But I find it hard to recon- cile his strict orthodoxy with his approval of Bultmann, whose 'demythologising' of the Gospel is, he says, 'certainly on the target.' It would be interesting to know what Dr. Vidler thinks of Professor Braithwaite, who, though a professed Christian, appears to hold that Christianity con- sists in the decision to live 'agapeistically,' while the Christian stories are to be entertained as true and meaningful myths. If this is 'liberality' it is a good deal more like Liberalism than Dr. Vidler's main argument would seem to allow.

There is much else in this book which is valuable but which cannot be discussed in a short review. Dr. Vidler is excellent on the difference between Holy and Unholy Worldli- ness, on the spiritual dangers of the Welfare State and on the question of What is Anglican- ism? He sees the historic role of the Anglican Church as 'the reconciliation of the Catholic and Protestant traditions in the West,' of the Eastern and Western traditions and of the traditional faith with 'new discoveries and modes of thought.' But I think what will endear him most to his readers is the last, and in a way the least pre- tentious, of all these essays: 'The Obedience of a Christian Intellectual.' Here his essential humility and love for his fellow-creatures comes out in his injunctions to the 'intellectual' to worship, not only in a college or school chapel, but in a local church round the corner where he must rub up against 'ordinary, non-intellectual human beings'; and in his warning that unless the 'intellectual' prays regularly 'he may find that he knows a great deal about the arguments for the existence of God without knowing God at all, or a great deal about the literary criticism of the Gospels without knowing Jesus Christ as the daily bearer of good news to himself.' Christianity, as Dr. Vidler would be the first to agree, will never be revived by books on `liberality,' or by demythologising, or by any other purely intellectual process; it is revived, it already exists, in repentance, discipleship and love. Of these Christian indispensables, Dr. Vid- ler's quiet, concluding pages (and not these alone) show him to be a true holder and upholder.