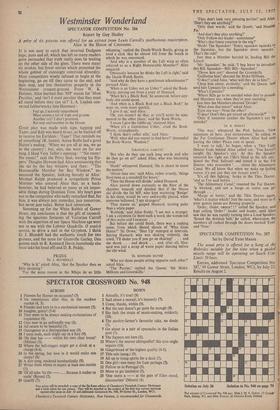 A prize of six guineas was offered for an extract from Lewis Carroll's posthumous masterpiece, Alice in the House of Commons.

IT is not easy to catch that inverted Dodgson logic, puns and all, which has left so many readers quite persuaded that truth really does lie waiting on the other side of the glass. There were many sly strokes, but fewer entries which presented the whole gobbet of cunningly contrived absurdity. Most competitors wisely refused to begin at the beginning, go on till they came to the end, and then stop, and lost themselves properly in the Westminster croquet-ground. From W. K. Holmes, Alice learned that 'MP' stands for. 'Most Peculiar,' and 'isn't it most peculiar that they must all stand before they can sit?' J. A. Lindon con- verted Jabberwocky into Hanseasy : Fed up, I scarcely umprehend What soums a lot of tripe and grouse. Another cut? I don't prattend, But nop and snoober in the House.

Great play was made with tape, tapping and Taper, and Rab was heard to say, as he hurried off to receive his Earldom : 'Tape? That reminds me of something' (R. James). Aurea Rolfe had a good Hatter's ending : 'When we are all at sea, we go to the country'; but, alas, she went on far too long. 4 liked Vera Telfer's opening: "No room! No room!" said the Privy Seal, waving his flip- pers.' Douglas Hawson had Alice announcing that she sat by the bay window, and then : "'The Honourable Member for Bay Window," an- nounced the Speaker, looking fiercely at Alice.' Michael Ralph produced a sympathetic Prime Minister who assured Alice that, as a back- bencher, he had believed as many as six impos- sible things during Question Time. My heart goes out to the competitor who sadly remarked that, for him, it was always jam yesterday, jam tomorrow, but never jam today. Better luck tomorrow.

Summing up for the White Rabbit of Gower Street, my conclusion is that the gift of reconcil- ing the spacious fantasies of Victorian Carroll with the asperities of our Space Machine age went out to sea with the Lobster Quadrille. 0 seasick amnia, to drive a nail in the Gryphon. I think G. J. Blundell had the authentic touch for two guineas, and the same for Granville Garley. One guinea each to R. Kennard Davis (somebody else must take his head off) and D. R. Peddy.

'Why is it,' asked Alice, 'that the Speaker does so little speaking?'

'For the same reason as the Whips do so little whipping,' replied the Death-Watch Beetle, giving so loud a click that he almost fell from the bench in which he was ensconced.

'And why is a member of the Left wing so often referred to as a Right Honourable Member?' Alice enquired. 'Obviously because he thinks the Left is right,' said the Death-Watch Beetle.

'And why do they have a gentleman schoolmaster?' pursued Alice. 'When is an Usher not an Usher?' asked the Book- Worm, peering out from a copy of Hansard.

'When he's a Black Rod,' he answered, before any- body else could speak.

'And when is a Black Rod not a Black Rod?' he went on, even more quickly.

'Oh, you mustn't do that, or you'll never be sum- moned to the other place,' said the Book-Worm. '1 mean I give the riddle up,' rejoined Alice.

`When it's a Gentleman Usher,' cried the Book- Worm, triumphantly.

'Well, what did you expect to find here?' demanded the Book-Worm. 'Wisdom?'

'But why do they use such long words and why do they go on so?' asked Alice, who was becoming bored.

'Hush!' whispered Hansard, 'He is about to move the motion.'

'About time too,' said Alice, rather crossly, 'things have been at a standstill for hours.'

'Then the House will divide,' added Hansard.

Alice peered down curiously at the floor of the chamber beneath and decided that if the House did divide the fat MP, who kept muttering 'Resign' in his sleep, would be very awkwardly placed, when someone bellowed, 'I spy strangers!'

'That means us,' gasped Hansard, turning paler than a white paper.

'Rubbish,' said Alice firmly. 'I am NOT a stranger. I am a citizeness (is there such a word, she wondered) of this realm and I DEMAND . .

But before she could finish, there was a rushing noise, from which dismal shouts of 'Who Goes Home?' Sit Down,' Shut Up' emerged at intervals. Seizing Hansard, who was shaking violently, she cried, shake you if you go on shaking!' . . . and she shook . . . and shook . . . and, after all, Han- sard was just a scrap of waste paper dancing before the idle wind.

`Who are those people sitting opposite each other?' asked Alice.

The Parties,' replied the Queen; 'the Make- Millions and Greatskills.' 'They don't look very amusing parties!' said Alice. 'Don't they eat anything?' ■ 'Only their words,' said the Queen; 'and Humble Pie.'

'And don't they play anything?' 'Only Follow-my-leader-sometimes!'

Just then a Member hurried in, leading Bill the Lizard.

`Mr. Squeaker,' he said, 'I beg leave to introduce this Bill. Squeaker-Bill: Bill-Squeaker.'

'Throw him out!' shouted the Greatskills.

`Guillotine him!' shouted the Make-Millions.

'0 dear!' cried Alice, 'what will they do to him?' 'Chop him about, probably,' said the Queen, 'and send him Upstairs for a mending.'

Just then the Members shouted 'Divide!'

'What does that mean?' asked Alice.

'Eyes one way-Nose the other!' '0 dear! Don't they get mixed up afterwards?'

`Only if someone catches the .Squeaker's eye by

(D. R. PEDDY) 'This way,' whispered the Pink Salmon. 'New statesmen sit here. And stateswomen,' he added, as the Fat Gentleman Doctor whom Alice had seen leaving the Other Plaice rose to speak. 'I want to talk,' he began, when a Thin Lady Doctor from behind Alice called out, 'You haven't caught the Speaker's eye.' At this the Speaker removed his right eye ('He's blind in the left one,, hissed the Pink Salmon) and tossed it to the Fat Doctor, who proceeded . about the Alimentary Canal. We all know that when we wake up feeling rotten, it's not just that our bowels aren't . .

`It's all this fighting,' broke in the Thin Doctor, 'and as I've said before . .

`The Alimentary Canal,' resumed the Fat Doctor, 'is blocked, and not a barge or cutter can get through . . 'Marge or butter,' said the Thin Doctor again, 'what's it matter which? Just the same, and more so if et your gastric juices are flowing properly . • .'

'Order, Order, ORDER! ! !' called the Speaker, and kept calling 'Order!' louder and louder, until Alice saw that he was rapidly turning into a Loud Speaker. 'Sound the division bell,' he called, whereupon the, members all rushed through the doors marked 'Eyes' and 'Nose.'