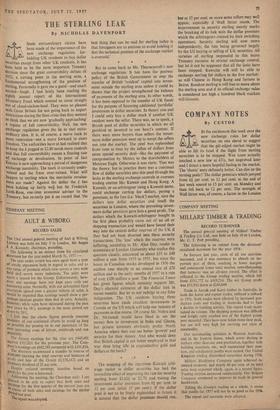 SOME extraordinary claims have been made of the importance of the new exchange regulation for- bidding UK residents to buy dollar securities except from other UK residents. It has been held to be the most important Treasury decision since the great convertibility debate of 1952, a turning point in the sterling area, a fundamental strengthening of the position of sterling. Personally it gave me a good—and much needed—laugh. I had lately been reading the eighth annual report of the International Monetary Fund which seemed to come straight out of cloud-cuckoo-land. They were so pleased 'with Great Britain for not going back to import restrictions during the Suez crisis that they seemed to think that we are now 'gradually approaching' a regime of full convertibility. Well, the new exchange regulation gives the lie to that extra- ordinary idea. It is, of course, a move back to more restriction—not a move forward to more freedom. The authorities have at last realised that to keep the £ pegged at $2.80 needs more controls and that full convertibility means a floating rate of exchange or devaluation. In point of fact Europe is now approaching a period of dangerous exchange instability. The mark is seriously under- valued and the franc over-valued. What will happen to sterling when the inevitable revalua- tions are made? Against the dollar the £ has been holding up fairly well but Sir Frederick Leith-Ross, one-time economic adviser to the Treasury, has recently put it on record that 'the

best thing that can be said for sterling today is that foreigners are so anxious to avoid holding it that the technical position of the exchange market is oversold.'

But to come back to Mr. Thorneycroft's new exchange regulation. It has been the postwar policy of the British Government to step the transfer of British 'resident' capital into invest- ment outside the sterling area unless it could be shown that the project strengthened the balance of payments of the sterling area. In other words, it has been opposed to the transfer of UK funds for the purpose of financing additional 'portfolio' investment in dollar securities. In theory you and I could only buy a dollar stock if another UK resident were the seller. There was, so to speak, a British pool of dollar securities in which we all gambled or invested to our heart's content. If there were more buyers than sellers the invest- ment dollar premium went up to tempt the sellers out into the market. The pool was replenished from time to time by the influx of dollars from some special.security deal—like the payment of compensation by Mexico to the shareholders of Mexican Eagle. Otherwise it was static. That was the theory, but in practice there was a continual flow of dollar securities into this pool through the leaks in the sterling exchange controls in overseas trading centres like Kuwait and Hong Kong. A Kuwaiti, or an arbitrageur using a Kuwaiti name, could exchange sterling for dollars, paying a premium, in the free (i.e. 'black') market, turn the dollars into dollar securities and resell the securities in London, where the prevailing invest- ment dollar premium gave him a good profit. The dollars which the Kuwaiti-arbitrageur bought in the first place probably came out of an oil or shipping transaction and would have found their way into the central dollar reserves of the UK if they had not been diverted into these security transactions. The 'loss' which the reserves were suffering, according to Mr. Alan Day, reader in economics at London University who studies this question closely, amounted to about £35 to £40 million a year from 1953 to 1955, but since the boom in Canadian stocks developed in 1956 the outflow rose sharply to an annual rate of £70 million and in the early months of 1957 to a rate of over £100 million a year. The Financial Times has given figures which certainly support Mr. Day's alarmist estimates of the dollar leak in recent months. But let us not indulge in any false indignation. The UK residents buying these securities have made excellent investments in Canada or the US which will help our balance of payments in due course. Of course Mr. Nehru and Dr. Nkrumah would have liked to see the money flow to investment in India and Ghana, but private investors obviously prefer North America where they can see better 'growth' and security for their money. And who would deny that British capital is not better employed in that way than lying idle in unproductive gold and dollars at the bank?

The stopping of the ingenious Kuwaiti arbi- trage racket in dollar securities has had the immediate effect of improving the rate for security sterling from 52.62} to $2.70 and raising the investment dollar premium from 6} per cent. to 12 per cent. (after 15 per cent.). If the dollar pool is not to be freely replenished in future it is natural that the dollar premium should rise,

but at 12 per cent. or more some sellers may well appear, especially if Wall Street reacts. The improvement in security sterling merely marks the breaking of its link with the dollar premium which the arbitrageurs created by their switching operations. Security sterling will now move independently, the rate being governed largely by the US buying or selling of UK securities. All varieties of sterling responded to this brave Treasury recourse to stricter exchange control, but let it not be supposed that all the leaks have been stopped. KuwaitiS will still be able to exchange sterling for dollars in the free market: so will Chinese in Hong Kong and Syrians in Beirut. Resident sterling is still free to move about the sterling area and if its official exchange value is considered too high a hundred black markets will blossom.