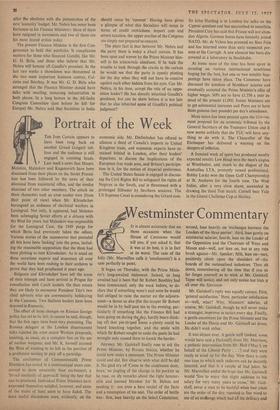 THE Iron Curtain appears to have been rung back on another Grand Guignol tab- leau and the audience is still ium has been followed by the news of their dismissal from ministerial office, and the similar dismissal of two other members. The attack on these characters took an even nastier turn (from their point of view) when Mr. Khrushchev harangued an audience of electrical workers in Leningrad. Not 'only, it appeared, had Molotov been sabotaging Soviet efforts at a detente with the West for years, but Malenkov was responsible for the Leningrad Case, the 1949 purge for which' Beria had previously taken the odium. Various stories of the manoeuvres that preceded all this have been 'leaking' into the press, includ- ing the reasonable supposition that the three had been plotting to oust Khrushchev. As is usual on these occasions experts and statesmen all over the world have been rushing to their archives to prove that they had prophesied it years ago.

Bulganin and Khrushchev have left the scene of their triumph and have arrived in Prague for consultation with Czech leaders. On their return they are likely to encounter President Tito's two chief advisers who are conveniently holidaying in the Caucasus. Two Stalinist leaders have been deposed in Rumania.

The effect of these changes on Russian foreign policy has yet to be felt; it cannot be said, though, that the first signs have been very promising. The Russian delegate at the London disarmament talks rejected the most recent Western proposals, insisting, as usual, on a complete ban on the use of nuclear weapons; and Mr. K. himself accused the West of wanting to be left in the position of a gentleman waiting to pick off a partridge.

The conference of Commonwealth Prime Ministers has ended, in a communique more con- cerned to show unanimity than excitement, a 'broad similarity of approach' being the best that can be produced. Individual Prime Ministers have expressed themselves satisfied, however, and some of the stains of Suez seem to have faded. The most useful discussions were, evidently, on the economic side. Mr. Diefenbaker has offered to allocate a third of Canada's imports to United Kingdom trade, and economic experts have re- mained behind in London, after their leaders' departure, to discuss the implications of the European free trade area, and Britain's participa- tion in it, for the notion of Imperial preference.

The United States Senate is engaged in discuss- ing the Civil Rights Bill to safeguard the rights of Negroes in the South, and is threatened with a prolonged filibuster by Southern senators. The US Supreme Court is considering the Girard case. Sir John Harding is in London for talks on the Cyprus question:and has succumbed to tonsillitis.

President Coly has said that France will not aban- don Algeria. German forces have formally joined NATO. Mr. de Valera has pounced on Sinn Fein and has interned more than sixty suspected per- sons at the Curragh. A new element has been dis- covered at a laboratory in Stockholm.

At home most of the time has been spent in standing on various international touchlines hoping for the best, but one or two notable hap- penings have taken place. The Commons have discussed the question of Members' salaries and eventually accepted the Prime Minister's offer of higher wages. MPs are to have £1,750 a year in- stead of the present £1,000. Junior Ministers are to get substantial increases and Peers are to have three guineas (not pounds) per day's attendance.

More scorn has been poured upon the Gov"rn- ment proposal for an economic tribunal by the General Secretary of the Transport Union and it now seems unlikely that the TUC will have any- thing to do with it. The Chancellor of the Exchequer has delivered a warning on the dangers of inflation.

A frenzied week of sport has produced mostly expected results. Lew Hoad won the men's singles at Wimbledon, and, much to the disgust of the Australian LTA, promptly turned professional. Bobby Locke won the Open Golf Championship at St. Andrews for the fourth time. The West Indies, after a very close shave, succeeded in drawing the third Test match. Cornell beat Yale in the Grand Challenge Cup at Henley.