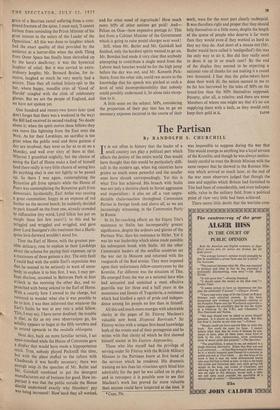 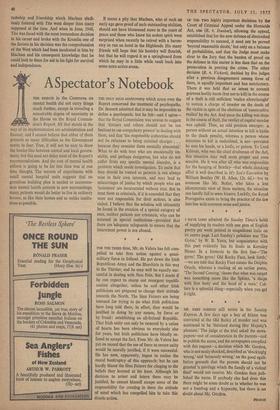 By RANDOLPH S. CHURCHILL T is not often in history that the leader of a I small country can play a political part which affects the destiny of the entire world. One would have thought that this would be particularly diffi- cult in the modern age, when big countries have grown so much more powerful and the smaller ones have shrunk correspondingly. Yet this is what Tito has achieved. His breach with Stalin was not only a decisive check to Soviet aggression and imperialism : it also set off .a vast unpre- dictable chain-reaction throughout Communist Parties in foreign lands and above all, as we are increasingly witnessing, in the Communist Party in Russia.

In its far-reaching effects on the future Tito's resistance to Stalin has incomparably greater significance, despite the ardours and glories of the Partisan War, than his resistance to Hitler. Yet it was his war leadership which alone made possible his subsequent break with Stalin. All the other Communist leaders of the satellite countries sat the war out in Moscow and returned with the vanguards of the Red armies. They were imposed upon their unfortunate fellow-countrymen by the Kremlin. Far different was the situation of Tito. He emerged from the war as a national hero who had animated and sustained a most effective guerrilla war for three and a half years in the mountains and forests of Yugoslavia, a resistance which had kindled a spirit of pride and indepen- dence among his people no less than in himself.

All this and much more emerges with admirable clarity in the pages of Sir Fitzroy Maclean's valuable new book Disputed Barricade.* Sir Fitzroy writes with a unique first-hand knowledge both of the events and of their protagonist and he writes with that clarity of which he first showed himself master in his Eastern Approaches.

Those who like myself had the privilege of serving under Sir Fitzroy with the British Military Mission to the Partisans know at first hand of the services which he rendered. His dramatic training no less than his vivacious spirit fitted him admirably for the part he was called on to play; and in retrospect it is possible now to see that Maclean's work has proved far more valuable than anyone could have suspected at the time. It • Cape, 25s. was impossible to suppose during the war that Tito would emerge as anything but a loyal servant of the Kremlin; and though he was always meticu- lously careful to treat the British Mission with the same respect that he showed to the Russian Mis- sion which arrived so much later, at the end of the war most observers judged that though the men and supplies which Britain had furnished to Tito had been of considerable, and even indispen- sable, value in the military field, from a political point of view very little had been achieved.

There seems little doubt that the wartime corn- radeship and friendship which Maclean studi- ously fostered with Tito went deeper than many supposed at the time. And when in June, 1948, Tito was faced with the most tremendous decision in his career and broke with the Kremlin one of the factors in his decision was the comprehension of the West which had been inculcated in him by Maclean and his consequent knowledge that he could look to them for aid in his fight for survival and independence. It seems a pity that Maclean, who at such an early age gave proof of such outstanding abilities, should not have blossomed more in the years of peace and those who know his ardent spirit were surprised when recently he retired with a baron- etcy to run an hotel in the Highlands. His many friends will hope that his hostelry will flourish, but that he will regard it as a springboard from which he may in a little while vault back into some more active arena.