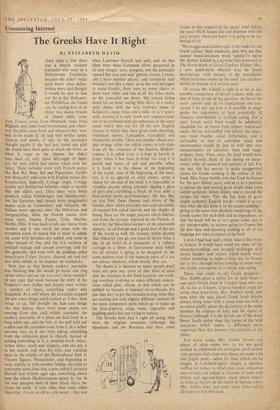 • The Greeks Have It Right

ONCE upon a time there was a female cookery journalist who went to a Delicatessen Exhibition because she didn't really quite know what delica- tessens were, and thought it would be nice to find out. So at this Delicates- sen Exhibition she found out, by tasting .first of all about two dozen brands of tinned pâté, some from France, some from Denmark, some from Belgium, and some from Switzerland, and where- ever the pâtés came from and whatever they were said to be made of, all had very similar tastes, textures and smells, if any, so the journalist thought maybe if she had, just, tasted One pâté She would have been quite as much the wiser, so When it came to the cheeses she didn't taste them all, only about fifty-eight of them, Just the ones. which had names which took her fancy. These included some with French names like Bon Bel, Baby Bel and Pipocreme, Sainflo and Minicabri; and some with English names like Krecmoched, Superstil, Cottage single, Cottage double and Bredspread (whether single or double that one didn't say). Then -there were Swiss Products called Schinkengru and Salamicreme, but the Germans had chosen More imaginative names such as Camembert and Gruyere, the Italians more operatic ones like Dolcerosa and Gorgonzolina, while the Danish names were more runic, Danbo, Fynbo, Tybo, Maribo, Norbo, Elbo. It was hard to tell one cheese from another and it was much the same with the seventeen kinds of tinned fish in brine or edible oil, some with harmless dye added, and some in tubes instead of tins, and the 114 varieties of cocktail sausage and canapé coverings, and fit- bits generally, and even with the pudding called deep-frozen Crepes Suzette, thawed out and cut into little shreds to be impaled on toothpicks.

Now just as that female cookery journalist Was thinking that shb would go home and ring up her editor and say she was sorry there wouldn't be any copy that week because the story of the Emperor's new clothes had already been written a number of times, something rather odd happened. At a stall where the journalist stopped she saw some things which looked as if they were things to eat. She thought she hatl seen things like that before, there were some smells too coming from that stall which reminded the cookery journalist of a place she had lived in a long while ago, and the lady at the stall held out a .plate and the journalist took from it, in a rather nervous way, as if she were taking something from the collection plate in church, instead of nutting something in it, a purplish-black object, rather shiny, small and slippery, and she put it in her mouth, and shut her eyes, and standing there in the middle of the Horticultural Hall in Vincent Square, Westminster, and beginning to sway slightly as with combat fatigue, she tried to remember some lines that a poet called Lawrence Durrell had written ages ago, something about how the whole Mediterranean seems to rise in the sour pungent taste of these black olives be- tween the teeth. 'A taste older than meat, older than wine. A taste as old as cold water —that was

what Lawrence Durrell had said, and on that plate were these Calamata olives preserved in oil and vinegar, sour, pungent, and the journalist opened her eyes and said `gimme s'more, I mean, can I have another please,' and somebody said wouldn't you like a chair, so as this stall belonged to some Greeks, there were as many chairs as there were tubes and tins at all the other stalls, so the journalist sat down. She stayed sitting down for an hour, eating little slices of a rocky, salty cheese with the very ordinary name of Kefalotiri, made from ewe's milk, or is it goat's milk, anyway it is milk, fresh and unpasteurised, not to be confused with the substance of the same name, which they use for all the new English cheeses to which they have given such charming, whimsical names, Lancashire, Caerphilly and Gloucester, double. There was another cheese too, that strange white one which comes in soft slabs from all the countries of the Eastern Mediter- ranean; it is called ktta; it is kept in barrels in brine; when it has been in brine too long it is horrid and tastes of salt and paraffin, when it is fresh it is the cheese of the beginning of the world—and of the beginning of the meal, too; it is an aperitif or mccze cheese, never a cheese for the end of the meal, it is impossible to visualise anyone sitting solemnly sipping a glass of port and crumbling a block of fora after a four-course 1110111 gastronomique. Ah, but they set you free, these cheeses and olives of the Greeks, their salted pistachio nuts and salt-cured, oil-steeped fish called lakerda and the chunks of bread, these are the magic potions which liberate you from the tyranny imposed by.the French, or was it by. the Swiss hotel-keepers of the nineteenth century, on all Europe and a good deal of the rest of the world as well, the tyranny which decrees that wherever you go you must sit down twice a day in an hotel or a restaurant or a railway carriage to a three- or four-course meal which for all eternity is going to be designed on the same pattern even if the separate parts of it are not always identical, which mostly they are.

No doubt it is because so many people don't want any part any more of that kind of meal that the chemists in the food factories are work- ing overtime evolving so many different concoc- tions called pâté, cheese, or fish which can be dabbed on biscuits or impaled on toothpicks. It's just that they've got the formula wrong, what they are making are only slightly different versions of the same component parts which go to make up the hors-d'oeuvre, soup, meat, vegetable and pudding meals they are trying to replace.

The Greeks have had it right all along, they were the original inventors (although the Spaniards and the Russians also have some claims in this respect) of the picnic meal before the meal which means you can dispense with the meal proper when you know it is going to be too boring to eat.

'No exaggerated claims ought to be made for the Greek cuisine' (holy mackerel, then why use that suspect travel-brochure word 'cuisine'?) warns Mr. Robert Liddell in a nervous little foreword to The Home Book of Greek Cookery (Faber, 18s.), a new publication wherein may be found descriptions, with recipes, of the mezethakia which in Greece make up the meal you can have before or instead of a serious meal.

Of course Mr. Liddell is right in so far as any possible comparison of Greek cookery with, say,

' that of Italy, is out of the question. As far as the yndze custom and all its implications are con- cerned I do not see how it is possible to exag- gerate the importance at least potentially of Greece's contribution to civilised eating. For a start, Greek nieze food would be admirably adaptable for air travel (and airport restaurant) meals. Olives, rice.-stuffed vine leaves, the minia- ture meat rissoles called kefrethakia, and a. cartonakia or two of aubergine salad and taramasalata would fit just as well into tray compartments as chemists' ham and stage- property buns. Then, since the fOOd. would have built-in flavour, think of the saving on teeny- weeny tubes of mustard and packets of salt. For the rest, the last person to make exaggerated claims for Greek cooking is the author of this book, Mrs. Joyce Stubbs, who has lived in Greece for the past fifteen years, and so is in a position to choose the best among good simple (and some subtle) authentic Greek dishes, and to record the recipes Lit them. This she has done in good simple authentic English words-'-which is to say that what she has done is by no means nothing-- giving at the same time phonetic renderings of the Greek names for each dish and its ingredients, so that the book' will be of very great value, not to say indispensable, to anyone going to Greece for the first time and knowing nothing at all of the language nor what to expect of the food.

I wish I had had such a book when I first went to Greece. It would have saved me many of the misunderstandings and enraged exchanges with tavern keepers and waiters which nearly every visitor intending to make a long stay in Greece has to live through before coming to terms with the Greek conception of cooking and eating.

Those who claim to sell Greek products— Mrs. Stubbs gives a useful list of such shops and serve Greek food in London (and who are all, so far as I know, Cypriot-Greeks) could do worse than learn from Mrs. Stubbs's book, and note what she says •about Greek lamb kebabs always being eaten with a salad (and not with a' so-called pilaff), about the distinction to be made between the origano of Italy and the rigani of Greece (although it is the Greek use of the dried flower heads rather than the leaves of the wild marjoram which makes a difference more important than that between two varieties or the plant).

For home cooks Mrs. Stubbs throws out plenty of ideas—sonic new to me are quail cooked in a hollowed-out aubergine, pork stewed with quinces, and a leek rand cheese pie made with that fragile pastry called tile (and which can be bought in London-Cypriot shops), a chestnut stain': for turkey to which pine, nuts, cinnamon. and currants are added, a• fricass& of lamb with lettuce and egg-and-lemon sauce which sounds as fresh as the air on the island of Spetsta, where Mrs. Saibbs lives, and cooks these dishes whi,:h all sound so real and good.