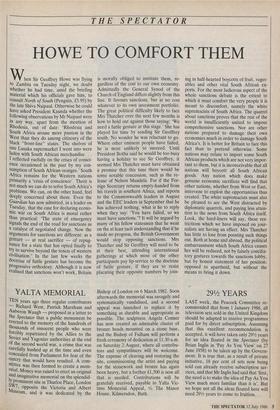 TEN years ago three regular contributors — Richard West, Patrick Marnham and Auberon Waugh — proposed in a letter to the Spectator that a public monument be erected to the memory of the hundreds of thousands of innocent people who were forcibly repatriated by the Allies to the Soviet and Yugoslav authorities at the end of the second world war, a crime that was carefully hushed up at the time and even concealed from Parliament for fear of the outcry that would have resulted. A com- mittee was then formed to create a mem- orial. Money was raised to erect an original and imaginative memorial on the splendid- ly prominent site in Thurloe Place, London SW7, opposite the Victoria and Albert Museum, and it was dedicated by the Bishop of London on 6 March 1982. Soon afterwards the memorial was savagely and systematically vandalised, and a second appeal was launched to replace it by something as durable and appropriate as possible. The sculptress Angela Conner has now created an admirable cluster of bronze heads mounted on a stone base, and the Bishop of Fulham will perform a fresh ceremony of dedication at 11.30 a.m. on Saturday 2 August, where all contribu- tors and sympathisers will be welcome. The expense of clearing and restoring the site, commissioning the artist and paying for the stonework and bronze has again been heavy, but a further £1,500 is now all that is needed. Contributions will be gratefuly received, payable to Yalta Vic- tims Memorial Appeal, C/0 The Manor House, Kilmersdon, Bath.