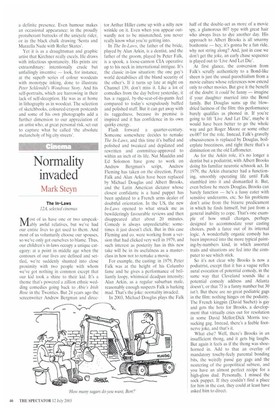 Most of us have one or two unspeakably awful relatives, but we've had our entire lives to get used to them. And most of us voluntarily choose our spouses, so we've only got ourselves to blame. Thus, our children's in-laws occupy a unique category: at a point in middle age when the contours of our lives are defined and settled, we're suddenly shunted into close proximity with two people with whom we've got nothing in common except that our kid took a shine to their kid. It's a theme that's powered a zillion ethnic wedding comedies going back to Abie's Irish Rose in the Twenties. But 24 years ago the screenwriter Andrew Bergman and direc

tor Arthur Hiller came up with a nifty new wrinkle on it. Even when you appear outwardly not to be mismatched, you never really know what you're getting into.

In The In-Laws, the father of the bride, played by Alan Arkin, is a dentist, and the father of the groom, played by Peter Falk, is a spook, a loose-cannon CIA operative up to his neck in international intrigue. It's the classic in-law situation: the one guy's world destabilises all the bland security of the other's. If it turns up late at night on Channel 139, don't miss it. Like a lot of comedies from the day before yesterday, it has a ragged, by-the-seat-of-its-pants feel compared to today's scrupulously buffed and polished stuff. But it can get away with its raggedness, because its premise is inspired and it has confidence in its own quirky energy.

Flash forward a quarter-century. Someone somewhere decides to remake The In-Laws, and this time it's buffed and polished and tweaked and depilated and rewritten and committee-approved to within an inch of its life. Nat Mauldin and Ed Solomon have gone to work on Andrew Bergman's script, Andrew Fleming has taken on the direction, Peter Falk and Alan Arkin have been replaced by Michael Douglas and Albert Brooks, and the Latin American dictator whose closest confidante is a hand puppet has been updated to a French arms dealer of doubtful orientation. In the US, the new In-Laws opened to what struck me as bewilderingly favourable reviews and then disappeared after about 20 minutes. Comedy is always unpredictable: sometimes it just doesn't click. But in this case Fleming and co. were working from a version that had clicked very well in 1979, and such interest as posterity has in this new take will be in its usefulness as a masterclass in how not to remake a movie.

For example, the casting: in 1979, Peter Falk was at the height of his Columbo fame and he gives a performance of brilliantly loopy, whimsical deadpan intensity; Alan Arkin, as a regular suburban male, reasonably enough suspects Falk is barking mad. That's the joke: normality invaded.

In 2003, Michael Douglas plays the Falk half of the double-act as more of a movie spy, a glamorous 007 type with great hair who always lives to dye another day. His approach to Albert Brooks is all smarmy bonhomie — hey, it's gonna be a fun ride, why not string along? And, just M case we don't get the joke, an early chase sequence is played out to 'Live And Let Die'.

At first glance, the conversion from Falk's scruffy authenticity to a Bond-like sheen is just the usual parochialism from a movie culture whose references now extend only to other movies. But give it the benefit of the doubt: it could be funny — imagine if your daughter married into the Bond family. But Douglas sums up the blowdried laziness of the film: this performance barely qualifies as phoned in. If you're going to lift 'Live And Let Die', maybe it would have been better to go the whole way and get Roger Moore or some other ex-007 for the role. Instead, Falk's gravelly obsessiveness is replaced by Douglas, boilerplate breeziness, and right there that's a diminution on the old Laffometer.

As for the Arkin role, it's no longer a dentist but a podiatrist, with Albert Brooks doing his familiar neurotic schnook act. In 1979, the Arkin character had a functioning, smoothly operating life until Falk stumbled into it and dismantled it. But, even before he meets Douglas, Brooks can barely function — he's a fussy eater with sensitive underarms, etc. So his problems don't arise from the bizarre predicament in which he finds himself, but just from a general inability to cope. That's one example of how small changes, perhaps designed to accommodate your casting choices, push a farce out of its internal logic. A wonderfully organic comedy has been improved into the more typical painting-by-numbers kind, in which assorted traits and situations are fed into the computer to see which stick.

So it's not clear why Brooks is now a podiatrist, except that it has a vague reflex aural evocation of potential comedy, in the same way that Cleveland sounds like a potential comedy address and Atlanta doesn't, or that 73 is a funny number but 30 isn't. But there are no great podiatric gags in the film: nothing hinges on the podiatry. The French kingpin (David Suchet) is gay and gets the hots for Brooks, a development that virtually cries out for resolution in some David Mellor/Dick Morris toesucking gag. Instead, there's a feeble footnerve joke, and that's it.

What else? Well, there's Brooks in an insufficient thong, and it gets big laughs. But again it feels as if the thong was shoehorned in. Add to that an overlay of mandatory touchy-feely parental bonding bits, the weirdly passé gay gags and the neutering of the geopolitical subtext, and you have an almost perfect recipe for a high-gloss dud. Personally. I missed the sock puppet. If they couldn't find a place for him in the cast, they could at least have asked him to direct.