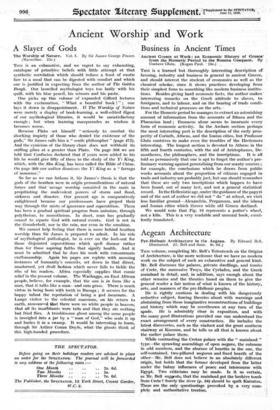 Ancient Greece at Work : an Economic History of Greece' from the Homeric Period to the Roman Conquest. By

THIS is a learned but thoroughly interesting description of farming, industry and business in general in ancient Greece, and should interest the student of economics as well as the classical scholar, since it shows practices developing from their simplest form to something like modern business institu- tions. Besides giving hard economic facts, the author makes' interesting remarks on the Greek attitude to slaves, to foreigners, and to labour, and on The bearing of trade condi- tions and technical processes on the arts. - For the Homeric period he manages to extract an astonishing amount of information from the accounts of Ithaca and the Phaeacian land ; Eumaeus alone seems to incarnate every form of economic activity. In the Archaic section perhaps the most interesting part is the description of the early pros- perity of Corinth, Athens, and the Ionian cities, but Professor Glotz contrives to make even the troubles of the Hectemors interesting. The longest section is devoted to Athens in the fifth and fourth centuries, with the aid of Aristophanes, De- • mosthenes, the philosophers, and the inscriptions. It is all told so persuasively that -one is apt to forget the author's pre- liminary warning against generalizing from our scanty sources ; for example, the conclusions which he draws from public works accounts about the proportion of citizens engaged in trade and industry are probably just, but one should remember that these are only two inscriptions which happen to have been round, out of many lost, and not a general statistical record. In the Hellenistic age, under the guidance of the papyri and of the sort of author we did not " do" at school, we visit less familiar ground—Alexandria, Pergamum, and the island and Ionian cities which throve while old Greece declined.

We would note that Fig.- 16 represents a potter's wheel, not a kiln. This is a very readable and unusual book, excel- lently translated.