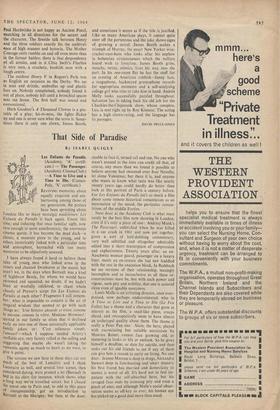 That Side of Paradise

Les Enfants du Paradis. (Academy, 'A' certifi- cate.) — The Passenger. (Academy Cinema Club.) —A Time to Live and a Time to Die. (Cameo- Poly, 'X' certificate.) on REVIVING memories about equally exquisite and em- barrassing among those of my generation, the posters have been sprouting about London like so many nostalgic madeleines: Les Enfants du Paradis is back again. Uncut this time,• and inducing that once familiar sight, now rare enough to seem anachronistic, the enormous cinema queue, it has become the dead duck—a classic, a museum piece to the young, and to others inextricably linked with a particular time and atmosphere, barnacled with too many memories to be objectively assessed.

I have always found it hard to believe those tales of young men who linked arms in the streets and chanted Swinburne at the moon; but uSen't we, in the days when Barrault was a kind of. highbrow Beatle, for whom we would have swooned and squealed, no doubt, if we hadn't been so woefully inhibited, to chant whole chunks of Prevert's script for Les Enfants du Paradis at each other? Fragments I still remem- ber: what is impossible to conjure is,the air of magical wisdom that seemed to go with such things as: 'Une histoire absuyde et triste, comme la tnienne, comme la witre, Madame Hermine!,' quoted in our family so often that it declined early on into one of those universally applicable family jokes; or: 'C'est tellenzent simple, l'anzotirl—which I suppose needed Arletty's Ineffable eye, very faintly rolled at the ceiling and suggesting that maybe she wasn't taking the romantic agony as much to heart as we were, to give it point.

The version we saw here in those days cut out Much of the best of Lemaitre and I think Lacenaire as well, and several love scenes, then Considered daring, were. pruned a bit (Barrault in bed in his shirt, for instance, which shows what a long way we've travelled since); but I chased the uncut one to Paris and, to add to this piece of oneupmanship, got an introduction to Barrault at the Marigny; but then, at the door,

unable to face it, turned tail and ran. No one who wasn't around at the time can credit all that, of course, any more than we found it possible to believe anyone had swooned over Ivor Novello, let alone Valentino; but there it is, and anyone who wants to know what taste was like nearly twenty years ago could hardly do better than look at this portrait of Paris a century before. For Les Enfants du Paradis isn't so much a film about some remote historical romanticism as an incarnation of the mood, the particular roman- ticism, of the middle Forties.

Next door at the Academy Club is what must surely be the best film now showing in London, even if it's only a piece of one: Andrzej Munk's The Passenger, unfinished when he was killed in a car crash in 1961 and now put together, given a sort of half-dubbing commentary, very well subtitled and altogether admirably edited into a short masterpiece of compression and explosiveness. Twenty years after, an ex- Auschwitz woman guard, passenger on a luxury liner, meets an ex-inmate she last saw huddled with the rest in the execution block. In flashback we see versions of their relationship, teasingly incomplete and as inconclusive as all these re- constructions must be, but with such power and vigour, such pity and nobility, that one is scoured clean even of ignoble noseyness.

Louis Malle is an irritating director, once over- praised, now perhaps underestimated, who in A Time to Live and a Time to Die (Le Feu Follet) has a theme and a character that grow in interest as the film, a snail-like piece, creeps ahead, and retrospectively seem to have almost an archetypal quality about them. The theme is really a Peter Pan one : Alain, the hero, played with excruciating but suitable narcissism by Maurice Ronet, cannot face growing old, or maturing in looks or life or outlook. So he gives himself a deadline, or date for suicide, and then seeks out his old friends to see if any of them can give him a reason to carry on living. No one does: Jeanne Moreau is deep in drugs, Alexandra Stewart deep in lion-hunting and smart dinners, his best friend has married and domesticity (it seems) is worst of all. It's hard not to feel im- patient with the self-absorbed hero, but his ravaged face ends by arousing pity and even a pinch of awe; and although Malle's social obser- vation seems as off-key as ever, his human eye has picked up a good deal more than usual.