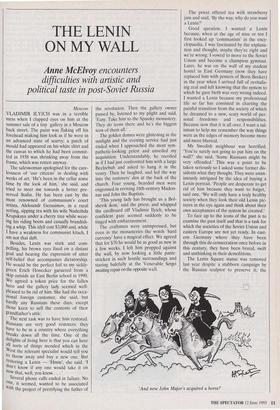 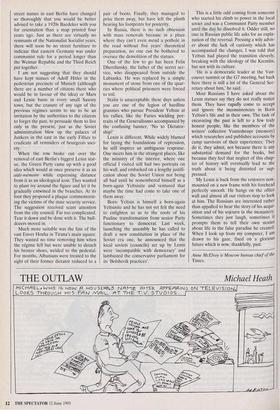 THE LENIN ON MY WALL

difficulties with artistic and political taste in post-Soviet Russia

Moscow VLADIMIR ILYICH was in a terrible mess when I clapped eyes on him at the summer sale of a tiny gallery in a Moscow back street. The paint was flaking off his forehead making him look as if he were in an advanced state of scurvy; a patch of mould had appeared on his white shirt and the canvas to which he had been commit- ted in 1938 was shrinking away from the frame, which was rotten anyway.

The saleswoman apologised for the care- lessness of 'our citizens' in dealing with works of art. 'He's been in the cellar some time by the look of him,' she said, and tried to steer me towards a better pre- served Stalin. He has been cast by the most renowned of communism's court artists, Aleksandr Gerasimov, in a rural setting, sipping tea with his wife Nadezhda Krupskaya under a cherry tree while wear- ing his riding boots and casually brandish- ing a whip. This idyll cost $3,000 and, while I have a weakness for communist kitsch, I am not that daft.

Besides, Lenin was stark and com- pelling, his brown eyes fixed on a distant goal and bearing the expression of utter self-belief that accompanies dictatorship. lie would be the perfect foil to my sickly- green Erich Honecker garnered from a skip outside an East Berlin school in 1990. We agreed a token price for the fallen hero and the gallery lady seemed well- Pleased to be rid of him. She had the occa- sional foreign customer, she said, but hardly any Russians these days, except those keen to sell the contents of their grandfather's attic.

The next task was to have him restored. Russians are very good restorers: they have to be in a country where everything breaks down all the time. One of the delights of living here is that you can have all sorts of things mended which in the West the relevant specialist would tell you to throw away and buy a new one. But

restoring a Lenin she said, 'I don't know if any one would take it on

now that, well, you know . ' Several phone calls ended in failure. No e, it seemed, wanted to be associated with the project of prettifying the father of the revolution. Then the gallery owner passed by, listened to my plight and said, `Easy. Take him to the Spassky monastery. They do icons there and he's the biggest icon of them all.'

The golden domes were glistening in the sunlight and the evening service had just ended when I approached the most sym- pathetic-looking priest and unveiled my acquisition. Understandably, he recoiled as if I had just confronted him with a large Beelzebub and asked to hang it in the vestry. Then he laughed, and led the way into the restorers' den at the back of the church. Four young, bearded men were engrossed in reviving 16th-century Madon- nas and John the Baptists.

`This young lady has brought us a Bol- shevik ikon,' said the priest, and whipped the cardboard off Vladimir Ilyich, whose confident gaze seemed suddenly to be tinged with embarrassment. The craftsmen were unimpressed, but even in the monasteries the words 'hard currency' have a magical effect. We agreed that for $70 he would be as good as new in a few weeks. I left him propped against the wall, by now looking a little panic- stricken in such hostile surroundings and staring balefully at the Venerable Sergei awaiting repair on the opposite wall. The priest offered tea with strawberry jam and said, 'By the way, why do you want a Lenin?'

Good question. I wanted a Lenin because, when at the age of nine or ten I first looked up 'communism' in the ency- clopaedia, I was fascinated by the explana- tion and thought, maybe they're right and we're wrong. I vowed to move to the Soviet Union and become a champion gymnast. Later, he was on the wall of my student hostel in East Germany (now they have replaced him with posters of Boris Becker) in the year when I arrived full of revitalis- ing zeal and left knowing that the system to which he gave birth was very wrong indeed. I wanted a Lenin because my professional life so far has consisted in charting the painful transition from the society of which he dreamed to a new, scary world of per- sonal freedoms and responsibilities. Because now that it is all over, I want a tal- isman to help me remember the way things were as the edges of memory become more and more blurred.

My Swedish neighbour was horrified. `You're surely not going to put him on the wall?' she said. 'Some Russians might be very offended.' This was a point to be taken seriously so I asked some former dis- sidents what they thought. They were unan- imously intrigued by the idea of buying a Lenin portrait. 'People are desperate to get rid of him because they want to forget,' said one. 'We will only have a truly healthy society when they look their old Lenin pic- tures in the eye again and think about their own acceptances of the system he created.'

To face up to the icons of the past is to examine the past itself and that is a task for which the societies of the Soviet Union and eastern Europe are not yet ready. In east- ern Germany where they have been through this de-consecration once before in this century, they have been brutal, swift and unthinking in their demolitions.

The Lenin Square statue was removed last year despite a stubborn campaign by the Russian sculptor to preserve it; the And now John Major's acquired a horse!' street names in east Berlin have changed so thoroughly that you would be better advised to take a 1920s Baedeker with you for orientation than a map printed four years ago. Just as there are virtually no remnants of the Nationalist Socialist years, there will soon be no street furniture to indicate that eastern Germany was under communist rule for a period longer than the Weimar Republic and the Third Reich put together.

I am not suggesting that they should have kept statues of Adolf Hitler in the pedestrian precincts of Munich (although there are a number of citizens there who would be in favour of the idea) or Marx and Lenin busts in every small Saxony town, but the erasure of any sign of the previous regimes seems to me to be an invitation by the authorities to the citizens to forget the past, to persuade them to live only in the present, just as the Soviet administration blew up the palaces of Junkers in the east in the early Fifties to eradicate all reminders of bourgeois soci- ety.

When the row broke out over the removal of east Berlin's biggest Lenin stat- ue, the Green Party came up with a good idea which would at once preserve it as an aide-tnemoire while expressing distance from it as an ideological icon. They wanted to plant ivy around the figure and let it be gradually entwined in the branches. At its foot they proposed a plaque commemorat- ing the victims of the state security service. The suggestion received scant attention from the city council. Far too complicated. Tear it down and be done with it. The bull- dozers moved in.

Much more suitable was the fate of the vast Enver Hoxha in Tirana's main square. They wasted no time removing him when the regime fell but were unable to detach his bronze shoes, welded to the pedestal. For months, Albanians were treated to the sight of their former dictator reduced to a pair of boots. Finally, they managed to prise them away, but have left the plinth bearing his footprints for posterity.

In Russia, there is no such obsession with mass removals because in a place where they can't even mend a pothole in the road without five years' theoretical preparation, no one can be bothered to oversee the demolition of the statues.

One of the few to go has been Felix Dherzhinsky, the father of the secret ser- vice, who disappeared from outside the Lubianka. He was replaced by a simple monument of stone from one of the quar- ries where political prisoners were forced to toil.

Stalin is unacceptable these days unless you are one of the legion of hardline grannies who pursue President Yeltsin at his rallies, like the Furies wielding por- traits of the Generalissmo accompanied by the confusing banner, 'No to Dictator- ship!'

Lenin is different. While widely blamed for laying the foundations of repression, he still inspires an ambiguous response. One meets him in the strangest places, like the ministry of the interior, where one official I visited still had two portraits on his wall, and embarked on a lengthy justifi- cation about the Soviet Union not being all bad until he remembered himself as a born-again Yeltsinite and ventured that maybe the time had come to take one of them away.

Boris Yeltsin is himself a born-again Yeltsinite and he has not yet felt the need to enlighten us as to the roots of his Pauline transformation from senior Party functionary to democrat. Last week, launching the assembly he has called to draft a new constitution in place of the Soviet era one, he announced that the local soviets (councils) set up by Lenin were 'incompatible with democracy' and lambasted the conservative parliament for its 'Bolshevik practices'. This is a little odd coming from someone who started his climb to power in the local soviet and was a Communist Party member until the day he dissolved it. Odder still, no one in Russian public life asks for an expla- nation of the reversal. Pressing a wily advis- er about the lack of curiosity which has accompanied the changes, I was told that Yeltsin had played the transition cleverly, breaking with the ideology of the Kremlin, but not with its culture.

'He is a democratic leader at the Van- couver summit or the G7 meeting, but back here there is still a lot of the General Sec- retary about him,' he said.

Most Russians I have asked about the Lenin statues say they do not really notice them. They have rapidly come to accept and ignore the inconsistencies in Boris Yeltsin's life and in their own. The task of excavating the past is left to a few truly honest people, like the members of the writers' collective Vozreshenye (memory) which researches and publishes accounts by camp survivors of their experiences: They do it, they admit, not because there is any substantial demand for the books, but because they feel that neglect of this chap- ter of history will eventually lead to the truth about it being distorted or sup- pressed.

My Lenin is back from the restorers now, mounted on a new frame with his forehead perfectly smooth. He hangs on the office wall and almost all our visitors stop to look at him. The Russians are interested rather than appalled to hear the story of his acqui- sition and of his sojourn in the monastery. Sometimes they just laugh, sometimes it prompts them to tell their own stories about life in the false paradise he created. When I look up from my computer, I 01 drawn to his gaze, fixed on a glorious future which is now, thankfully, past.

Anne McElvoy is Moscow bureau chief of the Times.