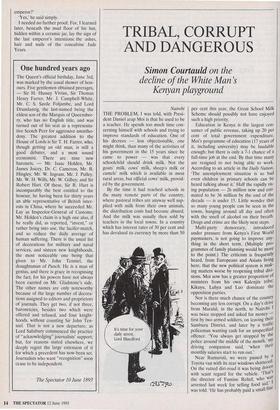 The Queen's official birthday, June 3rd, was marked by the usual shower of hon- ours. Five gentlemen obtained peerages, — Sir H. Hussey Vivian, Sir Thomas Henry Farrer, Mr. J. Campbell-White, Mr. C. S. Savile Foljambe, and Lord Drumlan rig, the last-named being the eldest son of the Marquis of Queensber- ry, who has no English title, and was turned out of his seat as a representa- tive Scotch Peer for aggressive unortho- doxy. The greatest addition to the House of Lords is Sir T. H. Farrer, who, though getting an old man, is still a good debater, and a most sound economist. There are nine new baronets, — Mr. Isaac Holden, Mr. James Joicey, Dr. C. Cameron, Mr. B. Hingley, Mr. W. Ingram, Mr. J. Pulley, Mr. W. H. Wills, Mr. W. Gilbey, and Sir Robert Hart. Of these, Sir R. Hart is incomparably the best entitled to the honour, he having been for thirty years an able representative of British inter- ests in China, where he succeeded Mr. Lay as Inspector-General of Customs; Mr. Holden's claim is a high one also, if he really did, as reported, "invent," or rather bring into use, the lucifer-match, and so reduce the daily average of human suffering. There is the usual list of decorations for military and naval services, and sixteen new knighthoods, the most noticeable one being that given to Mr. John Tenniel, the draughtsman of Punch. He is a man of genius, and there is grace in recognising the fact, for his powers have not always been exerted on Mr. Gladstone's side. The other names are only noteworthy because of the large number of decora- tions assigned to editors and proprietors of journals. They get two, if not three, baronetcies, besides two which were offered and refused, and four knight- hoods, without counting Sir John Ten- niel. That is not a new departure, as Lord Salisbury commenced the practice of "acknowledging" journalists' support; but, for reasons stated elsewhere, we deeply regret the large extension of it for which a precedent has now been set. Journalists who want "recognition" soon cease to be independent.