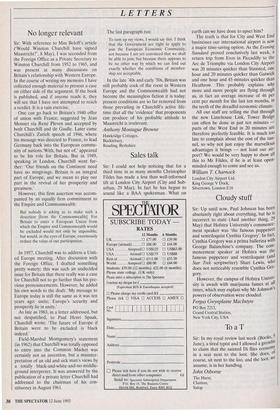 Sir: With reference to Max Beloffs article (`Would Winston Churchill have signed Maastricht?', 8 May), I was seconded from the Foreign Office as a Private Secretary to Winston Churchill from 1952 to 1965, and was present at many discussions on Britain's relationship with Western Europe. In the course of writing my memoirs I have collected enough material to present a case on either side of the argument. If the book is published, and if anyone reads it, they will see that I have not attempted to reach a verdict. It is a vain exercise.

One can go back to Britain's 1940 offer of union with France, suggested by Jean Monnet via Rene Pleven and accepted by both Churchill and de Gaulle. Later came Churchill's Zurich speech of 1946, where his message was directed to France, to lead Germany back into the European commu- nity of nations.`With, but not of,' appeared to be his role for Britain. But in 1949, speaking in London, Churchill went fur- ther: 'Our friends on the Continent need have no misgivings. Britain is an integral part of Europe, and we mean to play our part in the revival of her prosperity and greatness.'

However, this firm assertion was accom- panied by an equally firm commitment to the Empire and Commonwealth:

But nobody is asking us to make such a desertion [from the Commonwealth]. For Britain to enter a European Union from which the Empire and Commonwealth would be excluded would not only be impossible. but would, in the eyes of Europe, enormously reduce the value of our participation.

In 1957, Churchill was to address a Unit- ed Europe meeting. After discussion with the Foreign Office, I drafted something pretty watery; this was such an undecided issue for Britain that there really was a case for Churchill not to go further than his pre- vious pronouncements. However, he added his own words to the draft: 'My message to Europe today is still the same as it was ten years ago: unite; Europe's security and prosperity lie in unity.'

As late as 1963, in a letter addressed, but not despatched, to Paul Henri Spaak, Churchill wrote: 'The future of Europe if Britain were to be excluded is black indeed.'

Field-Marshal Montgomery's statement (in 1962) that Churchill was totally opposed to entry into the Common Market was certainly not an invention, but a misinter- pretation of an old and sick man's views by a totally black-and-white-and-no-middle- ground interpreter. It was answered by the publication of a private letter Churchill had addressed to the chairman of his con- stituency in August 1961. The last paragraph ran:

To sum up my views, I would say this: I think that the Government are right to apply to join the European Economic Community, not because I am yet convinced that we shall be able to join, but because there appears to be no other way by which we can find out exactly whether the conditions of member- ship are acceptable.

In the late '40s and early '50s, Britain was still probably cock of the roost in Western Europe and the Commonwealth had not become the meaningless fiction it is today: present conditions are so far removed from those prevailing in Churchill's active life- time that all the 'evidence' that proponents can produce of his probable attitude to Maastricht is irrelevant.