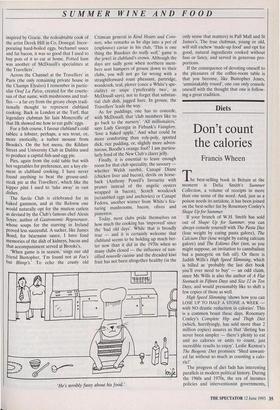 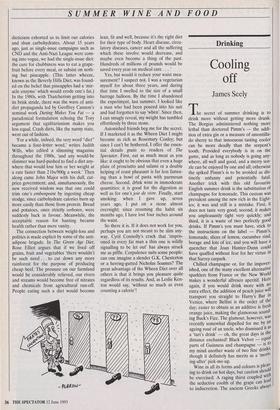 The best-selling book in Britain at the moment is Delia Smith's Summer Collection, a volume of receipts in more than one sense of the word. And, just as a poison needs its antidote, it has been joined on the best-seller list by Rosemary Conley's Shape Up for Summer.

If your branch of W.H. Smith has sold out of Shape Up for Summer, you can always console yourself with The Pasta Diet (lose weight by eating pasta galore), The Calcium Diet (lose weight by eating calcium galore) and The Eskimo Diet (not, as you might suppose, an invitation to cannibalism but a panegyric on fish oil). Or there is Judith Wills's High Speed Slimming, which is billed as 'probably the last diet book you'll ever need to buy' — an odd claim, since Ms Wills is also the author of A Flat Stomach in Fifteen Days and Size 12 in Ten Days, and would presumably like to shift a few copies of those as well.

High Speed Slimming 'shows how you can LOSE UP TO HALF A STONE A WEEK with NO drastic reduction in calories'. This is a common boast these days. Rosemary Conley's Complete Hip and Thigh Diet (which, horrifyingly, has sold more than 2 million copies) assures us that 'dieting has never been simpler — there's plenty to eat and no calories or units to count, just incredible results to enjoy'. Leslie Kenton's The Biogenic Diet promises: 'Shed unwant- ed fat without so much as counting a calo- rie!'

The progress of diet fads has interesting parallels in modern political history. During the 1960s and 1970s, the era of incomes policies and interventionist governments,

dieticians exhorted us to limit our calories and shun carbohydrates. About 15 years ago, just as single-issue campaigns such as CND and the Anti-Nazi League were com- ing into vogue, we had the single-issue diet: the cure for chubbiness was to eat a grape- fruit before every meal, or subsist on noth- ing but pineapple. (This latter wheeze, known as the Beverly Hills Diet, was found- ed on the belief that pineapples had a 'mir- acle enzyme' which would erode one's fat.) In the 1980s, with Thatcherism getting into its brisk stride, there was the wave of anti- diet propaganda led by Geoffrey Cannon's seminal work Dieting Makes You Fat — a paradoxical formulation echoing the Tory argument that egalitarianism makes you less equal. Crash diets, like the nanny state, went out of fashion.

`For a while, indeed, the very word "diet" became a four-letter word,' writes Judith Wills, who edited a slimming magazine throughout the 1980s, 'and any would-be slimmer was hard-pushed to find a diet any- where that would lose him or her weight at a rate faster than 2 1 bs/900g a week.' Then along came John Major with his dull, cut- price government; and, simultaneously, the new received wisdom was that one could trim one's embonpoint by ingesting cheap stodge, since carbohydrate calories burn up more easily than those from protein. Bread and potatoes, once strictly verboten, were suddenly back in favour. Meanwhile, the acceptable reason for banting became health rather than mere vanity.

The connection between weight-loss and politics is made explicit by some of the anti- adipose brigade. In The Green Age Diet, Rose Elliot argues that if we lived off grains, fruit and vegetables 'there wouldn't be such need . . . to cut down any more rainforest for the purpose of producing cheap beef. The pressure on our farmland would be considerably relieved, our rivers and streams would become free of nitrates and chemicals from agricultural run-off. People eating such a diet would become

lean, fit and well, because it's the right diet for their type of body. Heart disease, circu- latory diseases, cancer and all the suffering which these involve would decrease, and maybe even become a thing of the past. Hundreds of millions of pounds would be saved every year on medical care . . . '

Yes, but would it reduce your waist mea- surement? I suspect not. I was a vegetarian myself for about three years, and during that time I swelled to the size of a small barrage balloon. By the time I abandoned the experiment, last summer, I looked like a man who had been poured into his suit and had forgotten to say 'when'. Since then, I can smugly reveal, my weight has tumbled effortlessly by three stone.

Astonished friends beg me for the secret. If I marketed it as the Wheen Diet I might become as rich as Rosemary Conley; but since I can't be bothered, I offer the essen- tial details gratis to readers of The Spectator. First, eat as much meat as you like: it ought to be obvious that even a huge plate of prosciutto and salami or a double helping of roast pheasant is far less fatten- ing than a bowl of pasta with parmesan cheese. Second, think wine in immoderate quantities: it is good for the digestion as well as for one's joie de vivre. Finally, start smoking: when I gave up, seven years ago, I put on a stone almost overnight; since resuming the habit six months ago, I have lost four inches around the waist.

So there it is. If it does not work for you, perhaps you are not meant to be slim any- way. Cyril Connolly's crack that 'impris- oned in every fat man a thin one is wildly signalling to be let out' has always struck me as piffle. Corpulence suits some people: can one imagine a slender G.K. Chesterton or a herring-gutted Nicholas Soames? The great advantage of the Wheen Diet over all others is that it brings you pleasure quite regardless of its results. And, as Leslie Ken- ton would say, 'without so much as even counting a calorie'!