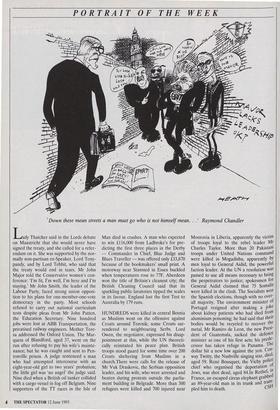 Down these mean streets a man must go who is not himself mean. . .' Raymond Chandler Lady Thatcher said in the Lords debate on Maastricht that she would never have signed the treaty, and she called for a refer- endum on it. She was supported by the nor- mally non-partisan ex-Speaker, Lord Tony- pandy, and by Lord Tebbit, who said that the treaty would end in tears. Mr John Major told the Conservative women's con- ference: 'I'm fit, I'm well, I'm here and I'm staying.' Mr John Smith, the leader of the Labour Party, faced strong union opposi- tion to his plans for one-member-one-vote democracy in the party. Most schools refused to carry out national curriculum tests despite pleas from Mr John Patten, the Education Secretary. Nine hundred jobs were lost at ABB Transportation, the privatised railway engineers. Mother Tere- sa addressed the Oxford Union. The Mar- quess of Blandford, aged 37, went on the run after refusing to pay his wife's mainte- nance; but he was caught and sent to Pen- tonville prison. A judge sentenced a man who had attempted intercourse with an eight-year-old girl to two years' probation; the little girl was 'no angel' the judge said. Nine died when a British oil tanker collided with a cargo vessel in fog off Belgium. Nine supporters of the TT races in the Isle of

Man died in crashes. A man who expected to win £116,000 from Ladbroke's for pre- dicting the first three places in the Derby — Commander in Chief, Blue Judge and Blues Traveller — was offered only £33,870 because of the bookmakers' small print. A motorway near Stansted in Essex buckled when temperatures rose to 77F. Aberdeen won the title of Britain's cleanest city; the British Cleaning Council said that its sparkling public lavatories tipped the scales in its favour. England lost the first Test to Australia by 179 runs.

HUNDREDS were killed in central Bosnia as Muslims went on the offensive against Croats around Travnik; some Croats sur- rendered to neighbouring Serbs. Lord Owen, the negotiator, expressed his disap- pointment at this, while the UN theoreti- cally reinstated his peace plan. British troops stood guard for some time over 200 Croats sheltering from Muslims in a church.There were calls for the release of Mr Vuk Draskovic, the Serbian opposition leader, and his wife, who were arrested and beaten during protests outside the parlia- ment building in Belgrade. More than 300 refugees were killed and 700 injured near

Monrovia in Liberia, apparently the victim of troops loyal to the rebel leader Mr Charles Taylor. More than 20 Pakistani troops under United Nations command were killed in Mogadishu, apparently by men loyal to General Aidid, the powerful faction leader. At the UN a resolution was passed to use all means necessary to bring the perpetrators to justice; spokesmen for General Aidid claimed that 75 Somalis were killed in the clash. The Socialists won the Spanish elections, though with no over- all majority. The environment minister of Portugal resigned after making a joke about kidney patients who had died from aluminium poisoning; he had said that their bodies would be recycled to recover the metal. Mr Ramiro de Leon, the new Presi- dent of Guatemala, sacked the defence minister as one of his first acts; his prede- cessor has taken refuge in Panama. The dollar hit a new low against the yen. Con- way Twitty, the Nashville singing star, died, aged 59. Rene Bousquet, the Vichy police chief who organised the deportation of