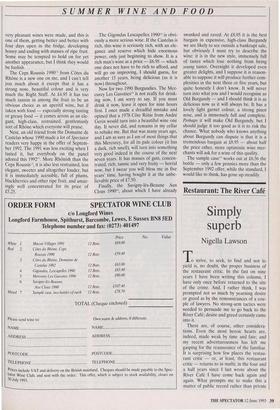 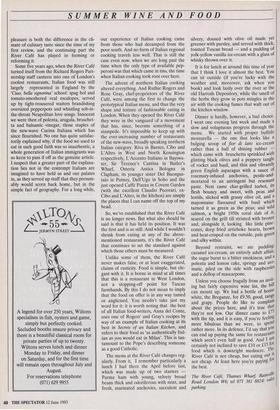 To strive, to seek, to find and not to yield is, no doubt, the proper business of the restaurant critic. In the fast on nine years I have been writing this column, I have only once before returned to the site of the crime. And, I rather think, I was prompted not so much by yearning desire or greed as by the remonstrances of a cou- ple of lawyers. No strong-arm tactics were needed to persuade me to go back to the River Café; desire and greed certainly came into it.

There are, of course, other considera- tions. Even the most heroic hearts are, indeed, made weak by time and fate; and my recent adventurousness has left me gasping for the reassurance of the familiar. It is surprising how few places the restau- rant critic — or, at least, this restaurant critic — returns to in mufti; in the four and a half years since I last wrote about the River Café I have come back again and again. What prompts me to make this a matter of public record rather than private pleasure is both the difference in the cli- mate of culinary taste since the time of my first review, and the continuing part the River Café has played in forming or reforming it.

Some five years ago, when the River Café turned itself from the Richard Rogers Part- nership staff canteen into one of London's coolest restaurants, Italian food was still largely represented in England by the `Ciao, bella signorina' school: spag bol and tomato-smothered veal escalopes, served up by tight-trousered waiters brandishing oversized pepperpots and whistling sob-in- the-throat Neapolitan love songs. Innocent we were then of polenta, arugula, bruschet- ta and balsamic vinegar, those staples of the new-wave Cucina Italiana which has since flourished. No one has quite satisfac- torily explained why, if the food we used to eat in such good faith was so inauthentic, a whole generation of Italian immigrants was so keen to pass if off as the genuine article. I suspect that a greater part of the explana- tion lies not in the contempt Italians are imagined to have held us and our palates in, as they served up stuff that they presum- ably would scorn back home, but in the simple fact of geography. For a long while, our experience of Italian cooking came from those who had decamped from the poor south. And no form of Italian regional cooking travels less well. That is still the case even now, when we are long past the time when the only type of available pep- peroni was that which came in tins, the time when Italian cooking took root over here.

The advent of northern Italian cooking altered everything. And Ruthie Rogers and Rose Gray, chef-proprietors of the River Café, were among the first to change the prototypical Italian menu, and thus the very shape and texture of fashionable eating in London. When they opened the River Café they were in the vanguard of a movement that has, since, become something of a stampede. It's impossible to keep up with the ever-increasing number of restaurants of the new-wave, broadly speaking northern Italian category. Riva in Barnes, Cibo and L'Altro in West and North Kensington respectively, L'Accento Italiano in Bayswa- ter, Sir Terence's Cantina in Butler's Wharf, Osteria Antica Bologna in Clapham, its younger sister Del Buongus- taio in Putney, Dell'Ugo in Soho and the just opened Caffe Piazza in Covent Garden (with the excellent Claudio Pecorari, ex- Cibo and L'Altro, in the kitchen) are simply the places that I can name off the top of my head.

So, we've established that the River Café is no longer news. But what also should be said is that it has held its position. It was the first and is so still. And while I wouldn't shrink from eating at any of the above- mentioned restaurants, it's the River Café that continues to set the standard against which those others must be measured.

Unlike some of them, the River Café never makes false, or at least exaggerated, claims of rusticity. Food is simple, but ele- gant with it. It is borne in mind at all times that this is a restaurant in West London, not a stopping-off point for Tuscan farmhands. By this I do not mean to imply that the food on offer is in any way tamed or anglicised. You needn't take just my word for it: it is worth noting that the best of all Italian food-writers, Anna del Conte, uses one of Rogers' and Gray's recipes by way of an example of Italian cooking at its best in Secrets of an Italian Kitchen, and refers to their food as 'as authentically Ital- ian as you would eat in Milan'. This is tan- tamount to the Pope's describing someone as a good Catholic.

The menu at the River Café changes reg- ularly. From it, I remember particularly a lunch I had there the April before last, which was made up of two starters Parma ham with young, velvety broad beans thick and odoriferous with mint, and fresh, marinated anchovies, succulent and silvery, doused with olive oil made yet greener with parsley, and served with thick, toasted Tuscan bread — and a pudding of yolk-yellow vanilla ice-cream with a glass of whisky thrown over it.

It is for lunch at around this time of year that I think I love it almost the best. You can sit outside (if you're lucky with the weather and, moreover, ask when you book) and look lazily over the river at the old Harrods Depository, while the smell of the herbs they grow in pots mingles in the air with the cooking fumes that waft out of the kitchen window.

Dinner is hardly, however, a bad choice. I went one evening last week and made a slow and voluptuous progress through the menu. We started with proper buffalo mozzarella — the one that looks like a bulging scoop of for di latte ice-cream rather than a ball of shining rubber — which came with bruschetta sprinkled with glinting black olives and a peppery tangle of rocket and basil, and thin and vibrantly green English asparagus with a sauce of rosemary-infused anchovies, pestle-and- mortared to an astringent but resonant paste. Next came char-grilled turbot, its flesh bouncy and sweet, with peas and lentils, slicked with grassy olive oil, and a mayonnaise flavoured with basil which turned it as green as the peas; and wild salmon, a bright 1950s coral slab of it seared on the grill till striated with bronze and, alongside it, looking like little pine- cones, deep fried artichoke hearts, brown and heat-crisped on the outside, pale green and silky within.

Beyond restraint, we ate pudding: caramel ice-cream, an entirely adult affair, the sugar burnt to a bitter smokiness, and a polenta and lemon cake, springy and aro- matic, piled on the side with raspberries and a dollop of mascarpone.

Unless you choose frugally from an invit- ing but fairly expensive wine list, the bill can mount up. We had a bottle of house white, the Breganze, for £9.50, good, tangy and grapy. People do like to complain about the prices here, and it's true that they're not low. Our dinner came to £73 with the tip, and it is easy, if you're feeling , more bibulous than we were, to spent' rather more. In its defence, I'd say that you can end up paying the same for restaurants which aren't even half as good. And I aril certainly not inclined to save £10 or £15 for food which is downright mediocre. The River Café is not cheap, but eating out iS not cheap. At least here you're paying for the best.