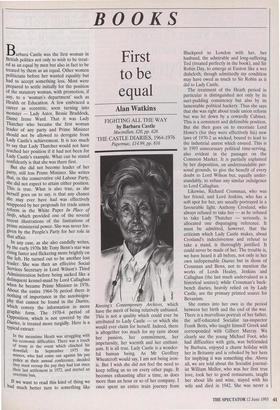 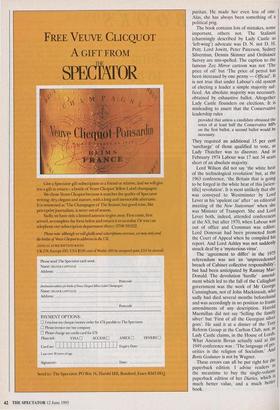 First to be equal

FIGHTING ALL THE WAY by Barbara Castle Macmillan, f20, pp. 626 THE CASTLE DIARIES, 1964-1976 Papermac, f14.99, pp. 816 Barbara Castle was the first woman in British politics not only to wish to be treat- ed as an equal by men but also in fact to be treated by them as an equal. Other women politicians before her wanted equality but had to accept something less. Most were prepared to settle initially for the position of the statutory woman, with promotion, if any, to a `woman's department' such as Health or Education. A few embraced a career as eccentric, soon turning into monster — Lady Astor, Bessie Braddock, Dame Irene Ward. That it was Lady Thatcher who became the first woman leader of any party and Prime Minister should not be allowed to derogate from Lady Castle's achievement. It is too much to say that Lady Thatcher would not have reached her position if it had not been for Lady Castle's example. What can be stated confidently is that she was there first. But she did not become leader of her Party, still less Prime Minister. She writes that, in the conservative old Labour Party, she did not expect to attain either position. This is true. What is also true, as she herself goes on to say, is that any chance she may ever have had was effectively scuppered by her proposals for trade union reform in the White Paper In Place of Strife, which provided one of the several recent illustrations of the limitations of prime ministerial power. She was never for- given by the People's Party for her role in that affair.

In any case, as she also candidly writes, by the early 1970s Mr Tony Benn's star was rising faster and flickering more brightly on the left. He turned out to be another lost leader. She was then an effective Social Services Secretary in Lord Wilson's Third Administration before being sacked like a delinquent kennel-maid by Lord Callaghan When he became Prime Minister in 1976. About the entire 1964-76 period there is nothing of importance in the autobiOgra- phy that cannot be found in the Diaries, which convey the information in more graphic form. The 1970-4 period of upposition, which is not covered by the Diaries, is treated more turgidly. Here is a typical extract:

In the meantime Heath was struggling with his economic difficulties. There was a touch of irony in the event which clinched his downfall. In September 1973 the miners, who had come out against his pay Policy at their annual conference, decided they must recoup the pay they had lost since their last settlement in 1972, and started an overtime ban.

If we want to read this kind of thing we had much better turn to something like Keesing's Contemporary Archives, which have the merit of being relatively unbiased. This is not a quality which could ever be attributed to Lady Castle — or which she would ever claim for herself. Indeed, there is altogether too much for my taste about her passion, her commitment, her impetuosity, her warmth and her enthusi- asm. It is all true. Lady Castle is a wonder- ful human being. As Mr Geoffrey Wheatcroft would say, I am not being iron- ic. But I wish she did not feel the need to keep telling us so on every other page. It becomes exhausting after a time, as does more than an hour or so of her company. I once spent an entire train journey from Blackpool to London with her, her husband, the admirable and long-suffering Ted (treated perfectly in the book), and Sir Robin Day, to emerge at Euston like a wet dishcloth; though admittedly my condition may have owed as much to Sir Robin as it did to Lady Castle.

The treatment of the Heath period in particular is distinguished not only by its suet-pudding consistency but also by its lamentable political hackery. Thus she says that she was right about trade union reform but was let down by a cowardly Cabinet. This is a consistent and defensible position. But she then goes on to excoriate Lord Howe's (for they were effectively his) new laws of 1970-2 as wicked, bound to lead to the industrial unrest which ensued. This is in 1993 unnecessary political time-serving, also evident in the passages on the Common Market. It is partially explained by her disposition, on understandable per- sonal grounds, to give the benefit of every doubt to Lord Wilson but, equally under- standably, to refuse any similar indulgence to Lord Callaghan.

Likewise, Richard Crossman, who was her friend, and Lord Jenkins, who has a soft spot for her, are usually portrayed in a favourable light. Anthony Crosland, who always refused to take her — as he refused to take Lady Thatcher — seriously, is allocated one disparaging reference. It must be admitted, however, that the criticism which Lady Castle makes, about Crosland's indecisiveness and refusal to take a stand, is thoroughly justified. It could never be made of her. The trouble is, we have heard it all before, not only in her own indispensable Diaries but in those of Crossman and Benn, not to mention the works of Lords Healey, Jenkins and Callaghan (the last much undervalued as a historical source); while Crossman's back- bench diaries, heavily relied on by Lady Castle, are the primary printed source for Bevanism.

She comes into her own in the period between her birth and the end of the war. There is a marvellous portrait of her father, the self-educated Socialist tax-inspector Frank Betts, who taught himself Greek and corresponded with Gilbert Murray. We clearly see the young Michael Foot, who had difficulties with girls, was befriended by Barbara, enjoyed a chaste holiday with her in Britanny and is rebuked by her here for implying it was something else. Above all, we are told about the Socialist journal- ist William Mellor, who was her first true love, took her to good restaurants, taught her about life and wine, stayed with his wife and died in 1942. She was never a puritan. He made her even less of one. Alas, she has always been something of a political prig.

The book contains lots of mistakes, some important, others not. The Stalinist (charmingly described by Lady Castle as `left-wing') advocate was D. N. not D. H. Pritt. Lord Jowitt, Peter Paterson, Sydney Silverman, Dennis Skinner and Ordnance Survey are mis-spelled. The caption to the famous Zec Mirror cartoon was not 'The price of oil' but 'The price of petrol has been increased by one penny — Official'. It is not true that under Labour's old system of electing a leader a simple majority suf- ficed. An absolute majority was necessary, obtained by exhaustive ballot. Altogether Lady Castle flounders on elections. It is misleading to assert that the Conservative leadership rules provided that unless a candidate obtained the votes of at least half the Conservative MPS on the first ballot, a second ballot would be necessary.

They required an additional 15 per cent `surcharge' of those qualified to vote, as Lady Thatcher was to discover. And in February 1974 Labour was 17 not 34 seats short of an absolute majority.

Lord Wilson did not say 'the white heat of the technological revolution' but, at the 1963 conference, 'the Britain that is going to be forged in the white heat of this [scien- tific] revolution'. It is most unlikely that she was conveyed to Westminster by Lord Lever in his 'opulent car' after an editorial meeting of the New Statesman' when she was Minister of Transport. She and Lord Lever both, indeed, attended conferences at the NS, but after 1970, when Labour was out of office and Crossman was editor. Lord Donovan had been promoted from the Court of Appeal when he compiled his report. And Lord Ashley was not suddenly struck deaf by a 'mysterious virus'. The 'agreement to differ' in the 1975 referendum was not an 'unprecedented breach of Cabinet collective responsibility'' but had been anticipated by Ramsay Mac- Donald. The devolution 'hurdle' amend- ment which led to the fall of the Callaghan government was the work of Mr George Cunningham, not of John Mackintosh, who sadly had died several months beforehand and was accordingly in no position to frame amendments of any description. Harold Macmillan did not say 'Selling the family silver' but 'First of all the Georgian silver goes'. He said it at a dinner of the Tory Reform Group at the Carlton Club, not, as Lady Castle claims, in the. House of Lords. What Aneurin Bevan actually said at the 1949 conference was : 'The language of pri- orities is the religion of Socialism.' And Boris Godunov is not by Wagner. These errors can all be put right for the paperback edition. I advise readers In the meantime to buy the single-volume paperback edition of her Diaries, which Is much better value, and a much better book.