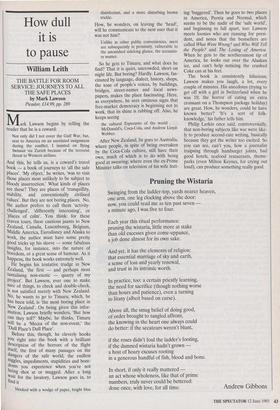 How dull it is to pause

THE BATTLE FOR ROOM SERVICE: JOURNEYS TO ALL THE SAFE PLACES by Mark Lawson Picador, £14.99, pp. 289 Mark Lawson begins by telling the reader that he is a coward:

Not only did I not cover the Gulf War, but, sent to America on an unrelated assignment during the conflict, I insisted on flying Swissair via Zurich because of the terrorist threat to Western airlines.

And this, he tells us, is a coward's travel book — a book of journeys to 'all the safe places'. 'My object,' he writes, 'was to visit those places most unlikely to be subject to bloody insurrection.' What kinds of places are these? They are places of 'tranquillity, stability, and conventionally civilised values'. But they are not boring places. No, the author prefers to call them 'activity- Challenged', 'differently interesting', or `places of calm'. You think: for these craven tours, these cautious jaunts to New Zealand, Canada, Luxembourg, Belgium, Middle America, Eurodisney and Alaska to work, the author must have some pretty good tricks up his sleeve — some fabulous insights, for instance, into the nature of boredom, or a great sense of humour. As it happens, the book works extremely well.

He begins his tentative trudge in New Zealand, 'the first — and perhaps most tantalising non-exotic — quarry of my project'. But Lawson, ever one to make Sure of things, to check and double-check, is not satisfied merely with New Zealand. No, he wants to go to Timaru, which, he has been told, is 'the most boring place in New Zealand'. On being given this infor- mation, Lawson briefly wonders, 'But how Can they tell?' Maybe, he thinks, Timaru v.', be a 'Mecca of the non-event,' the Dull Place's Dull Place'.

Before this, though, he cleverly hooks you right into the book with a brilliant description of the horrors of the flight itself, the first of many passages on the dangers of the safe world, the endless inggles impediments, stupidities and bore- ci°rns you experience when you're not being shot not shot at or mugged. After a long wait for the lavatory, Lawson goes in, to find it

blocked with a wodge of paper, bright blue disinfectant, and a more disturbing brown trickle.

How, he wonders, on leaving the 'head', will he communicate to the next user that it was not him?

Unlike in other public conveniences, users are subsequently in proximity, vulnerable to the astonished sidelong glance, the accusato- ry mutter.

So he gets to Timaru, and what does he find? That it is quiet, uncrowded, short on night life. But boring? Hardly. Lawson, fas- cinated by language, dialect, history, shops, the tone of people's voices, by buildings, bridges, street-names and local news- papers, makes the place fascinating. Here, as everywhere, he sees ominous signs that free-market democracy is beginning not to work, that its shine is rubbing off. Also, he keeps seeing

the cultural Esperanto of the world . . . McDonald's, Coca-Cola, and Andrew Lloyd- Webber.

After New Zealand, he goes to Australia, where people, in spite of being overtaken by the Coca-Cola culture, still have their own, much of which is to do with being good at swearing; where even the ex-Prime Minister talks on television of his wife feel- ing 'buggered'. Then he goes to two places in America, Peoria and Normal, which seems to be the nadir of the 'safe world', and beginning to fall apart, too: Lawson meets loonies who are running for presi- dent, and notes that the bestsellers are called What Went Wrong? and Who Will Tell the People? and The Losing of America. When he gets to the northernmost tip of America, he looks out over the Alaskan ice, and can't help noticing the crushed Coke can at his feet.

The book is consistently hilarious; Lawson makes you laugh, a lot, every couple of minutes. His anecdotes (trying to get off with a girl in Switzerland when he was 18; the horror of eating an extra croissant on a Thompson package holiday) are great. How, he wonders, could he have known better? 'It's a sort of folk- knowledge,' his father tells him.

Philip Larkin once said, controversially, that non-boring subjects like war were like- ly to produce second-rate writing, basically because they got the writer too excited. So you can see, can't you, how a journalist traipsing through hamburger joints, bad good hotels, seafood restaurants, theme- parks (even Milton Keynes, for crying out loud), can produce something really good.