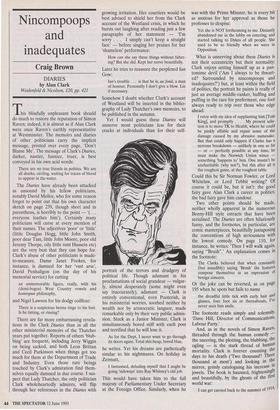 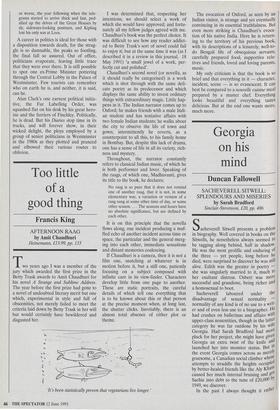 DIARIES by Alan Clark Weidenfeld & Nicolson, £20, pp. 421 This blissfully unpleasant book should do much to restore the reputation of Simon Raven; indeed, it is almost as if Alan Clark were once Raven's earthly representative at Westminster. The memoirs and diaries of other politicians carry the implicit message, printed over every page, 'Don't Blame Me'. The message of Clark's Diaries, darker, nastier, funnier, truer, is best conveyed in his own acid words:

There are no true friends in politics. We are all sharks, circling, waiting for traces of blood to appear in the water.

The Diaries have already been attacked as unsound by his fellow politicians, notably David Mellor, who for some reason forgot to point out that his own character sketch on page 239, though short and in parenthesis, is horribly to the point — `(. . . everyone loathes him'). Certainly many politicians will curse at every mention of their names. The adjectives 'poor' or 'little' (little Douglas Hogg, little John Smith, poor dear Tam, little John Moore, poor old Jeremy Thorpe, oily little runt Hussein etc) are the very best that they can hope for. Clark's abuse of other politicians is made- to-measure. Dame Janet Fookes, for instance, is damned for her 'vast arse', David Penhaligon (on the day of his memorial service) for cutting

an unmemorable figure, really, with his (demi-bogus) West Country vowels and homespun philosophy,

and Nigel Lawson for his dodgy coiffeur:

There is a suspicious henna tinge to his hair. Is he tinting, or rinsing?

There are far more embarrassing revela- tions in the Clark Diaries than in all the other ministerial memoirs of the Thatcher years put together. Reports of others `blub- bing' are frequent, including Jerry Wiggin on being sacked, and both Leon Brittan and Cecil Parkinson when things got too much for them at the Department of Trade and Industry. Even those rare beings touched by Clark's admiration find them- selves equally damned in due course. I sus- pect that Lady Thatcher, the only politician Clark wholeheartedly admires, will flip through her references in the Diaries with growing irritation. Her courtiers would be best advised to shield her from the Clark account of the Westland crisis, in which he bursts out laughing after reading just a few paragraphs of her statement — 'I'm sorry . . . I simply can't keep a straight face' — before singing her praises for her `shameless' performance:

How can she say these things without falter- ing? But she did. Kept her nerve beautifully.

Later he tries to reassure the perplexed Ian Gow:

Ian's trouble ... is that he is, au fond, a man of honour. Personally I don't give a blow. Lie if necessary.

Somehow I doubt whether Clark's account of Westland will be inserted in the biblio- graphy of Lady Thatcher's own memoirs, to be published in the autumn.

Yet I would guess these Diaries will unnerve most politicians less for their cracks at individuals than for their self- portrait of the terrors and drudgery of political life. Though adamant in his proclamations of social grandeur — vulgar- ly, almost desperately (some might even say inaccurately), adamant — Clark is entirely conventional, even Pooterish, in his ministerial worries, soothed neither by wealth nor by aristocratic languor, made remarkable only by their very public admis- sion. Stuck as a Junior Minister, Clark is simultaneously bored stiff with each post and terrified that he will lose it.

As for the Dept, I never want to go through its doors again. Total shit-heap, bored blue,

he writes. Yet his dreams are pathetically similar to his nightmares. On holiday in Zermatt, I fantasised, deluding myself that I might be going 'sideways' into Ray Whitney's old job.

This would have taken him to the full majesty of Parliamentary Under Secretary at the Foreign Office. Similarly, when he was with the Prime Minster, he is every bit as anxious for her approval as those he professes to despise: Yet she is NOT forthcoming to me. Distantly abandoned me in the lobby on entering, and started talking to Dykes of all people. She used to be so friendly when we were in Opposition.

What is unnerving about these Diaries is not their eccentricity but their normality: Clark enjoys setting himself up as a pan- tomime devil (Vim I always to be thwart- ed? Surrounded by nincompoops and inadequates?') but, at least within the field of politics, the portrait he paints is really of just an average middle-ranker, huffing and puffing in the race for preferment, one foot always ready to trip over those who edge ahead: I retoy with my idea of supplanting him [Torn King], and promptly . . . . My present solu- tion is to move TK to Health, where he could be pinkly affable and repair some of the damage caused by my abrasive namesake. But that could only happen if Clarke has a nervous breakdown — unlikely in one so fat — or — perfectly possible at any time, he must make the Norwich Union wince — something 'happens to' him. One mustn't be uncharitable (why not?), but this after all is the roughest game, at the roughest table.

Could this be Sir Norman Fowler, or Lord Whitelaw, or Lord Tebbit writing? Of course it could be, but it isn't: the good fairy gave Alan Clark a career in politics; the bad fairy gave him candour.

Two other points should be made, neither wholly apparent in the numerous Benny-Hill style extracts that have been serialised. The Diaries are often hilariously funny, and the footnotes, in particular, are comic masterpieces, beautifully juxtaposing the conventions of high seriousness with the lowest comedy. On page 110, for instance, he writes: 'Then I will walk again, saying "Brush".' An explanation comes in the footnote:

The Clarks believed that when constantlY (but inaudibly) saying 'Brush' the features compose themselves in an expression of benign concern.

Or the joke can be reversed, as on page 195 when he spots but fails to name

And, as in the novels of Simon Raven, threaded through the human comedy — the sneering, the plotting, the blubbing, the ogling — is the stark thread of human mortality. Clark is forever counting the days to his death (Two thousand? Three thousand at most') and looking in the mirror, grimly cataloguing his increase in jowels. The book is haunted, frighteningly and beautifully, by the ghosts of the first world war: I can get carried back to the summer of 1914,

or worse, the year following when the tele- grams started to arrive thick and fast, ped- alled up the drives of the Great Houses by sly, sideways-looking postmen, and Kipling lost his only son at Loos.

A career in politics is ideal for those with a disposition towards death, for the strug- gle is so damnable, the peaks so footling, the final fall so assured. Out of office, politicians evaporate, leaving little trace that they were ever there. It is still possible to spot one ex-Prime Minister pottering through the Central Lobby in the Palace of Westminster. Few tourists can remember who on earth he is, and neither, it is said, can he.

Alan Clark's one earnest political initia- tive, the Fur Labelling Order, was squashed flat on his desk by his great hero- ine and the furriers of Finchley. Politically, he is dead. But his Diaries stop time in its tracks, and will forever show, in their wicked delight, the ploys employed by a group of senior politicians in Westminster in the 1980s as they plotted and pranced and elbowed their various routes to oblivion.