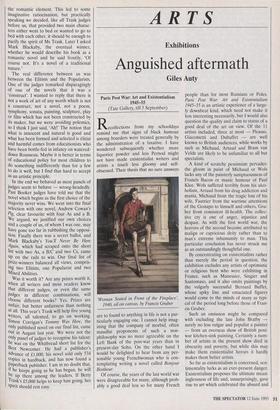 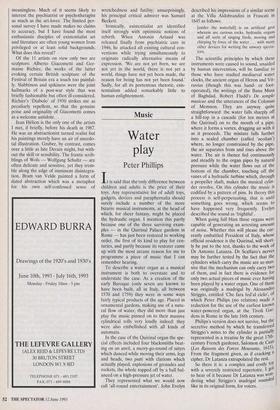 Recollections from my schooldays remind me that signs of black humour among boarders were treated generally by the administration of a laxative. I have wondered subsequently whether more liquorice powder and less Pernod might not have made existentialist writers and artists a touch less gloomy and self- obsessed. Their thesis that no sure answers `Woman Seated in Front of the Fireplace; 1940, oil on canvas, by Francis Gruber are to found to anything in life is not a par- ticularly engaging one. I cannot help imag- ining that the company of morbid, often maudlin proponents of such a non- philosophy was no more agreeable on the Left Bank of the post-war years than in present-day Soho. On the other hand I would be delighted to hear from any per- sonable young Frenchwoman who is con- templating writing a novel called Bonjour Bonheur.

Of course, the years of the last world war were disagreeable for many, although prob- ably a good deal less so for many French

people than for most Russians or Poles. Paris Post War: Art and Existentialism 1945-55 is an artistic experience of a large- ly downbeat kind, which need not make it less interesting necessarily, but I would also question the quality and claim to status of a good deal of the art on view. Of the 11 artists included, three at most — Picasso, Giacometti and Dubuffet — are well known to British audiences, while works by such as Michaud, Artaud and Bram van Velde are likely to be unfamiliar to all but specialists.

A kind of scratchy pessimism pervades: the gloom in paint of Michaud or Wols lacks any of the painterly sumptuousness of Francis Bacon or manic humour of Paul Klee. Wols suffered terribly from his alco- holism, Artaud from his drug addiction and mania, Michaud from the tragic loss of his wife, Fautrier from the wartime attentions of the Gestapo to himself and others, Gru- ber from consistent ill-health. The collec- tive cry is one of anger, injustice and despair. As with the first world war, the horrors of the second become attributed to malign or capricious deity rather than to man's extreme inhumanity to man. This particular conclusion has never struck me as an outstandingly thoughtful one.

By concentrating on existentialists rather than merely the period in question, the exhibition excludes any artists of optimistic or religious bent who were exhibiting in France, such as Manessier, Singier and Santomaso, and it also omits paintings by the vulgarly successful Bernard Buffet, whose spiky line and emaciated figures would come to the minds of many as typi- cal of the period long before those of Fran- cis Gruber.

Such an omission might be compared with excluding the late John Bratby surely no less vulgar and populist a painter — from an overseas show of British post- war kitchen-sink painting. Certainly a num- ber of artists in the present show died in obscurity and poverty, but while this may make them existentialist heroes it hardly makes them better artists.

So far as existentialism is concerned, sen- timentality lurks as an ever-present danger. Existentialism proposes the ultimate mean- inglessness of life and, unsurprisingly, gave rise to art which celebrated the absurd and meaningless. Much of it seems likely to interest the psychiatrist or psychotherapist as much as the art-lover. The limited per- sonal survey I have made makes no claims to accuracy, but I have found the most enthusiastic disciples of existentialist art and literature are often young women from privileged or at least solid backgrounds. What does this reveal?

Of the 11 artists on view only two are sculptors: Alberto Giacometti and Ger- maine Richier, the works of the latter evoking certain British sculpture of the Festival of Britain era a touch too painful- ly. Slabbiness and spikiness were the joint hallmarks of a post-war style that was briefly fashionable but often ill-considered. Richier's Diabolo' of 1950 strikes me as peculiarly repellent, so that the genuine poise and originality of Giacometti comes as a welcome antidote.

Jean Helion is the only one of the artists I met, if briefly, before his death in 1987. He was an abstractionist turned realist but his paintings merely have an air of anecdo- tal illustration. Gruber, by contrast, comes over a little as late Derain might, but with- out the skill or sensibility. The frantic scrib- blings of Wols — Wolfgang Schultz — are often delicate and sensitive, yet they trem- ble along the edge of imminent disintegra- tion. Bram van Velde painted a form of dated abstraction which was a metaphor for his own self-confessed sense of wretchedness and futility; unsurprisingly, his principal critical admirer was Samuel Beckett.

Ironically, existentialist art identified itself strongly with optimistic notions of rebirth. When Antonin Artaud was released finally from psychiatric care in 1946, he attacked all existing cultural con- ventions while trying simultaneously to originate radically alternative means of expression. 'We are not yet born, we are not yet in the world, there is not yet a world, things have not yet been made, the reason for being has not yet been found.' Sadly, for all its portentous rhetoric, exis- tentialism added remarkably little to human enlightenment.