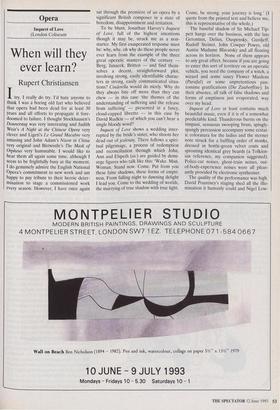 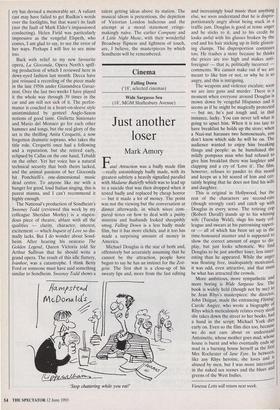 When will they ever learn?

Itry, I really do try. I'd hate anyone to think I was a boring old fart who believed that opera had been dead for at least 30 years and all efforts to propagate it fore- doomed to failure. I thought Stockhausen's Donnerstag was very interesting and Judith Weir's A Night at the Chinese Opera very clever and Ligeti's Le Grand Macabre very amusing and John Adam's Nixon in China very original and Birtwistle's The Mask of Orpheus very hummable. I would like to hear them all again some time, although I seem to be frightfully busy at the moment. I do genuinely admire the English National Opera's commitment to new work and am happy to pay tribute to their heroic deter- mination to stage a commissioned work every season. However, I have once again

sat through the premiere of an opera by a significant British composer in a state of boredom, disappointment and irritation.

To be blunt, Jonathan Harvey's Inquest of Love, full of the highest intentions though it may be, struck me as a non- starter. My first exasperated response must be: why, why, oh why do these people never ever learn from the example of the three great operatic masters of the century Berg, Janacek, Britten — and find them- selves a decent, straightforward plot, involving strong, easily identifiable charac- ters in strong, easily communicated situa- tions? Cinderella would do nicely. Why do they always bite off more than they can chew — in this case 'the themes of the understanding of suffering and the release from suffering' — presented in a fancy, cloud-capped libretto — in this case by David Rudkin — of which you can't hear a single bloody word? Inquest of Love shows a wedding inter- rupted by the bride's sister, who shoots her dead out of jealousy. There follows a spiri- tual pilgrimage, a process of redemption and reconciliation through which John, Ann and Elspeth (sic) are guided by demi- urge figures who talk like this: 'Wake. Man. Woman. Stand now. Come. Put from you these false shadows, these forms of empti- ness. From falling night to dawning delight I lead you. Come to the wedding of worlds, the marrying of true shadow with true light.

Come, be strong, your journey is long.' (I quote from the printed text and believe me, this is representative of the whole.)

The baneful shadow of Sir Michael Tip- pen hangs over the business, with the late Gerontius, Delius, Ouspensky, Gurdjeff, Rudolf Steiner, John Cowper Powys, old Auntie Madame Blavatsky and all floating across its horizon. None of them appears to any great effect, because if you are going to enter this sort of territory on an operatic vehicle, you need the company of a witch, a wizard and some saucy Flower Maidens (Parsifal) or some unpretentious pan- tomime gratifications (Die Zauberflote). In their absence, all talk of false shadows and forms of emptiness just evaporated, way

Inquest of Love at least contains much beautiful music, even if it is of a somewhat predictable kind. Thunderous bursts on the timpani, sensuous swooping brass, spingly- spangly percussion accompany some ecstat- ic coloratura for the ladies and the sterner note struck for a baffling order of monks, dressed in bottle-green velvet coats and sprouting identical grey beards (a Tolkien- ian reference, my companion suggested). Police-car noises, ghost-train noises, out- of-body-experience noises were all pleas- antly provided by electronic synthesiser.

The quality of the performance was high. David Pountney's staging shed all the illu- mination it humanly could and Nigel Low- ery has devised a memorable set. A valiant cast may have failed to get Rudkin's words over the footlights, but that wasn't its fault (nor the fault of Mark Elder's impassioned conducting). Helen Field was particularly impressive as the vengeful Elspeth, who comes, I am glad to say, to see the error of her ways. Perhaps I will live to see mine too.

Back with relief to my new favourite opera, La Gioconda, Opera North's spiff ing production of which I reviewed here in dewy-eyed fashion last month. Decca have just reissued a recording of the piece made in the late 1950s under Gianandrea Gavaz- zeni. Over the last two weeks I have played it the whole way through 39 times in the car and am still not sick of it. The perfor- mance is couched in a heart-on-sleeve style unintimidated by genteel Anglo-Saxon notions of good taste. Giulietta Simionato and Mario del Monaco go for each other hammer and tongs, but the real glory of the set is the thrilling Anita Cerquetti, a now forgotten dramatic soprano, who takes the title role. Cerquetti once had a following and a reputation, but she retired early, eclipsed by Callas on the one hand, Tebaldi on the other. Yet her voice has a natural technical security that both theirs lacked, and the animal passions of her Gioconda hit Ponchielli's one-dimensional music dead centre. To anyone like me with a hunger for good, loud Italian singing, this is purest manna, and I can't recommend it highly enough.

The National's production of Sondheim's Sweeney Todd (reviewed this week by my colleague Sheridan Morley) is a stupen- dous piece of theatre, ablaze with all the qualities — clarity, character, interest, excitement — which Inquest of Love so dis- mally lacks. But I do wonder about Sond- heim. After hearing his oratorio The Golden Legend, Queen Victoria told Sir Arthur Sullivan that he should write a grand opera. The result of this idle flattery, Ivanhoe, was a catastrophe. I think Betty Ford or someone must have said something similar to Sondheim. Sweeney Todd shows a talent getting ideas above its station. The musical idiom is pretentious, the depiction of Victorian London ludicrous and the attempt at a moral statement cringe- makingly naïve. The earlier Company and A Little Night Music, with their wonderful Broadway flipness and lightness of touch, are, I believe, the masterpieces by which Sondheim will be remembered.